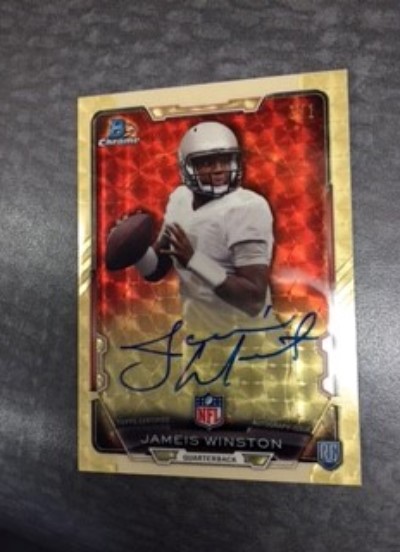 Winston could be the top pick in the April 30 NFL Draft. He will be featured in all of Topps’ 2015 products, according to the company.

“We are excited to add a player of Jameis Winston’s caliber to the Topps family,” Topps Football Brand Manager Kevin Eger said in a release. “Winston is an electrifying player and collectors always look forward to a player’s first Topps Rookie Card. Winston will lead a thrilling 2015 rookie class, and we look forward to working with him in our 60th year of football cards.”

His cards will first appear in Bowmanâ Football, which releases in June, the company said.

Winston was nearly flawless in winning the 2013 Heisman Trophy and leading Florida State to the national championship as a freshman. In his sophomore season, he led the Seminoles to an undefeated regular season before a loss to Oregon in the first College Football Playoff.

Winston has the size and arm to be an NFL and hobby star. He often got Florida State in trouble with interceptions last season but was remarkably good in the clutch, playing his best with the game on the line.

Kris Bryant gets his own Topps wall ...