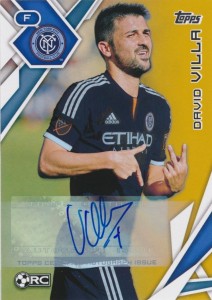 David Villa is regarded as one of the world’s greatest soccer stars and his first autograph cards in a New York City FC uniform have been coming out of packs of the recently-released 2015 Topps MLS product.

Now in his first year with the expansion club, Villa’s international and club experience includes a FIFA World Cup with Spain in addition to UEFA Champions League and La Liga crowns. Spain’s all-time leader in goals, he signed with NYC FC last year and is their first team captain. He also scored the first goal in franchise history against Orlando City SC back on April 8.

How many different certified autograph cards of Villa are on the market? Find out after the jump.
According to the Beckett.com database, there are presently just 69 cards of Villa available to collectors at this time and just seven of them are certified autographs. In fact, six of those seven signed cards can be found in packs of 2015 Topps MLS. A copy of the Gold parallel numbered 7/25 recently closed on eBay when the seller accepted the best offer after initially listing it for $199.99.

Tony Gwynn memorabilia to be sold by ...