Pre-ordering for the ShopTopps.com-exclusive 2012 Topps Heritage High Number set has begun today, its originally announced date, but the sets will not begin shipping until Nov. 6, according to the company.

While a checklist was not yet released by Topps, the sets will cost $99.95 on the company’s website and one previously unannounced feature also will be found inside the sets.

There will be red-ink autographs limited to just 10 copies among the autographs that will be seeded one per set. In addition, Topps has announced that only 1,000 sets will be made. The set will include the players who missed the checklist for the early season release — Washington Nationals rookie Bryce Harper for starters. It also will include another of Ichiro Suzuki‘s first cards as a member of the New York Yankees.

Among the rookies slated to sign for the release include Harper, Oakland’s Yoenis Cespedes, Texas ace Yu Darvish and Boston’s Will Middlebrooks among others.

The release is the second online-only exclusive this year as it released 2012 Topps Mini — a shrunken version of its flagship set — in August.

Collectors can order a maximum of 20 sets per household. 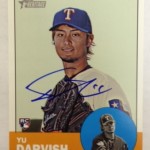 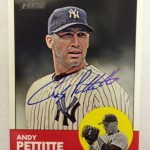