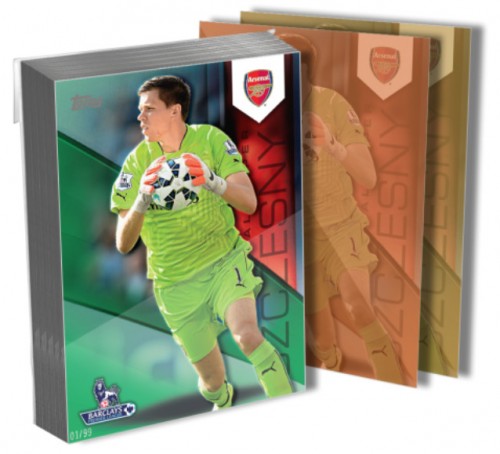 A few months ago, Topps released its sophomore Premier Gold Soccer effort and the stars of the Barclay’s Premier League are back once again with a special oversized edition that may generate some excitement among fans and collectors.

There will be four different types of set available and it includes all 150 base cards along with 10 New Signings, 20 Captains and 20 Future Stars inserts. The basic edition is limited to 199 copies and it retails in the Topps online store for $100. Measuring 5″ x 7″, there also three other scarcer parallel sets coming in Green (numbered to 99), Purple (numbered to 49) and Black (numbered to 10). Retail prices on those collections will be $150, $250, and $500, respectively.

What else will collectors receive when they purchase a set? Find out after the jump.

As a special bonus for everyone purchasing a set, Topps will include two, three, or four parallels that are extremely limited. The base and Green sets will include two parallel cards that come in either Orange (numbered to 3) or the one-of-one Gold. Those purchasing the Gold set will receive three extra oversized cards and the Black will get some extra value with four parallels given as a bonus.

Breaking down sets could prove to be very lucrative for sellers as well as the per-card price for even the Black edition is less than $2.50 for a card limited to 10 copies once the rarer parallels are factored in.