2018 Panini Contenders Draft Picks Baseball recently went live and it’s loaded with prospect autographs, many of whom are signing for the first time.

Like the Elite Extra Edition, Panini Contenders Draft Picks is often overlooked, but the autograph checklists for both products are always extremely deep and provide some great value for collectors. You’ll find studs like Vladimir Guerrero Jr, Fernando Tatis Jr, Forrest Whiteley and Kyle Tucker in this year’s product. But let’s take a look at some of the top selling Draft Pick autographs.

Not only is this Bart’s first certified autograph card, his first cards of any kind can be found in 2018 Contenders Draft where he’s got 24 in total. Selected second overall by the Giants, Bart spent the year in Rookie and Low-A ball hitting .294 with 13 home run and 40 RBI in 51 games. 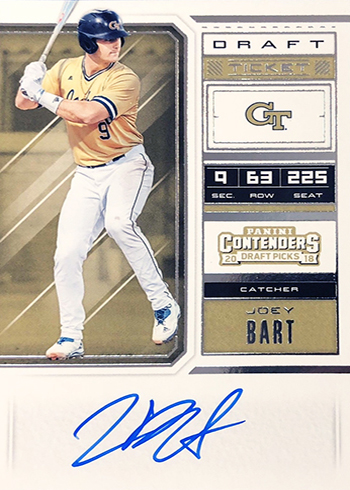 Yet another first-time signer, Larnach was selected 20th overall by the Twins in the 2018 MLB June Amateur Draft. In his first 42 professional games, he hit .303 with 5 home runs and 26 RBI. 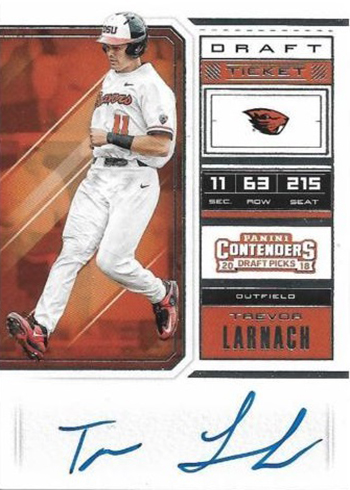 The third overall pick in last year’s draft, Bohm is part of the Phillies franchise. This is Bohm’s first certified autograph card as well. noticing a pattern here? It’s quite an accomplishment for Panini to secure the first autographs of the second and third overall picks. In 40 games in 2018 – split between Rookie and Low-A – Bohm hit .252 with 17 runs batted in. 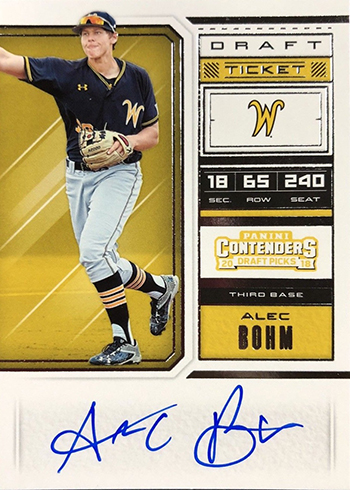 Gritty Gets Some Hockey Cards