2018 Bowman Draft released last week and, already, it’s the hottest product on the market. Love them or hate them, Bowman Chrome and Bowman Chrome Draft Autographs always seem to dominate the monthly Beckett Baseball Hot Lists. So, after the first full weekend of sales, let’s take a look at three of the early best sellers from 2018 Bowman Draft.

Drafted 17th overall by the Cardinals in last June’s Draft, Gorman played in 63 games last season between Rookie and Class A, hitting .291 with 17 home runs and 44 RBI. MLB.com ranked the 18-year-old as the 73rd best prospect in baseball at the end of the season. Gorman has 275 cards in the Online Price Guide, many of which come from the 2017 Leaf Metal Perfect Game product. He also has certified autograph cards in 2017 Panini Contenders as well as the recently released 2018 Elite Extra Edition. 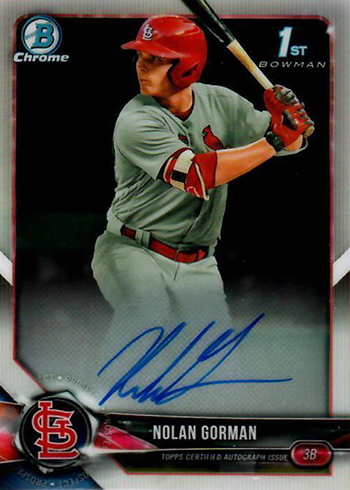 The White Sox made Madrigral the fourth overall pick in the 2018 draft. He played 43 Minor League games last season, hitting .303 with 16 RBI and eight stolen bases. He was rated as the 49th best prospect in baseball by MLB.com at the end of the year. For a player just drafted, it’s amazing that Madrigal already has 392 cards in the Online Price Guide. As a member of USA Baseball, his first cards appeared in 2012 USA Baseball. His 2012 USA Baseball 15U National Team Signatures card, limited to 299 copies, is priced at an affordable $15. 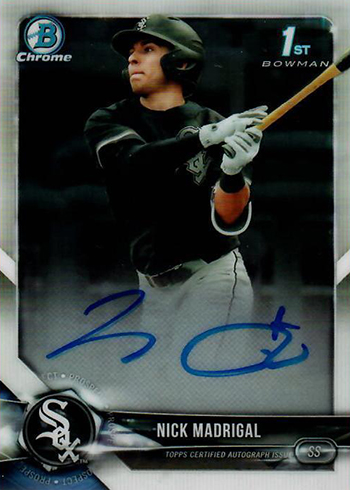 MLB.com ranked Kelenic the 62nd best prospect in baseball at the end of 2018. The sixth overall pick by the Mets played in 56 Rookie League games last season, hitting .286 with six home runs and 42 RBI. Much like Gorman and Madrigal, Kelenic has plenty of cards in the Online Price Guide – 317 to be exact. In addition to his 2018 Bowman Draft cards, he appears in several different Leaf, Panini and USA Baseball products. 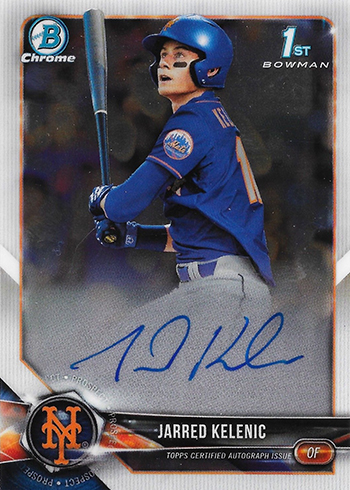