One of baseball’s good guys is gone.

San Diego Padres legend Tony Gwynn, a member of the 3,000-hit club and a first-ballot Hall of Famer in 2007, died Monday after batting cancer. He was 54.

Nicknamed “Mr. Padre,” he was an All-Star in 15 of his 20 big-league seasons in which he hit .338 and won eight National League batting titles — all with the Padres. While his career average ranks 20th in MLB history, he also was a five-time Gold Glove winner playing outfield.

“Major League Baseball today mourns the tragic loss of Tony Gwynn,” said MLB Commissioner Bud Selig in a statement. “The greatest Padre ever and one of the most accomplished hitters that our game has ever known, whose all-around excellence on the field was surpassed by his exuberant personality and genial disposition in life. … For more than 30 years, Tony Gwynn was a source of universal goodwill in the National Pastime, and he will be deeply missed by the many people he touched. On behalf of all of our Clubs, I extend my deepest condolences to Tony’s wife Alicia, their son Tony Jr. of the Phillies, their daughter Anisha, the Padres franchise, his fans in San Diego and his many admirers throughout Baseball.” 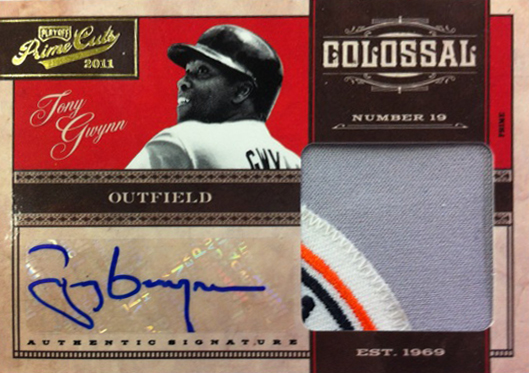 In past interviews, Gwynn attributed his cancer — which he had been fighting for several years and more than a dozen surgeries — to his admitted addiction to smokeless tobacco.

“Of course it caused it,” he told ESPN.com, “I always dipped on my right side.”

On cardboard, Gwynn was an accessible and collectable superstar. He appears on 8,846 different cards in the Beckett.com database (click here for a checklist or OPG) and they are valued at more than $122,550 excluding rarities. He appears on 2,748 different game-used memorabilia cards and was a steady signer through the years with 1,684 different autographs.

His Rookie Cards appear in the four 1983 releases — Topps, O-Pee-Chee, Donruss and Fleer — with his Topps and O-Pee-Chee cards the most in-demand at $25 or less before the news. His other two RCs typically sell for $15 (Donruss) and $12 (Fleer).

After retiring from baseball in 2001, he had worked as the baseball coach at San Diego State where he was an alum — playing basketball and baseball — and coached the likes of Stephen Strasburg in recent years. The school’s baseball stadium was named after him in 1997.

Gwynn is survived by his wife, Alicia, and two children — a daughter, Anisha, and his son, Tony Gwynn Jr., who is a member of the Philadelphia Phillies.