Stan “The Man” Musial has suffered from what seems like a lag in value in the market. Not appearing on many regular cards during the 1950s surely didn’t help his collectability, either.

His Rookie Card is found in the inaugural 1948 Bowman Baseball set. Unfortunately, the set suffers from being one of the last black and white sets produced.

Eventually there will come a time where The Man will get the hobby respect he deserves. But until that day comes, there are some great cards out there that are bargains.

One card I have always liked is the 1949 Leaf Stan Musial. 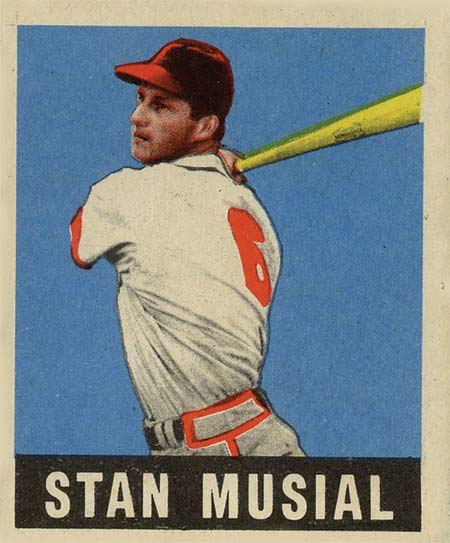 I love the shot of Stan on the card and the garish colors just add to the appeal of the card for me.

But it’s because of those colors that one would think it would be difficult to counterfeit. What looks primitive in terms of printing to us today actually serves to offer some protection against the forgers. For example, to print a T206 today and produce results that are near identical to an original card would be next to impossible. The reason is because of technology and how it progressed throughout the 20th century. The imperfections produced in the old printing technology just cannot be replicated with the technology of today.

Another part of the vintage card that is difficult to replicate is the card stock. The color can be close, the thickness can be close but to find card stock that is near identical to the original today would be cost prohibited at best and impossible in most cases. Not only does the look and feel of the card stock have to be replicated, but so too do characteristics of the stock that can be tested. Without going into the fine details, depending on the age of the card, some stock cannot be reproduced today.

But that does not stop the card counterfeiting crook. In the 1980s and ’90s, most counterfeit cards were professionally printed and not hand made individually. With advancements in home computers and home computer printing in the early 2000s, there was a shiftin the type of fakes we were seeing. We began to see cards that were created one at a time. Real cards were being scanned onto a computer and printed on a wide variety of card stocks and papers.

The 1949 Leaf card in this article is just one of those types of fakes. This card was printed from a computer onto a cardboard stock. 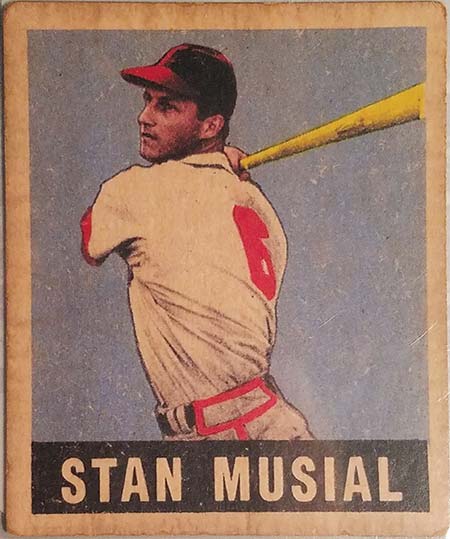 A counterfeit 1949 Leaf Musial. Looks real at first glance, but once in hand it becomes clear that it’s a fake.

Fortunately for us, the card collectors and buyers, no matter how good someone’s Photoshop skills are, the printer just can’t reproduce the right results.

At first glance, this card does not look terrible. The colors actually appear to be pretty close. The stock color looks a bit off with the staining but that isn’t a deal-breaker yet.

As we take the card out of the holder, red flags start flying. The stock has the wrong feel to it. The weight is off as well as the surface. Under the loupe, we see the ink is not correct. Where ink should be solid, we can see a pattern in the printing. 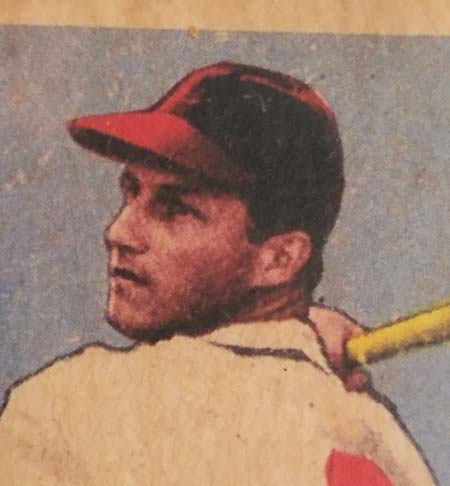 Close up of the top of the counterfeit.

If you have handled 1949 Leaf Baseball cards before, (and if you haven’t, why not?) your brain will almost instantly tell you something is wrong with the surface of this card. Like with any vintage set, the more you handle and examine authentic examples, the more your brain builds a memory of what an authentic card is supposed to feel like. It takes years to gain that skill but any senior grader has to have it. It’s that sixth sense of cards, one of the most valuable skills a card grader can have!

The overall image on the front of the card appears fuzzy and edges that should have some defi nition do not.

Surprisingly, the back is the better side of this fake. One reason for that is the print on the back is all in solid black ink. On a porous stock, the results are harder to spot without further examination.