Just over a month into the 2019 season and the Brewers’ Christian Yelich is neck and neck with Cody Bellinger in the National League MVP race. In terms of the hobby, there are few veteran players – if any – who are hotter.

As is the case when any player gets hot, collectors seem to flock to the player’s first Bowman Chrome Autograph card, and Yelich collectors (and those jumping on the bandwagon) have been no different. His 2010 Bowman Chrome Draft Prospect Autographs card has skyrocketed to new heights in recent weeks. 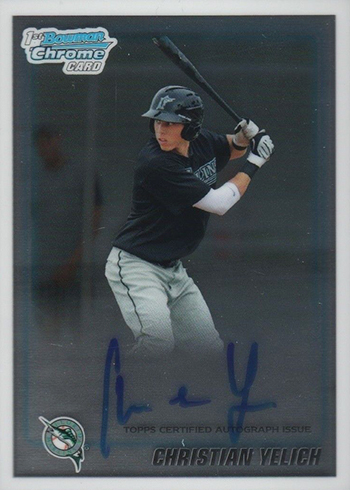 We analyzed nearly 1,000 raw secondary market sales on the card, going back its debut in 2010 in order to see just how much the card has increased in the value over the last eight-plus years.

2010 Bowman Chrome Draft came out December, 2010. Yelich, who was taken with the 23rd overall pick by the Marlins in the June draft went largely unnoticed upon the product’s release. He was overshadowed by someone you may have heard of, Manny Machado, who was taken second behind Bryce Harper. 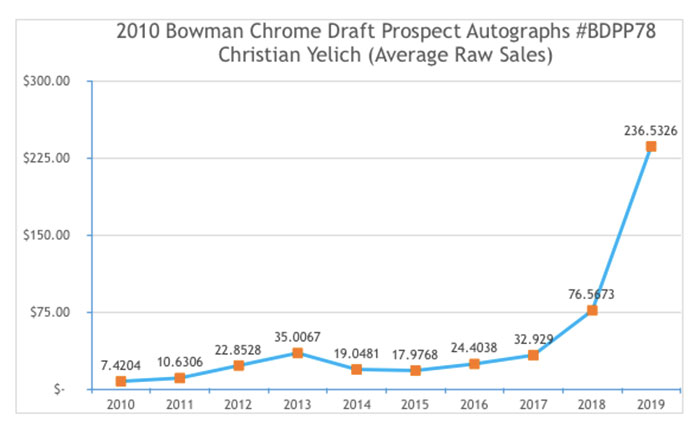 The card debuted in the Price Guide in January 2011 as a “listed” card, but was valued at just $8-$20. The average selling price of raw copies in 2010 – albeit just one month’s worth of data – was only $7.42. Over the next few years, the card would slowly begin to creep up in value, hitting an average selling price of $35.01 in 2013, the year Yelich made his Major League debut. As is often the case, when his numbers didn’t light the world on fire, collectors moved on and the average selling price was as low as $17.98 in 2015.

The card began to rebound in 2016, as Yelich would finish 19th in MVP voting and won a Silver Slugger Award. This momentum would carry over to 2017 when the average value approached $33. He was traded to the Brewers in the 2017 offseason and the card – much like Yelich’s career – really broke out in 2018. On the field, he hit .326 with 36 home runs and 110 RBI en route to a runaway victory in the NL MVP Award race. In the hobby, the average selling price more than doubled to $76.57 and the card finished the year priced at $60-$150 in the Online Price Guide.

With Yelich’s smoking start to the 2019 season, the card’s average selling price has more than tripled over 2018, up to $236.53 In the last month, raw sales have been averaging $319.33. Not too shabby for a card that was regularly selling for $8 eight-and-a-half years ago.

Where the card goes from here is anyone’s guess. Should he keep up his torrid home run pace and hit 70-plus home runs, the card will surge much, much higher — potentially topping $1,000. Should he go into a massive slump and “only” hits 30 home runs, the card probably stays flat. If something catastrophic happen like a long-term, season-ending injury, the card could be back to selling under $100 this time next year.

Whatever happens, it’s going to be fun to watch.