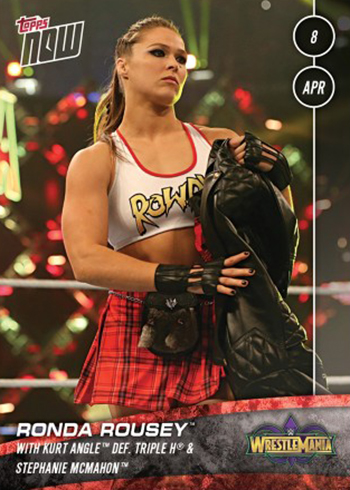 Ronda Rousey is a champion again, this time in the wrestling ring. Last night at SummerSlam, the former UFC headliner captured the Raw Women’s Championship in decisive fashion over Alexa Bliss.

While Rousey has a lot of UFC cards, her list of WWE cards is small. Her lone appearance thus far for North American audiences is her 2018 Topps Now WWE card highlighting here WrestleMania win (that’s likely to change with the SummerSlam Topps Now cards). The basic version of the print-on-demand card sold 1,342 copies in 24 hours. Not only is it a record for Topps Now WWE, but it’s more than four times the second highest seller.

Besides the regular version, there’s a relic version that has pieces of the WrestleMania canvas embedded in them. These are limited to versions numbered to 25 and a one-of-one.

Her first pack-inserted cards for collectors in North America are slated for 2018 Topps WWE Women’s Division, which is scheduled for October.