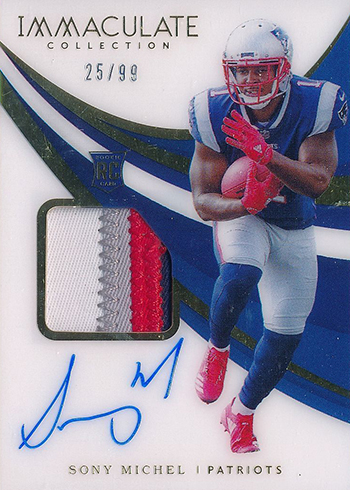 Following a dominant win over the Chargers, the New England Patriots are off to another Conference Championship. And while one could dissect every move of Tom Brady’s, perhaps the more interesting development has been the playing of the Pats’ ground game.

It played a huge role in New England’s win this week, most notably by Sony Michel’s three touchdowns and 129 rushing yards. In a year when quarterbacks and Saquon Barkley dominated the rookie spotlight, Michel flew somewhat under the radar. But the Georgia alum ran for a solid 931 yards. And as New England’s offense, and Tom Brady’s role, evolves over the next couple of years, there’s some added intrigue on what Michel could do.

Michel has a lot of Rookie Cards already ranging from the affordable to the high-end. Of the latter, the 2018 Immaculate Collection Sony Michel is one of the top picks, boasting both an on-card autograph and a patch. Even after National Treasures and some of the other super-premium releases that come at the end of the football card season arrive, this should still be one of the most coveted.