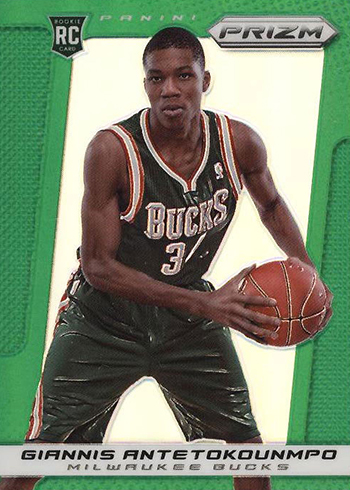 In the midst of a monster season worthy of MVP consideration, Giannis Antetokounmpo scored a career-high 52 points. It came in a losing effort, though, as the Bucks fell to the Philadelphia 76ers in a marquee match-up of two of the Eastern Conference’s best. Antetokounmpo is averaging 27.5 points per game for the season and Milwaukee is still three games up on the second-place Raptors in the East.

Giannis has a lot of Rookie Cards out there. And among those are plenty of parallels. 2013-14 Panini Prizm has become one of the biggest in that regard with its Refractor-like Prizms. Green Prizms are not be at quite the same level as the cornerstone Silver cards as far as value usually goes. That said, they do command more than many other colors, including some with serial numbers. They’re exclusive to retail packs.

Like all of Antetokounmpo’s early cards, prices on this card have been growing steadily over the past few years. But this is also an instance where it’s just not the player. Prizms have become a driver in the hobby and collectors are starting to make their choices over which ones they prefer. Bonus points for this one with the color matching the jersey.