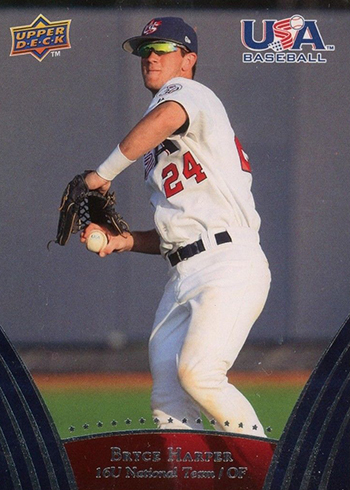 It’s a new beginning for Bryce Harper after agreeing to a monster 13-year deal with the Philadelphia Phillies. It’s hard to believe that even though he’s only 26-years old, Harper’s baseball card beginnings were a decade ago.

The premium factory set was an autograph-heavy affair. Harper was part of that with a couple of different scare signature cards. But there’s also the base set.

Despite being a somewhat regular card, the 2008-09 Upper Deck USA Baseball Bryce Harper command significant attention today. That’s what can happen when a superstars’s first card pre-dates any MLB cards by several years. The fact that the set has a print run of 2,655 sets also helps.