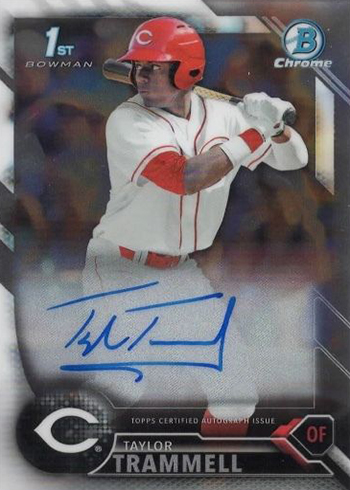 Many of baseball’s top prospects took to the field in Washington for the annual All-Star Futures Game. It was a high-scoring affair with Team USA defeating the World Team 10-6. Both teams combined for eight home runs.

Two of those came from Yusniel Diaz. But it was Taylor Trammell who took the game’s MVP honors after going 2-2 with a homer and a triple.

Trammell is one of the top-ranked prospects in the Reds system. He was drafted 35th overall in 2016. The outfielder has spent 2018 with the high-A Dayton Tortugas. Trammell is currently hitting .295 with six home runes, 16 stolen bases and 29 RBI in 78 games. Collectors already have lots of Taylor Trammell cards to consider. However, his key one is his 2016 Bowman Chrome Draft autograph. Some of Trammell’s other early autographs can be found in 2016 Elite Extra Edition, 2016 Leaf Metal Draft, and 2016 Leaf Trinity.