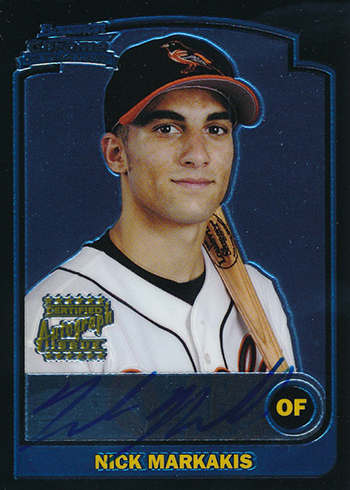 It took a while — 12.5 seasons — but Nick Markakis is finally an All-Star. The Atlanta outfielder was voted into the game after a stellar start to 2018 that not has him on pace for career highs in several categories. He’s also helping anchor a youthful Atlanta team that seems primed for the postseason this year and beyond.

Markakis has long been a star in baseball. At times he seemed on the cusp of superstardom. But it’s translated more consistently into being really good. Even with a pair of Gold Gloves to his name, it hasn’t translated into a spot in the Mid Summer Classic until now.

Markakis has a pair of Rookie Cards, the biggest of which is his autograph in 2003 Bowman Chrome Draft. Releasing before the MLB and MLBPA changed their rules that players must play in a major league game in order to get a base card, it came out just a few months after the draft.