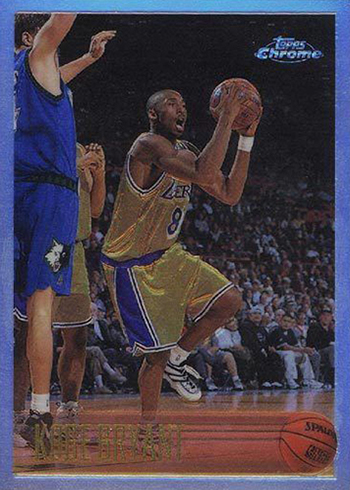 With the Lakers retiring Kobe Bryant’s numbers, it marks another chapter in a storied career. Sure, Bryant’s legacy includes controversy and rivalries, but there’s no denying his ability to win. He helped Los Angeles to five NBA titles and was named Finals MVP twice.

Bryant’s other accolades include a pair of Olympic gold medals, NBA All-Star 18 times, named to the All-NBA First Team 11 times and NBA MVP in 2008. And all that doesn’t include being one of basketball’s key international ambassadors for the last 20 years.

Kobe Bryant has a lot of different cards. Going back to his rookie season, none are more coveted than the 1996-97 Topps Chrome Kobe Bryant Refractor. The card has a couple of things going for it.

For starters, it was the first season for Topps Chrome Basketball. Available originally as a retail-exclusive, it got hot very quickly and has continued to be a market driver ever since.

The basic version of the card is considered to be the top Kobe Bryant Rookie Card. With Refractors inserted 1:12 packs and 220 in the set, they weren’t easy to come by then. Today, they’re even harder. And when they do, collectors can expect to spend thousands. Sometimes, it’s tens of thousands.

The likely next stop for Kobe? The Hall of Fame.