Shohei Ohtani has set a high bar early as far as print runs go for the Topps Living Set. A total of 20,966 copies were sold on the Topps website between March 28 and April 3. 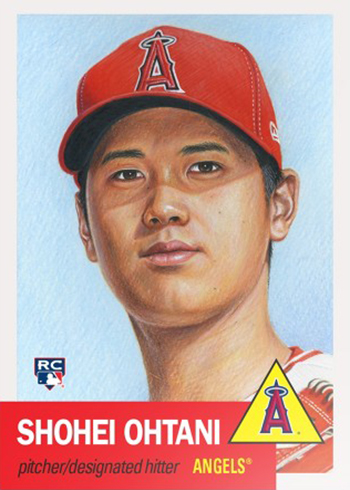 Although still very early in the ever-evolving set’s run, the Topps Living Set Shohei Ohtani has, thus far, dwarfed all other cards on the checklist. Aaron Judge, the second most plentiful card so far, has 13,256 copies.

It also surpasses one of Topps’ other major online initiatives, Topps Now. Entering its third year, the record for that line is another Shohei Ohtani card. One released in early December, shortly after the Japanese superstar signed with the Angels, sold 17,323 copies. It’s worth noting that was over a 24-hour span, not a week like the Topps Living Set.

“With Ohtani coming from Japan, there are many baseball fans watching him around the globe, and this particular card will be the centerpiece of many collections,” said Susan Lulgjuraj,  Topps marketing communication manager. “It shows that baseball is truly a global sport.”

One of the keys behind the Topps Living Set is that it’s intended to evolve indefinitely. It’s a set that’s going to span years. And once a player is included on the checklist, they won’t get another card unless they change teams.

So this is the only Living Set card Ohtani will have as long as he’s with the Angels.

“It’s been great to see people collecting them with their families making it a cross-generational set that we know will last for years,” said Lulgjuraj.

Based somewhat on the 1953 Topps Baseball design, each Topps Living Set card is drawn by Japanese artist Mayumi Seto. She has worked with Topps on multiple sets in the past including 2016 and 2017 Topps Transcendent Baseball, as well as 2017 Topps Gallery Baseball.

Each week, a new group of three cards is made available on the Topps website. After that week, the print run is set based on the number sold.

Through its first three weeks, the Topps Living Set has seen production numbers range from Ohtani’s high of almost 21,000 copies to a low of 2,678 for Nick Markakis.

“We’re are really excited about Topps Living Set. Since it started — just three weeks ago  — there has been a tremendous response to this set because of the exceptional artwork by Mayumi Seto, the idea that it never ends and that the cards are only available for one week,” Lulgjuraj noted.

During its fourth week, the Topps Living Set introduced retired players to the checklist with Derek Jeter. According to Lulgjuraj, past stars will appear in future weeks but not very often.

In Case You Wanted to Own Russell ...