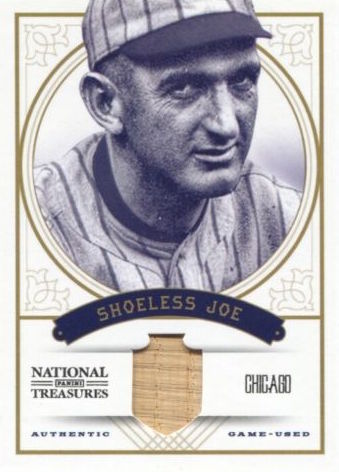 One of baseball’s banned legends might appear on more baseball cards soon — if a big announcement comes from Major League Baseball on Tuesday.

He’s “Shoeless Joe” Jackson and he’s one of the Black Sox players banned from the game for life — and beyond — for throwing the 1919 World Series. The “eight men out” presently will not appear on any officially licensed MLB trading cards — just like any other members of MLB’s Ineligible List.

That’s a group that includes Pete Rose, who has admitted to gambling on the game and his team. It includes Benny Kauff, who was banned in 1921 for stealing a car and receiving stolen cars. It includes “Shufflin’ Phil” Douglas, who once wrote a drunken letter offering to join the Chicago Cubs and walk out on his New York Giants because he hated manager John McGraw.

Jackson landed on the list along with Eddie Cicotte, Chick Gandil, Lefty Williams, Swede Risberg. Fred McMullin. Hap Felsch and Buck Weaver. The only baseball cards they can appear on today are made by Panini America and other non MLB-approved companies.

The proof of Jackson’s role in the fix isn’t ironclad — a judge acquitted him of taking a $5,000 bribe — but he was banned like his teammates by the commissioner. However, the curator of the Shoeless Joe Jackson Museum in Greenville, S.C., said on Monday that there will be an announcement — yes or no — regarding his status to come on Tuesday. It had sent letters to MLB Commissioner Rob Manfred five times regarding Jackson’s reinstatement.

If reinstated, Jackson could be considered for induction into the Baseball Hall of Fame via its Pre-Integration Era Committee. He could also be a prime candidate to appear on baseball cards from Topps because he’s a pretty strong seller. He appears on 341 different cards in the Beckett database valued at more than $526,000 excluding rarities. His biggest potential among today’s cardboard landscape would be for game-used cards. He has 94 different cards and the most common ones typically sell for between $80 to $300.

Could it happen? We’ll have to wait and see. If it does, it could make for some interesting new developments on cardboard.

Update: It’s a no. Manfred said it “would not be appropriate for me to reopen this matter” in a letter to the Museum.