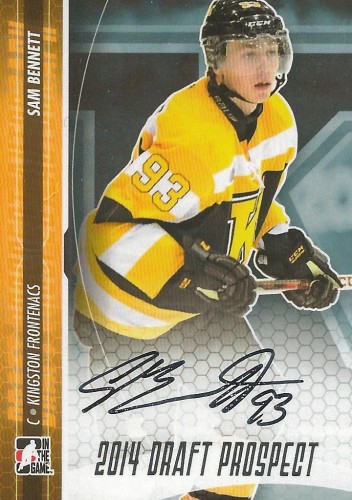 Early 2015-16 hockey card releases from Upper Deck will have another big rookie card to chase as it has been announced that Sam Bennett will be joining the Calgary Flames lineup for the rest of the season instead of being sent to their AHL affiliate in Adirondack.

The fourth overall pick in the 2014 NHL Entry Draft, Bennett was initially on track to make his pro debut early in the 2014-15 campaign before shoulder surgery put him on the injured list for five months. Back in February, he returned to action with the OHL’s Kingston Frontenacs and recorded 24 points over 11 games before his team was swept in a first round playoff battle with the North Bay Battalion.

How many different cards of Bennett have been released to date? Find out after the jump.

Bennett is no stranger to hockey card collectors as he was part of several In The Game releases in recent years and had a heavy presence within packs of 2014-15 Upper Deck Team Canada Juniors. At present, he has 109 different cards in the Beckett.com database with a total value of $588.90 (excluding rarities).