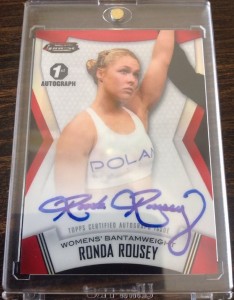 Beckett.com reported on Friday that a 2012 Topps Finest Red Refractor Autograph 1/1 of Ronda Rousey  was up for auction on eBay. The auction was at $5,900 after 56 bids.

Well, the auction has concluded and the card has sold. The final number is staggering and has most likely set a record for autographed UFC cards if it is paid for — $10,103.