Ronda Rousey was handed her belt on Dec. 6, and given her first UFC opponent. She will fight Liz Carmouche in UFC 157 this February in the first female fight for the country’s most top MMA league.

With Rousey’s success in Strikeforce and the Olympics (first American woman to medal in judo), it’s no surprise her cards are among the most popular in 2012 UFC Bloodlines.

Rousey’s cards are limited based on the small amount of products she is in. She has just 49 cards, according to the Beckett database (click here to see a checklist and OPG), and 23 of those are autographs.

Her UFC Finest Gold Refractor Autograph numbered to 25 was her hottest card until Bloodlines came out. Finest had her first autograph, but Bloodlines has everything else: mat cards, relics and printing plates. 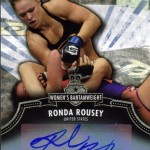 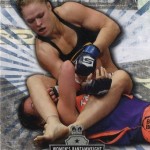 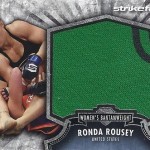 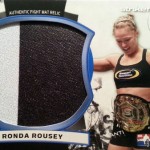 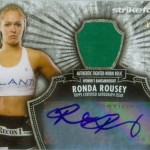