What do you get when you combine one of the most iconic baseball cards of the ’80s, one of the decade’s best signatures, a cross-country sports pilgrimage and a little creativity? For starters, one of the coolest autographs ever. The adventure and experience that go with it is even better.

Dale Murphy is a gracious autograph signer. Whether it’s at the ballpark or for card companies, he’s long had that reputation. Murphy’s signature also has some of the best penmanship in baseball.

Even when it’s written backwards on one of his most famous cards. 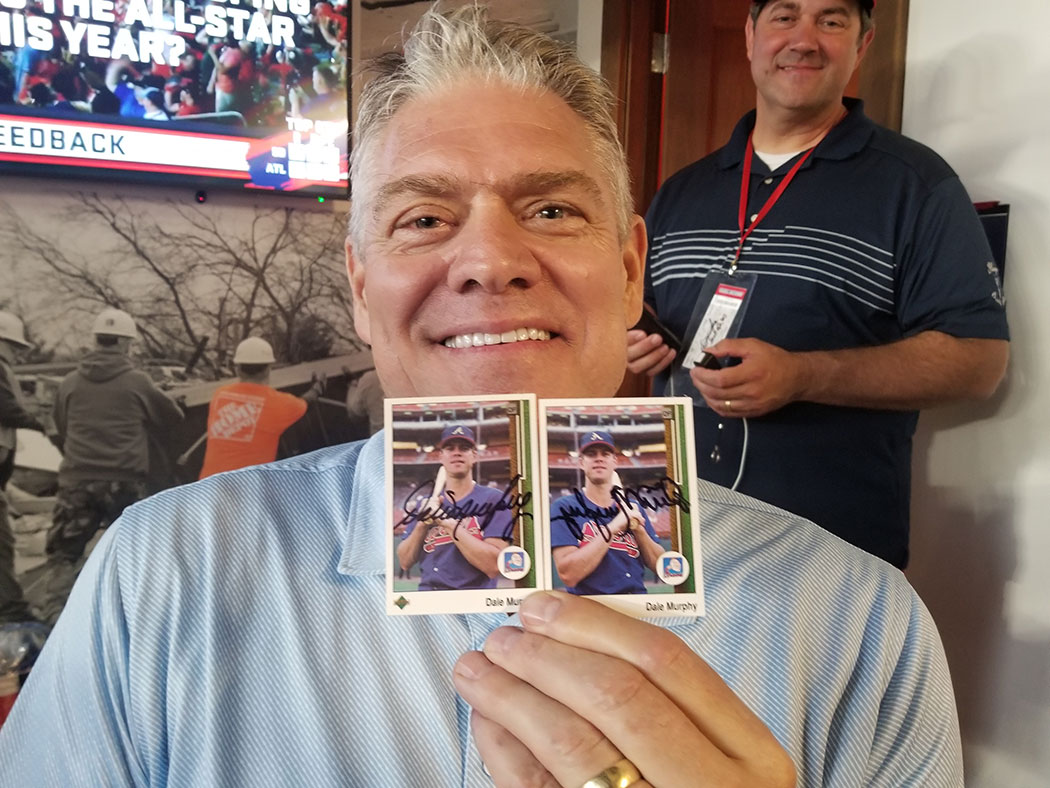 Daniel Jacob Horine has been a fan of Murphy since he was a kid growing up  in the ’80s and ’90s. Getting to see him play was always a challenge, though. That’s because Horine has always lived on the west coast.

He did get to catch his favorite player on occasion, but only when Murphy was in Los Angeles to play the Dodgers

But in June, Horine went to Murphy to participate in the Dale Murphy Experience, an intimate opportunity to hang out with the two-time MVP and seven-time All-Star. It’s an event that happens only a few times a year.

“It’s great because basically you get to go eat with him at his restaurant and he walks you through a tour of Sun Trust Park. Then you get to watch the game with him in a private clubhouse at the park,” said Horine, who made the journey to Atlanta on Father’s Day weekend. 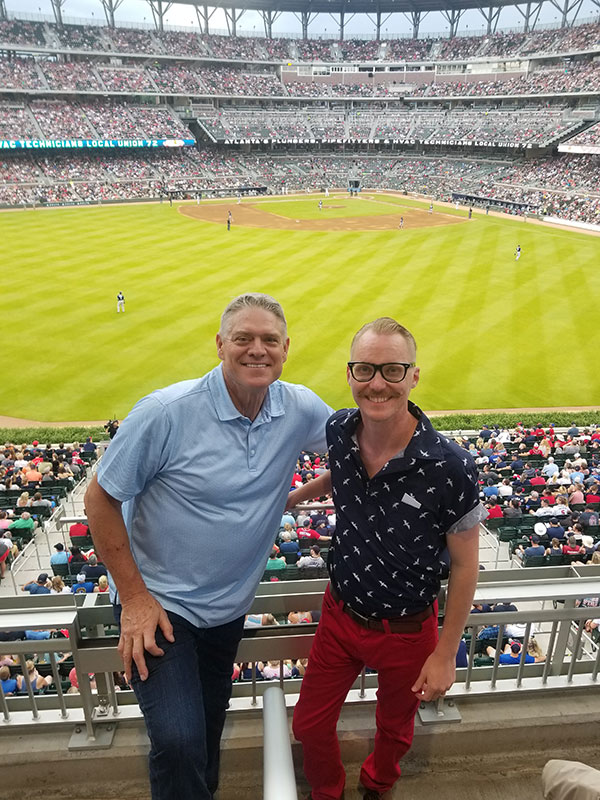 It also meant plenty of opportunities for chit chat, hanging out and, of course, autographs.

“I knew that I would have extended time with him, so I took my time in deciding what to bring,” recalled Horine. “I knew I wasn’t going to get rushed through a line somewhere like you normally would.”

The night before he left, Horine was going through his extensive Dale Murphy collection.

“I was thinking of what would be fun or unusual to get signed,” he said. “I thought what would be kind of funny to get a blank error card signed by him. With that in mind I started thinking about what other errors that he has.”

Which brought him to the most famous one of all — the 1989 Upper Deck Dale Murphy Reverse Negative.

The card has a flipped image making it look backwards. The mistake was caught early but some still got out. According to Upper Deck, two percent of Murphy’s cards have the error. It was 1989 so that still means a good number of them exist but still a lot less when compared to the corrected version and the Ken Griffey Jr. Rookie Card.

When it first came out, the error card was wildly popular. And while it might not command the same level of fervor today, it remains one of the most important cards in the landmark release. Raw copies still consistently sell for $25 or more. Gem Mint graded copies are in the $150 range.

Getting the card signed would be impressive. But Horine, who has more than 1,000 different Dale Murphy items in his collection, wanted to take it to another level.

He wanted the signature to match. That meant a reversed autograph on the reversed card.

When Horine presented Murphy with the card, the Braves legend was familiar with it. Getting him to understand the unique autograph request was a little harder.

“When I asked him to sign it backwards, it took a little explaining what I actually meant,” said Horine. “I think he thought ‘Murphy Dale’ or something like that. I had to say if you were to hold it up to a mirror.”

Writing something backwards is tough. Our brains aren’t really wired to work that way. Recognizing this, Horine came prepared.

He grabbed a digital image of Murphy’s signature and flipped it ahead of time. This gave Murphy a chance to practice before the final backwards autograph. Horine still has the paper with the early attempts. 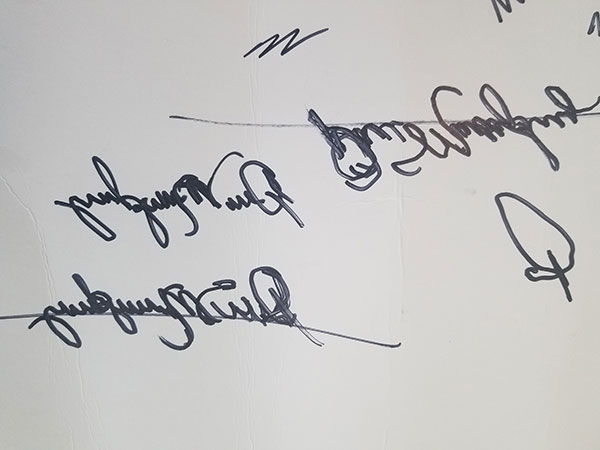 Despite the popularity of the card, Horine did say that the five-time Gold Glove winner mentioned it was the first time he’d been asked to sign it backwards.

“He seemed really tickled by the request and seemed to enjoy the challenge,” Horine said of Murphy’s response. “He wanted it to look right. He definitely took the time to make sure it was good.”

This wasn’t the only unique souvenir Horine, an animator and graphic designer, brought back to California.

About five years ago, he went to a signing that Murphy was at in Orange County. Horine came with an old Polaroid of him surrounded by his Dale Murphy collection from when he was a kid. 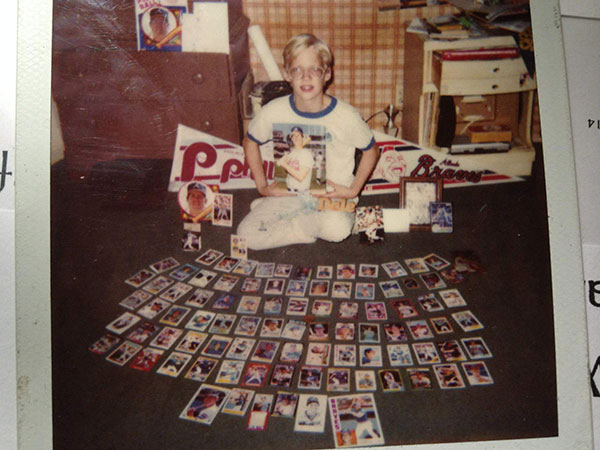 He convinced Murphy to take the picture holding the Polaroid with a puzzled look on his face while Horine was with him, excited to meet his hero. 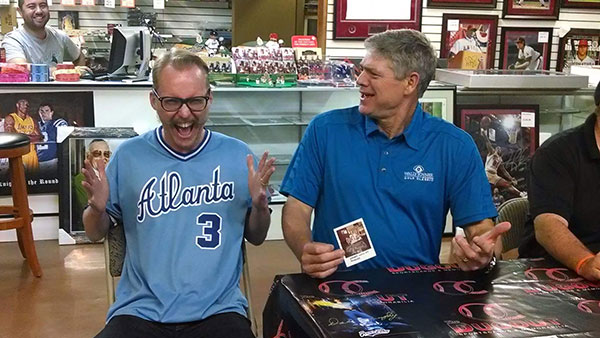 Skip ahead to his trip to Atlanta. This time Horine brought a print of the more recent photo.

“[Murphy] totally remembered it from five years before,” he recounted. So, of course, Horine went down the rabbit hole one more time. 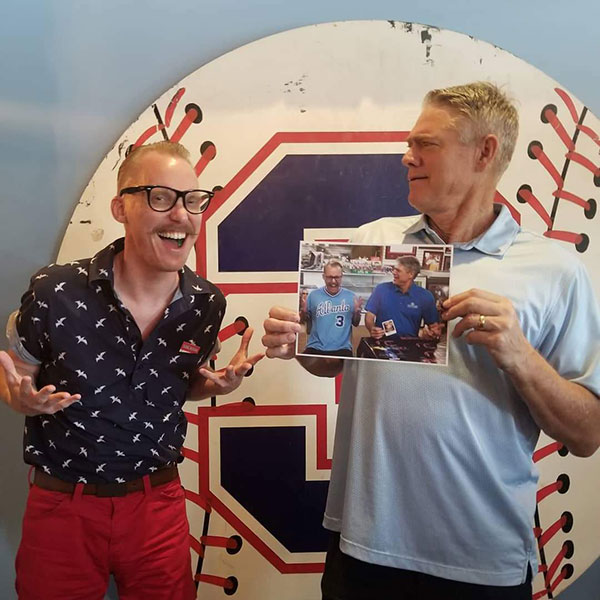 While this was an overwhelmingly positive experience for Horine, an early in-person encounterswith his baseball hero wasn’t all this way.

Horine got to see Murphy play in-person for the first time when the Braves came to Los Angeles around 1989 or so. Like a lot of kids heading to the ballpark, he got together all of his cards of his favorite player in hopes of an autograph.

“I had my stack of cards in my hand and I’m just out of my mind excited,” Horine recounted. “I get closer and closer to him and I’m next in line.”

And in that moment, fate took a horrible turn. Murphy let the crowd know he was out of time and that he had to go finish prepping for the game.

“He went in the dugout and I absolutely lost my mind,” Horine said. “I went back to my seat and I cried. I made my mom cry because I was crying. I was absolutely devastated.”

It turns out fate had something else in mind. It would just take some time to bring this chapter of Horine’s childhood full circle.

A few years later Murphy was back in Los Angeles, this time as a member of the Colorado Rockies. Horine arrived early to watch batting practice and managed to catch a pre-game foul ball.

After taking the ball back to his seats to show his parents, Horine saw Murphy was signing on the right side of the field — the opposite of where he was. History repeats itself as Horine grabs his ball and boots it across the stadium.

“I’m thinking I’m going to get disappointed again. I’m standing in the line and I get to him. He takes the ball, signs it and gives it back.”

Over the next couple of days, Horine checked the box scores to see how Murphy was doing. It was part of his routine in keeping up with his favorite player. But he noticed Murphy was nowhere to be seen.

Finally, after several days of no mentions or stats, he saw a headline announcing Dale Murphy’s retirement.

“Just by random cosmic chance I got to see Dale Murphy’s final game, see his final at bat, catch a ball and get it signed by him at his very last game,” Horine said. “I have that ball still. It’s probably my most prized possession.” 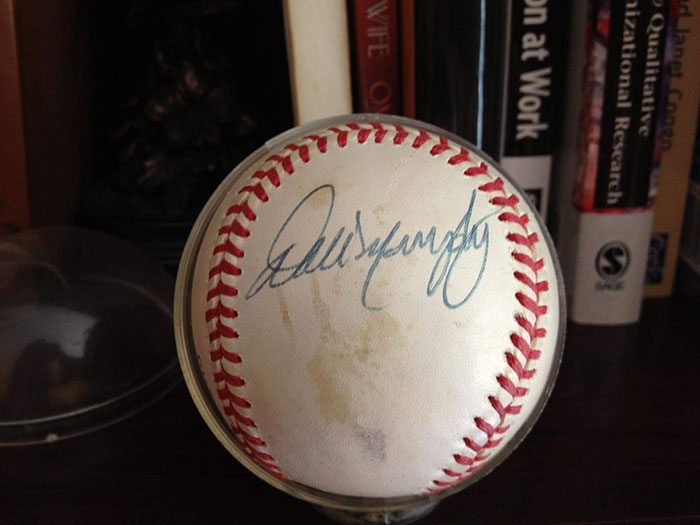 Today, Horine doesn’t collect like he did when he was a kid but he still chases Dale Murphy cards. He focuses primarily on stuff from his playing days. Horine highlights his collection on Instagram @westcoast_dale_murphy_fan.

“The new stuff is interesting but it’s frustrating because you can never complete it,” he explained. “I put parameters around my collection for the most part to his playing years just so I can have a chance to finish something.”

Horine doesn’t totally ignore newer stuff, but he limits himself to cards he finds interesting. He also mentioned that becoming a father changed his priorities somewhat as well.

Experiences are a key to his hobby now, which is what sent him to Atlanta and led to one of the most interesting — and coolest — Dale Murphy autographs of all-time.