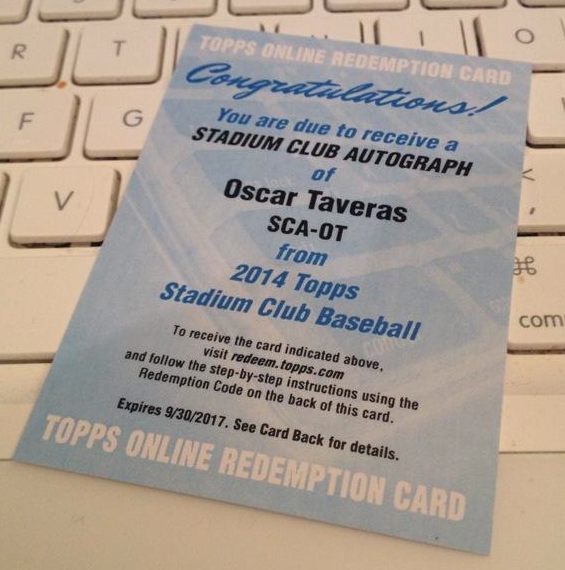 I’ve written it many times throughout my career writing about cardboard — every card has a story.

Whether it’s a regular card, an autograph, a game-used card or even a redemption, the face of a card — and who appears on it — can spark interest, emotion and response from collectors. Not all reactions are alike, either.

When I first heard the news of the untimely death of St. Louis Cardinals rookie Oscar Taveras on Sunday night, one of the first things that popped into my mind was a redemption card that I had left sitting — unscratched — on my desk at home. It was from a hobby box of 2014 Topps Stadium Club that I had purchased and filmed just 20 days ago. It was the rare instance where I had left a card sitting and hadn’t redeemed it, figuring I would get around to it when I wasn’t so busy with projects.

At the end of the video, after it turned out that my Taveras was probably the only real highlight from my box, I recapped it all with this thought.

“The Taveras, once I have it in hand, should be a decent little card,” I said in the video. “I don’t have his autograph, so that’s a win for me.”

Sunday night, though, the card just seemed a bit different — perhaps a bit more important to me for different reasons. It wasn’t about his promise on the field now and there were no added dollar signs in my mind. The card was my personal way that the Taveras news touched home because I had just pulled it for my collection. I had never really wanted to land a Taveras card — I certainly hadn’t stockpiled them like many prospectors have — but the card now just seemed different.

There wasn’t any real immediate need for me to scratch and redeem the card, but I went ahead and did so after I wrote my Taveras story, figuring I would either finally get his autograph — had he already signed the cards for Topps — or I’d get something else, a surprise of sorts, in return at some point. No worries, either way, I thought. I’d see what happens.

At this point, I tweeted the photo of the card you see above — the simple way that the Taveras story had touched my collection with no context and nothing said. I’d let it speak for itself. Naturally, there was more than one reaction as people read whatever they wanted into the image — some reactions were different than others and some attacked me. Some were Cardinals fans, some were not. That’s fine … moving on.

Naturally, today there was one question on the minds of a few collectors. What happens with those redemptions now? I asked representatives at the two baseball card-making companies who I know have redemption cards for Taveras outstanding — Topps and Panini America — if they knew what they were going to do in this instance.

This is not something card companies plan for — but it does happen. Real life happens. Both companies, I’m sure, will adjust their lineups for future products once they know what they have and what they do not. For now, there aren’t many details. Perhaps a commemorative card or two could be fitting later in the year or in 2015? We’ll see. They’re probably still trying to figure things out.

In the case of my card, I no longer have any questions about whether a career gone too soon will become part of my collection. As it turns out, Taveras had already signed his Stadium Club cards for Topps.

So, at some point in the future, the news of Sunday night will become a part of my collection — and it’s a card with a somber story to tell.