When you think of 1980s baseball cards, you don’t normally think of cards that are worth thousands, let alone tens of thousands. But the 1980 Topps Rickey Henderson rookie card isn’t just any 1980s baseball card. A PSA 10 copy of the card, an extremely tough grade for the set, is currently up for bid through SCP Auctions. 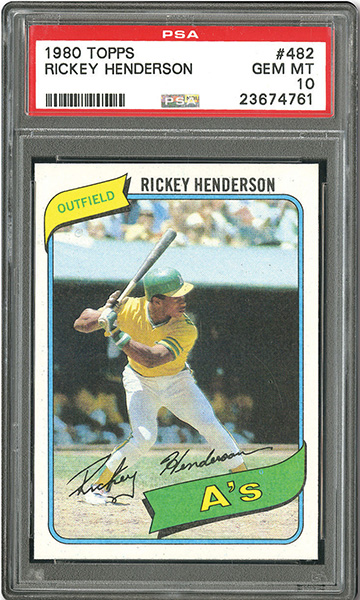 The Rickey Henderson is one of just 15 copies to receive the Gem Mint grade from PSA thus far. 1980 Topps Baseball is extremely tough to find in top grade, which is what makes this card so impressive. The price has definitely followed.

“The blue ink backs and the white gloss front almost highlight corner and edge wear. But even cards that have been locked away untouched in packs or boxes are victims of the factory,” says Beckett Senior Vintage Grader, Andy Broome. “Centering plagues this set when it comes to condition. Whether it is diamond cut cards or just-off side-to-side, finding a card with gem mint or better centering is extremely tough. It’s that perfect storm of condition that is required for a perfect card.” 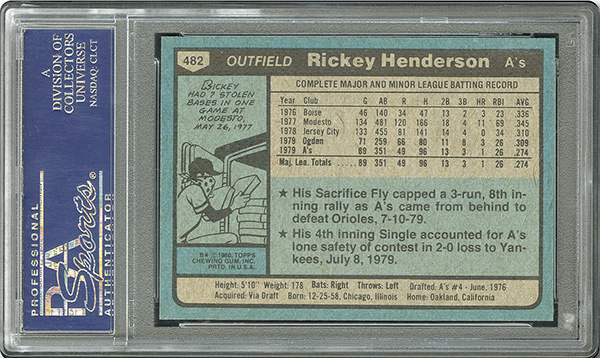 Of the more than 4,700 1980 Topps Rickey Henderson rookies submitted to BVG, eight have received a final grade of 9.5 while just one has a perfect 10.

While the price of this card isn’t nearly as high as the hundreds of thousands being paid for key vintage cards from the 1950s and ’60s right now, it’s still very important. The Henderson rookie card comes from a different era where more and more cards were kept as collectibles from the beginning.

It’s also one of the hallmark cards for the generation where the hobby hit its peak as far as reach. For these collectors, they have a direct connection with both the card and Henderson’s career as they likely grew up watching him.

Bidding on this card is scheduled to close on Saturday, April 23.