Upper Deck is readying what will be the most-limited – and most high-end – Michael Jordan card set ever made with the 2013 Upper Deck Michael Jordan UNC Master Collection, which will arrive this summer.

Each wood-boxed set will be limited to just 250 serial-numbered copies and include 23 standard cards. It also will include one hand-painted Masterpieces card – each limited to 30 – four signed cards and one complete patch set with the cards comprising either the standard or alternate Carolina logos. In addition, each box will include one Master Collection Shadowbox, Precious Metal Gem or a 1/1 autograph.

“Upper Deck produced Master Collection sets over 10 years ago and fans still inquire about them frequently,” said Grant Sandground, Upper Deck’s director of product development. “We felt Michael Jordan would be the perfect subject to re-imagine these ultra-premium sets around. It’s the type of set that 99 percent of collectors can’t afford, but 100 percent of collectors would love to own.”

As an added bonus, each set also will include a replica 1982 UNC National Champions ring.

A price for the sets was not announced. 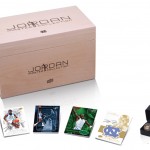 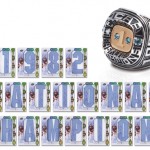