Plugged In: Chris Torres Has Lots to Say About Topps Project 2020

Chris Torres had some unexpected time on his hands. So he turned on his camera and began to talk.

Furloughed last spring due to COVID-19 fallout, Torres took to the cyber airwaves and created a YouTube show that, in short time, became a destination for all things Topps Project 2020.

“I sort of wanted to record myself during what I thought could be called an historic time period,” Torres, a native Texan now living in Seattle, says. “So I started this video series called Furloughed. Half of it was what I did that day, and half was sports cards. It was kind of like a vlog, which at the time I didn’t even know what a vlog was.”

But as Topps Project 2020 began to explode, so did Torres’ little YouTube show. Before long, the Furloughed name became the Project 2020 Show . . . with a lot more viewers. 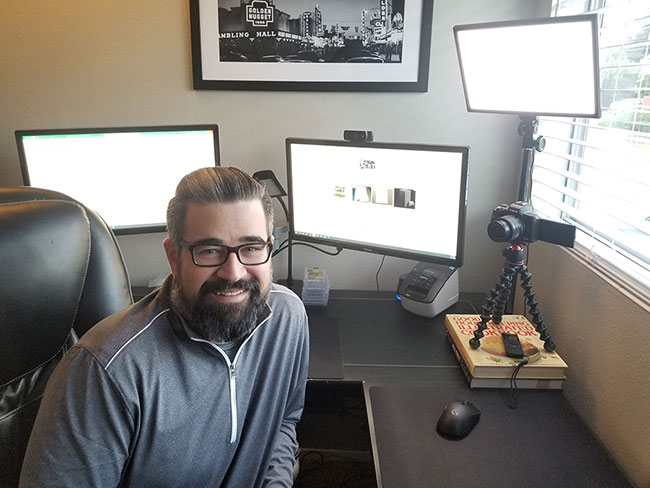 After two rounds of furloughs, Torres returned to his job as a general manager in the auto collision industry. But he’s still doing his show, although his 12-hour work days leave less time to talk about the project. Yet he still finds the time to produce the show, update his website (crtsportscards.com) and talk about the cards of the week.

We tapped into some of that time.

BECKETT BASEBALL: What drives your enthusiasm for this set?

CHRIS TORRES: “I’m a huge fan of the project. My point was never to have 1,000 people watching the show. I just wanted to talk about it. If you want to watch, great. And if you don’t, I understand. But I’m just a fan. I’m still amazed that to this day people watch religiously and go to the website. I just can’t be more appreciative. That was never the goal. The goal was to talk about a great project. The support and the community has just been fantastic. It’s almost sad, in a way, that this is going to end in six weeks.”

BB: What is this set’s legacy?

CT: “That’s tough to say right now because we’re still going through it. I don’t think we will really know what this set is until down the road. The reason I’m so interested in it is that it’s different every day. I’m kind of bored with modern cards. But these are different and I think it kind of gives you a different perspective of cards that we never thought of. But I don’t really know if that’s a legacy or not.”

BB: What’s a typical day for you between your job and your broadcasts and website?

CT: “I’m at work 6:30-6:45 in the morning, and get home around 6:30-6:45 at night, so it’s a 12-hour day every day. To record a nightly episode, I will typically start right around 7:15 after I get home and it’s up by 9 p.m. – so it’s about an hour and 45 minutes. It takes me about 45 minutes to an hour to record. I’m sorting of recording and editing at the time, and I’m going back and forth. Then the last 30 minutes I’m listening to it a couple of times just to make sure I’m not missing any small things. So it’s just under two hours every day to put out an episode.” 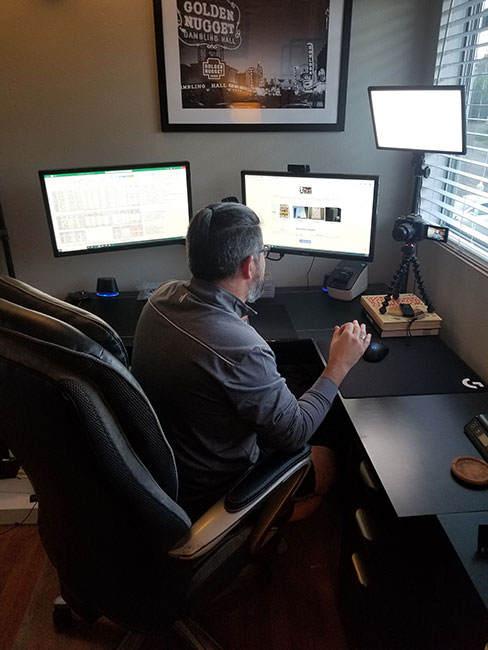 BB: When did you first get involved with Project 2020?

CT: “I started getting into it right around the end of April. I was just getting interested in it, so I did four to five back-to-back shows around Project 2020, but still under my Furloughed title series. All of a sudden my views went from under 100 on the Furloughed series to like 500 almost overnight. I thought I might have something, but I wasn’t sure what to do with it.

“I had started tracking the prices and looking at the cards, building kind of a library of sorts on the website. The website has always been there, but it had always been about odds of case breaks and things of that nature. I started getting about ten times the views on my site than I had been. Then my furlough was extended. The Furloughed series was only supposed to go seven weeks – that was my original furlough period. My first Project 2020 show was actually Episode 5. And then I started getting over a thousand views every day for a series that I was doing every single day. That’s where it really took off.”

BB: Do you remember the first card you bought?

CT: “My first purchase was #61-#62 the Mays Saladeen and the Ichiro Sophia Chang. 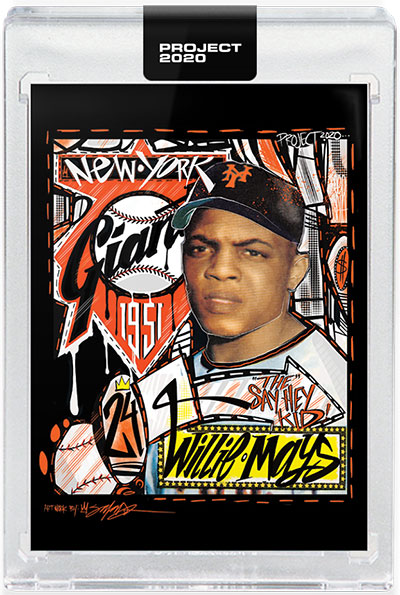 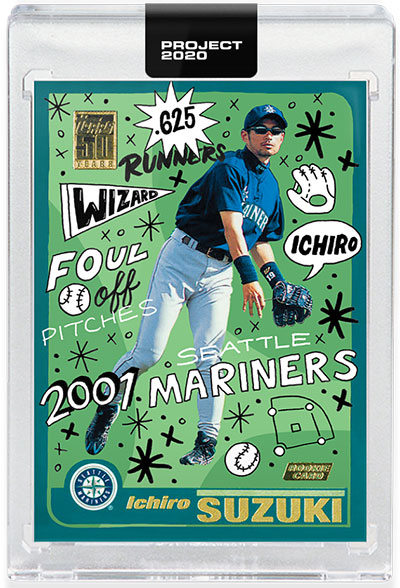 BB: What do you remember from the first few weeks of cards?

CT: “The first card I remember seeing was the Mike Trout Ermsy. But I don’t remember too many cards between Ermsy Trout and my first purchase of #61 and #62. I wasn’t a big on-demand consumer before then, so when these came out I thought it was probably just another Topps Living set or something like that. But then when we got into April, people in the Twitter universe and other people I know began talking about it more and more. Prices were kind of going up. And it was this thing where you could buy a card for $15-$20 and three days later it’s worth $40.

“Then I started researching it and just talking about it more. Then I made my first purchase – it was a Friday evening. Ever since then it’s been off to the races.” 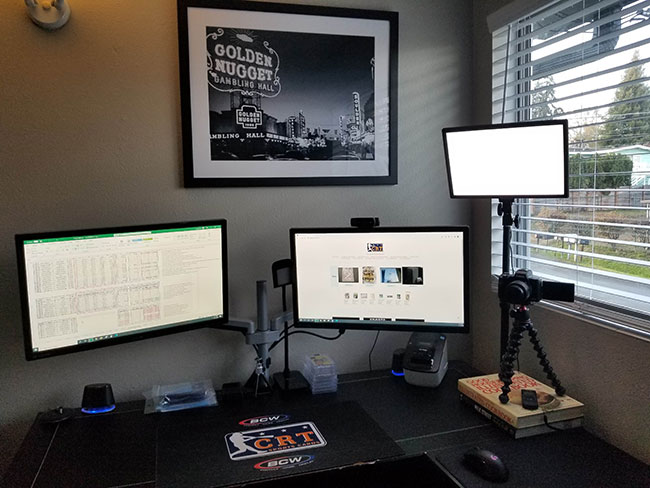 BB: Does this set have life in six months?

CT: “I think it will, but I do think it really depends on how Topps engages with these artists beyond this. If they just put these cards aside and ignore them, or if they never use these 20 artists again, there would be potential to die off. And then in four years an Ermsy Trout is $30 (laughs). A lot of us don’t really know how the art world works. If a Gregory Siff, or Blake Jamieson or Ermsy just become incredibly famous, what does that do to these cards? That’s always been the biggest question in my mind.”

BB: Do you have a favorite card from the first 335 so far?

CT: “I’d have to say the Naturel Jackie Robinson. That’s my favorite card. I think I could sell every card of every artist I collect, but that’s the card that would be the toughest to give up. I just like it. It’s simple, yet it’s also quite advanced. It’s a very striking version of the [original] card. That’s my No. 1 right now.” 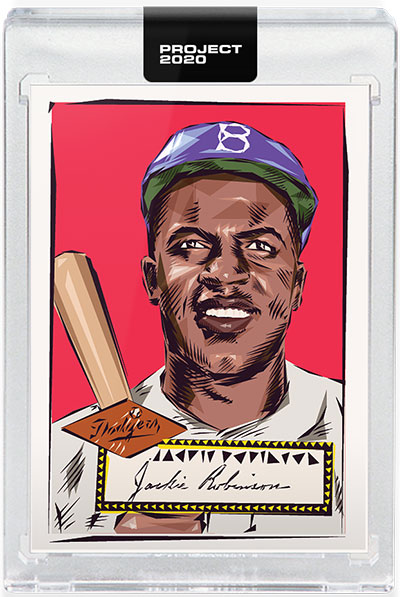 BB: What about artists?

CT: “I collect Grotesk, Naturel, JK5 and Gregory Siff. Siff is one of the artists that, at first, I was kind of like, ah, what is that? What are these cards? But now I think Gregory Siff is my top artist. I still go back to Grotesk, that was the artist I really, really liked the most. But when I see a Gregory Siff card I just think it’s amazing. And there are so many things on the card that you just miss it at first glance. Those are the four I collect, but now I’m also going back and adding Efdot cards.”

BB: Has the emphasis on print runs taken away from appreciating the art on the cards?

CT: “I think it has a little bit. Print runs have certainly shaped people’s opinions. I don’t think anyone, outside of maybe a few presellers, are buying 100 [card lots] anymore. The large lots that were happening when we thought 30,000 was a small number, or big number, I don’t think that’s happening anymore.”

BB: In your opinion, was the 99,177 print run for the Shore Griffey good or bad for the project?

BB: You haven’t shied away from commenting on some of the negatives experienced with Project 2020 – shipping delays, lack of communication from Topps, issues with presellers. Have you ever heard from Topps?

CT: “No, I’ve never spoken to Topps in a one-on-one conversation. I’ll tag them occasionally on some of my posts. But outside of maybe a random retweet or a like, I’ve never had any interaction with them.”

BB: But do they know what you are doing with the show?

CT: “Well, I hope so, but that’s a big if. Is their social media person just tagging everyone who tweets at them about Project 2020? To say they know about me and the show . . . I don’t know if they do or not. But I never went into this wanting Topps to recognize me. I just wanted to talk about Project 2020.”

BB: Have the goods of the Project 2020 experience outweighed the bads?

CT: “You could say yes, but I guess you could also say no as well. The challenge I’ve always had is Topps just hasn’t communicated about this set in a way they should have. Now, understand that in their meetings before they launched this they never could have forecasted selling 165,000 cards in a two-day period. They put up numbers that they never thought would happen. Their metrics probably showed them that, on a good day, they would probably do 2,000 of a card. But the moment this set exploded, I really think Topps should have communicated more. I don’t know if they could have added more staff internally or engage people on social media more, but the lack of communication hurt the set. I just think they could have been more aware of what questions were out there in the community.

“At the end of the day, I think all of that will be forgotten about because we are going to be left with a set that is second to none in the sports card world.”

BB: What do you see for the project as we approach the final 40 cards?

CT: “I think the people who are in it now are going to see it to the end. I don’t think we’ll see any new people come in. I think it’s just too late in the game. What we’re seeing right now is how we’re going to end this. I know Ben Baller is going to give away a chain with his Ken Griffey Jr. I think that’s his last card. It’s kind of like the last hurrah. I don’t know if that’s going to drive that big of a print run because we’re all smarter now. We all know what a large print run will do to a card. But where we are now is where we’re going to finish at card 400. Print runs under 2,000 – the bigger cards 4,000 or 5,000 – I don’t see how there could be a big change at this point.”

BB: Do you see print runs for any of the remaining cards dipping below 1,500?

CT: “I’ve been thinking more about your “legacy” question. Before Project 2020, I never would have gone out and bought a 1954 Topps Ted Williams, but I own one now. So maybe the legacy of this set is getting modern day collectors to appreciate cards – and players – that maybe they wouldn’t have in the past.”