Which Pitchers are Going to Break Out in 2018?

Pitchers are known for having breakout seasons each year in baseball. Last year, a few noteworthy players who broke out were Luis Severino and Robbie Ray. Both players were top amongst strikeouts and made a huge leap from their previous year.

A potential breakout pitcher is a player who hasn’t had a great season yet but has shown the potential to be great. Pitching is sometimes unpredictable in baseball you never know who is going to break out each year. I’ve provided a list of pitchers for people to watch for during the 2018 season and what cards to look for on these players. 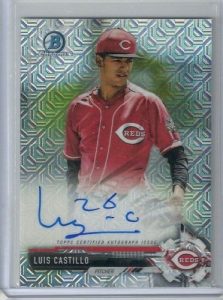 Castillo has shown all the signs of being a future ace with the Reds. His fastball last season topped out at 100 and averaged 97.5 MPH, which was amongst the fastest in the entire league. He started 15 games last season in the MLB and struck out 98 batters in 89 innings while also pitching to a 3.12 ERA and 1.07 WHIP. According to Castillo’s pitching ratios, all of the signs are there for him to break out in a big way this season. Castillo features a wipeout changeup and an improved slider mixed in with his great fastball. His most sought after card is his 2017 Bowman Chrome Mega Box Refractor Autograph which sells in the $25-35 range ungraded and $70 in a BGS 9.5/10 according to eBay auction. Castillo’s stuff could easily double after a few solid outings this season. 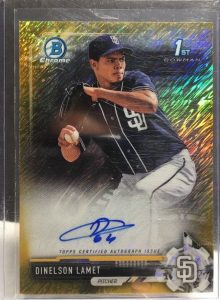 Lamet showed impressive strikeout ability last season when he struck out 139 batters in 114 innings. Although he finished his 2016 season with a 4.56 ERA, he should greatly improve on that statistic this season and here’s why…the second half of last season is where he began to figure it out. Lamet had a 3.80 ERA in the second half and the strikeout ability should continue to improve this season. I would expect him to be around 3.50-3.75 ERA this season. Pitching in the pitcher-friendly Petco park as his homefield should help his statistics as well. He is being coveted as one the best 2018 fantasy baseball pitching sleepers this year as well. Lamet’s most sought-after card is his 2017 Bowman Chrome Autograph, which is offered in various color print runs. His base auto ranges in the 2-5 range and his green version /99 sells in the $20 range, also gold wave auto /50 sold in the $50 range all at eBay auction. Lamet is a great buy-low investment and should improve greatly on last season. 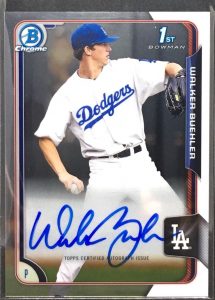 Buehler…Buehler…Buehler anyone…this pitching prospect is one of the best in baseball and could breakout this season if given the opportunity. He is projected to begin the 2018 year in Triple A with the Dodgers but could quickly make a huge impact if called up. Buehler struck out 125 batters in 88 innings while carrying a 3.3.5 ERA last season in three different minor league levels. Could this be the third year in a row that a Dodgers prospect wins the NL Rookie of the Year? He remains as one of the most sought-after pitching prospects that collectors have been buying since last season. His most sought after card is his 2015 Bowman Chrome Auto Draft which sells in the $40-50 range ungraded and in the $80 range in a BGS 9.5/10 at eBay auction. Buehler will remain as one of the most sought after prospects in the hobby this season. 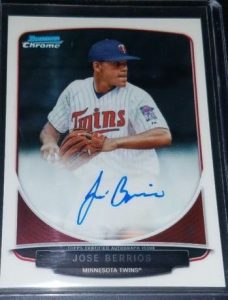 Berrios showed flashes last year of being a future ace with the Twins. He’s still only 23-years-old and has electric stuff featuring a 95 MPH fastball/sinker and a very good curveball with a lot of movement. He stuck out 139 batters in 145 innings and his strikeout rate should be around the same this season. Berrios has been one of the best pitching prospects in baseball and this year might be the year he puts it all together. His most sought-after card remains his 2013 Bowman Chrome Autograph which sells in the $20 range ungraded at eBay auction and $30-40 range in a BGS 9.5/10. Berrios is a great buy-low option before the season begins. 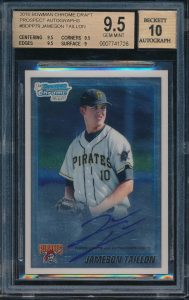 Taillon started the 2017 season hot, with a 3.31 ERA into mid-May, but then a shocking testicular cancer scare for about a month shortened his season. His ratios began to get worse, with his ERA increasing to 4.85 after retuning in mid –June. He would finish the season with 4.44 ERA and have 125 strikeouts in 133 innings. Taillon has the makeup to be a future ace with the Pirates and with a full season he could make that leap. His most sought-after card remains his 2010 Bowman Chrome Autograph which sells in the $10-15 range ungraded and $35 in a BGS 9.5/10. As with all of these guys, these prices could go up quickly if he fulfills his potential. 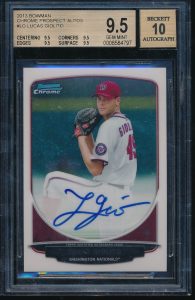 Giolito was a late call-up by the White Sox last season and performed really well down the stretch. His impressive 2.38 ERA in 45 innings, combined with 34 strike outs showed he’s got massive potential. His most sought after card remains his 2013 Bowman Chrome Autograph which sells for $20 ungraded and $40 in a BGS 9.5/10 at eBay auction. 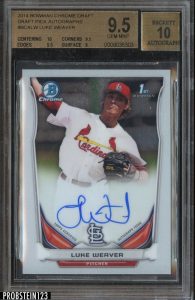 Weaver finished his 2017 season with a 3.87 ERA in just 60 innings pitched in the majors with the Cardinals. He struck out 72 batters in that time, he is primarily a fastball/changeup pitcher with a curveball in the works, too. He can build on last season and help fortify a solid Cardinals rotation. His most sought-after card remains his 2014 Bowman Chrome Auto which sells for $15 ungraded and $30 in a BGS 9.5/10 at eBay auction. Weaver could be a good sleeper pitcher this season that breaks out in a big way. 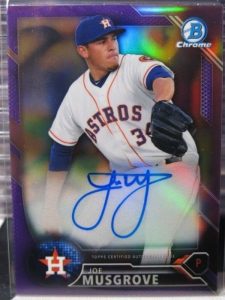 Musgrove was recently acquired by the Pirates in the Gerrit Cole trade. Last season he was good in his brief time with the Astros, featuring a powerful fastball. He’s a deep sleeper to be a breakout pitcher but has the upside and arm to be capable to do it. A change of scenery to the Pirates should help as well, because last season he was often a starter and a reliever and this season the Pirates will feature him as solely as a starter in the rotation. His most sought-after card remains his 2016 Bowman Chrome Autograp. Buy a color auto of Musgrove if you’re a believer, a purple refractor /250 sells for $5-10 of Musgrove at eBay auction. He could surprise this season with the Pirates and exceed expectations. 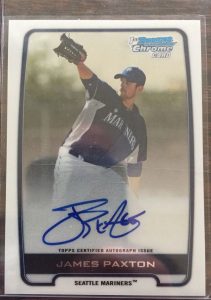 Paxton pitched like an ace for the Mariners last season finishing with a 2.97 ERA in 24 starts. The biggest question with Paxton has always been whether he can stay healthy. Maybe this will finally be the year he puts together a full healthy season. Paxton struck out 156 batters in 136 innings last season and I would expect similar results this season as well. Paxton was a hot commodity early last season in the Hobby and that trend could continue this season after a he has a few good outings. His most sought-after card remains his 2012 Bowman Chrome Autograph which sells in the $10-20 range at eBay auction. 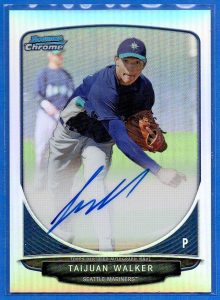 Walker had a solid season last year with a 3.48 ERA in 28 starts, he struck out 146 batters in 157 innings. He has shown signs of being dominant and still only 25-years-old. Walker can build on last season and try to keep improving as a starter, he features a powerful fastball and has very good pitching ratios. Look for Walker to try to stay healthy this year and reach the 200-inning mark. His most sought-after card remains his 2013 Bowman Chrome Autograph which sells in the $5-10 range ungraded, even his refractor is cheap and similar in cost. Walker is a great buy-low candidate with plenty of room to increase if he’s able to breakout with the D-Backs.

What pitcher is on your breakout list this season?