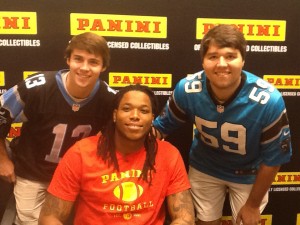 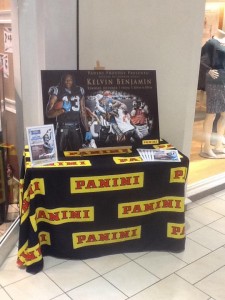 Carolina Panthers rookie wide receiver Kelvin Benjamin was the first NFL player to participate in the hobby shop signing appearance in the 2014 Panini Player of the Day promotion. Benjamin signed autographs for fans and collectors yesterday at Cardiac Sports Cards in Cary, N.C. Part of the promotion is players appearing at hobby shops for a meet-and-greet and autograph session.

Benjamin is having a great rookie season, which makes it even sweeter. After five games he was leading all rookies in receiving yards and was averaging more than 15 yards per catch. Follow the Panini Player of the Day promotion, including program updates and pictures of winners on Twitter @PaniniPOD and @BeckettMedia. 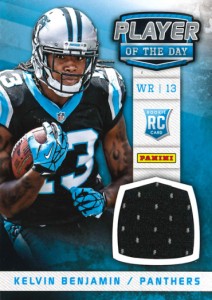