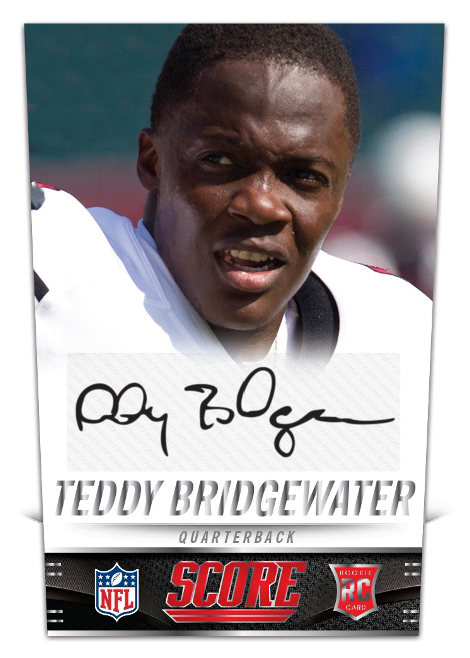 Panini America is banking on Bridgewater this season.

The Texas-based NFL card-maker announced Wednesday that former Louisville quarterback and likely top draft pick Teddy Bridgewater has signed a card and autographed deal with the company. He’ll also appear on packaging and work with the company’ marketing and social media projects.

“Fans and collectors are eagerly anticipating the 2014 NFL Draft class and Teddy Bridgewater is a big reason why,” said Panini America CEO Mark Warsop in a prepared release. “Rookie Cards drive the trading card industry every year and, as a result, 2014 is shaping up to be a spectacular season for sales of Panini America NFL trading cards. We’re excited about our relationship with Teddy and what that partnership will mean for our business.”

His first cards will arrive with 2014 Score coming in June.

“As a kid growing up, having your own NFL Rookie Card is always something you dream about,” said Bridgewater, who threw for more than 9,800 yards and 72 touchdowns in three seasons for the Cardinals. “Now, thanks to my relationship with Panini America, that dream is about to come true. I can’t wait to see them and have kids collect my cards.”

Orioles Collector from Maine is Set to ...