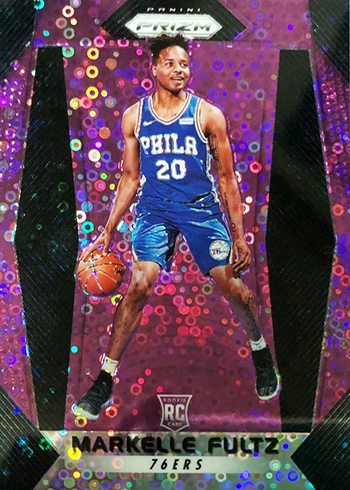 Prizm basketball rookie cards are quickly becoming some of the most sought out rookies in the entire card industry. Before Prizm rookies many star players like LeBron James, Kobe Bryant, Tim Duncan, Kevin Durant, and Steph Curry’s best cards were their Topps Chrome rookie cards. But since 2012, Prizm has been the top RC to get each year.

Chrome is the “king” to many collectors, meaning some of the most well-known rookie cards are Topps Chrome, including LeBron James’s rookie card from 2003-04, which is one of the most collectible cards in The Hobby. During 2009-10 Topps wasn’t going to renew their license the following year, causing many of their cards that season to be limited in quantity. That year Topps Chrome featured two of the best current players in the NBA with Steph Curry and James Harden, both of whose Topps Chrome rookie are numbered to just 999, refractors 500 and gold version just 50!

For a number of years many collectors speculated if basketball would ever feature cards similar to Topps Chrome rookie cards. In 2012 Panini released their first Prizm rookie cards which look very similar to Topps Chrome and feature the same shiny chrome material. Prizm basketball rookie cards have exploded in all years since 2012, especially refractor rookies which are extremely rare because they’re very limited and no exact print run is known. This season a number of players with Prizm rookies have emerged as the most trending and popular amongst collectors. 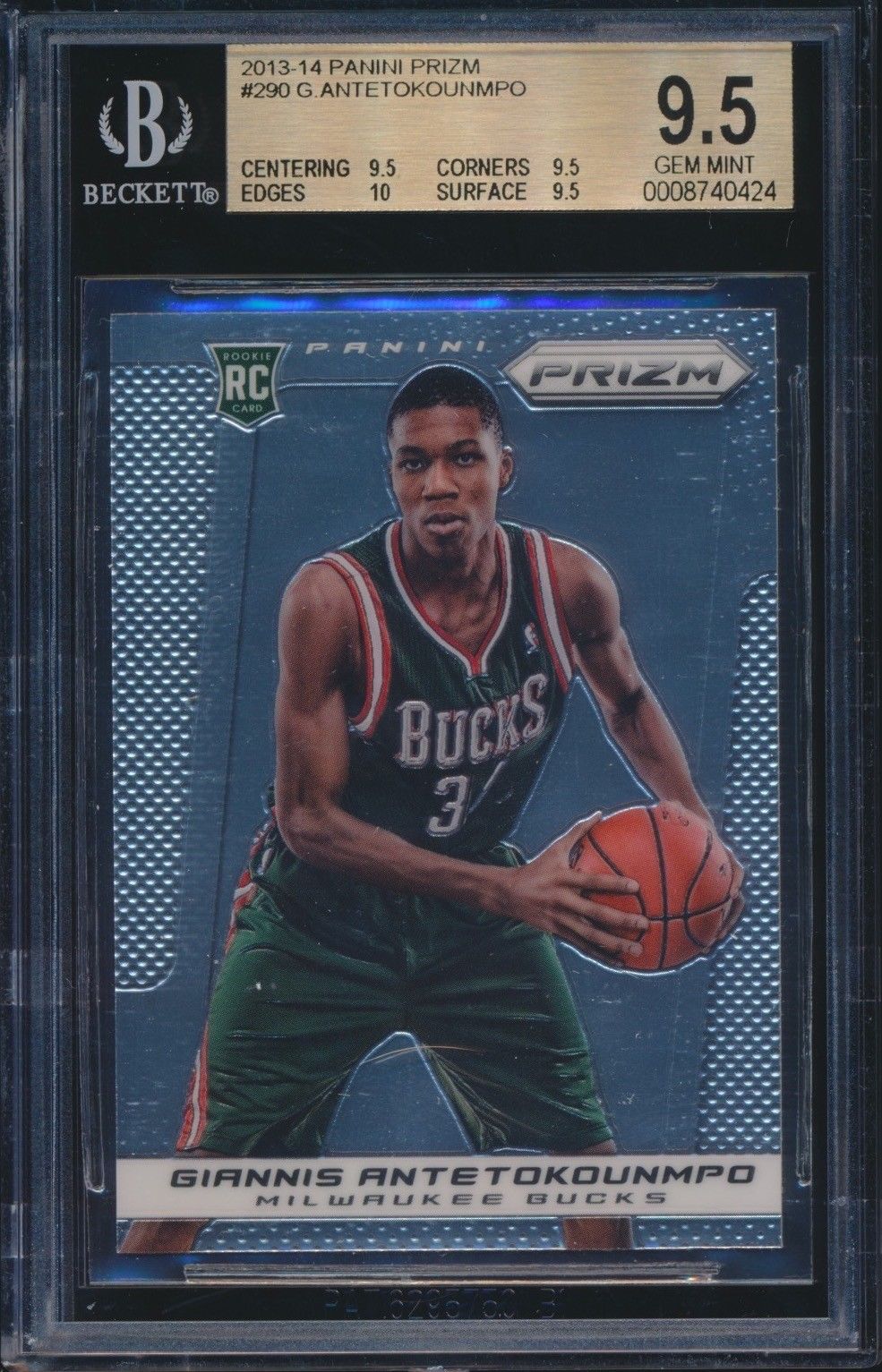 The Greek Freak is an early MVP candidate this season averaging nearly 30 points a game and having his best season of his career. Antetokounmpo’s Prizm rookie has reached its highest value ever with ungraded versions selling for $75-100 at eBay auction this month. Silver refractor versions have reached as high as $1,725 in a BGS 9.5! 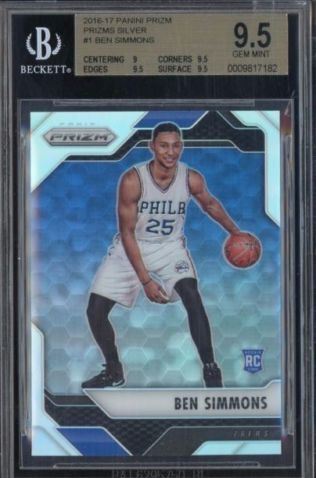 During his first NBA season Simmons has already accomplished some historic feats, including averaging nearly a triple double on a nightly basis. He’s averaging 17.5 points, 9 rebounds and nearly 8 assists. He has become one of the early Rookie of the Year favorites and features tremendous court vision for his size. His Prizm rookie from last season has sold at eBay auction for as high as $80 this season ungraded while BGS 9.5 versions have sold for as high as $175. Silver refractor versions of Simmons in a BGS 9.5 have sold for as high $1,426. 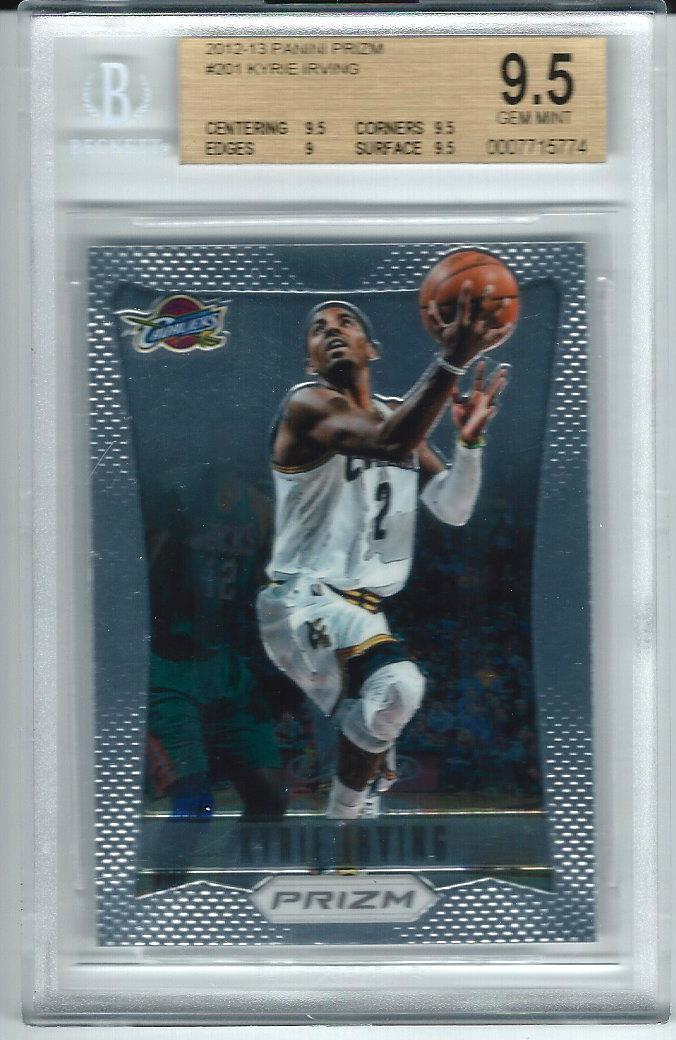 Irving has quickly become the man on the Celtics averaging 24 points per game. He has tremendous ball handling skills and is one of the best scoring point guards in the NBA. The Celtics are one of the best teams this season led by Irving. Uncle Drew’s Prizm Rookie Card is featured from the very first year of Prizm cards in 2012-13. His base version Prizm rookie sells for $30 ungraded and $60 in a BGS 9.5. The silver refractor version sells for $1,000 in a BGS 9.5. 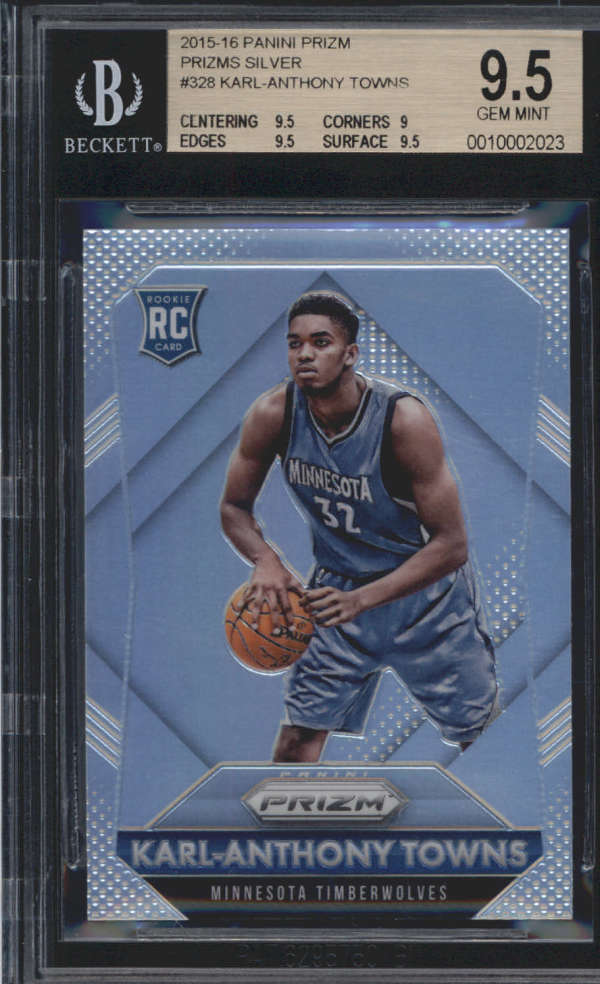 Towns has become one of the best overall big men in the league and is just 22 years of age. He’s averaging over 20 points-per-game and nearly 12 rebounds. He’s the type of big man that can do everything and has incredible skills and versatility. One of the most popular young players in the NBA, he has many collectors investing heavily in his Prizm rookies. Towns’s Prizm rookie sells for $10 ungraded and $25-50 graded a BGS 9.5 His silver refractor version sells for $265 ungraded and up to $650. 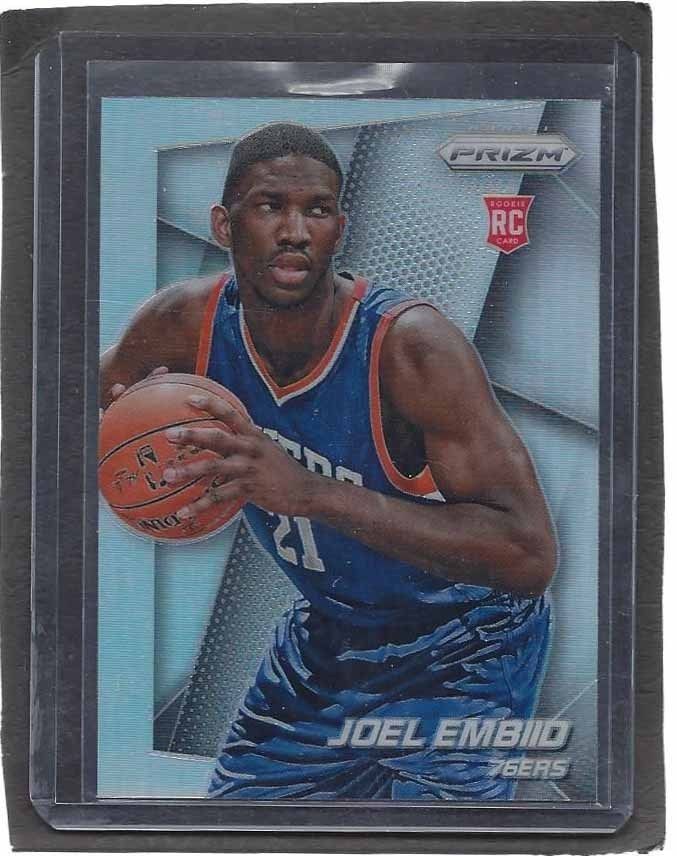 Embiid has quickly emerged as one of the most talented players in the entire NBA. He’s averaging nearly 24 PPG this season along with 11 rebounds. This young and exciting big man has a scary amount of talent which is causing collectors to invest heavily in him. Embiid has become one of the more popular players this season and his cards show it. His Base Prizm rookies have nearly tripled in value since the start of the season. They sell for as high $40 ungraded and $75-100 graded a 9.5 at eBay auction. Silver refractor versions are even more sought out and have sold for as high as $320 ungraded. 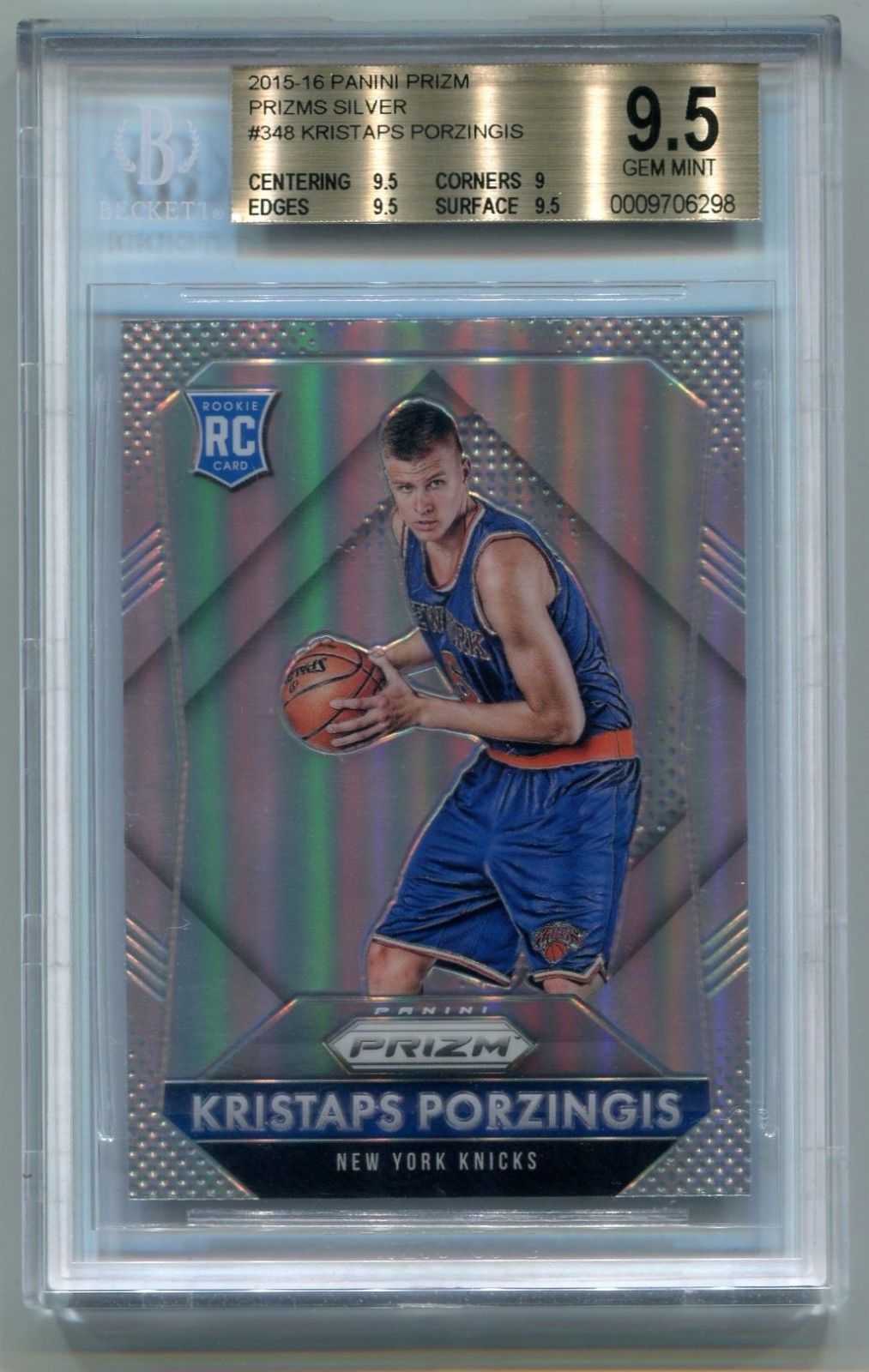 Porzingis is having his best season of his career averaging 26 PPG and has become the face of the franchise for the New York Knicks. His base Prizm rookie sells for $15 and $40 in a BGS 9.5, Silver refractor versions with that same grade have sold in the $400-650 range this season. 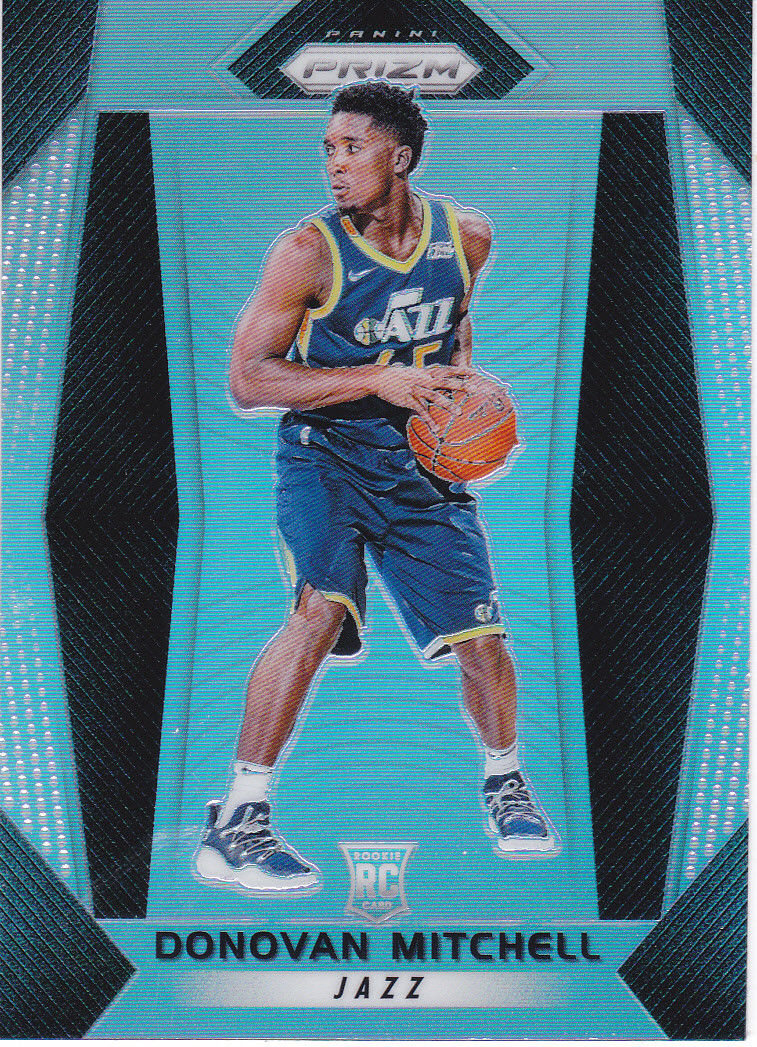 Mitchell is one of the biggest surprises this NBA season averaging over 17 PPG in his rookie season with the Utah Jazz. He’s featured in the brand new 2017 Prizm product that released early in December. He’s already had a 41 point game this season and is one of the most exciting rookies in the league. His base Prizm rookie sells for $10 and silver refractor versions sell for $250. 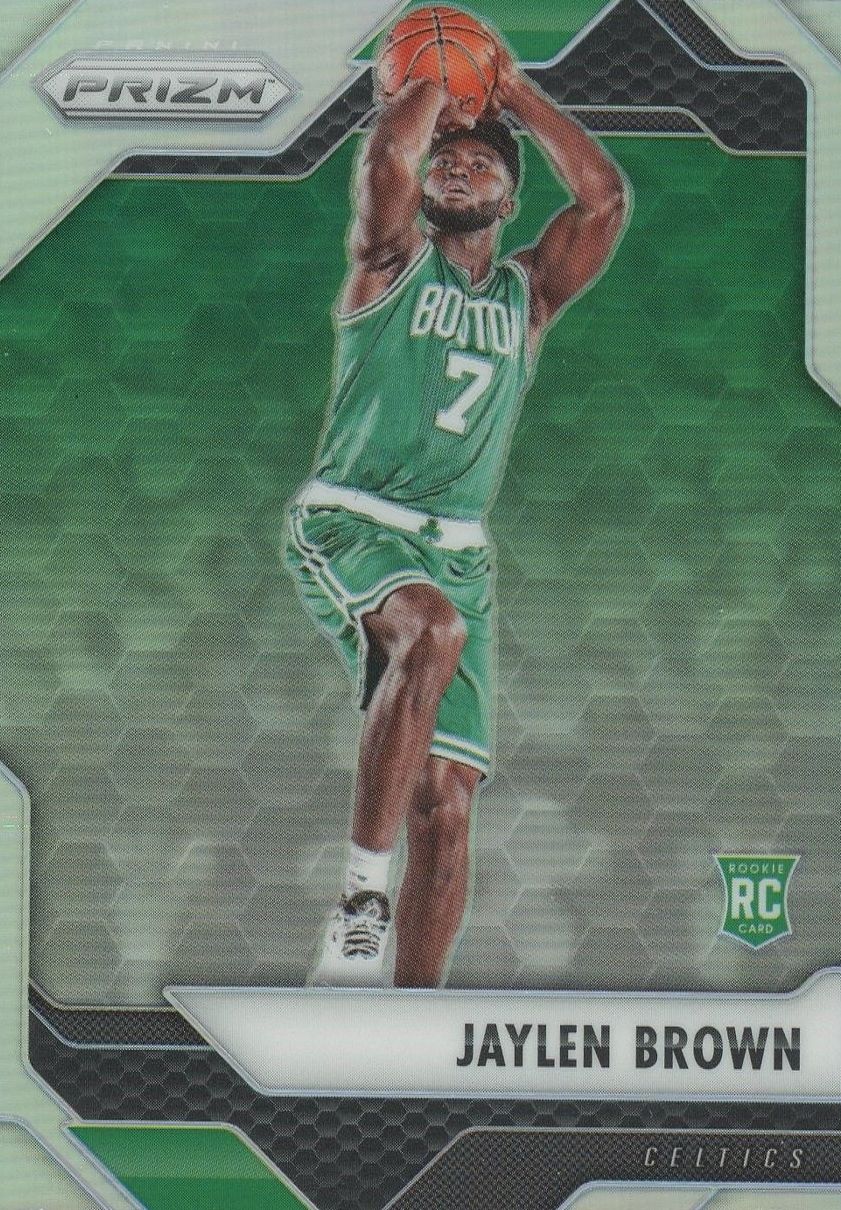 Jaylen Brown, in just his second year with the Boston Celtics, has had an immediate impact with the team. He’s averaging over 14 PPG and is one of the most improved overall players in the league from a year ago. This 21-year-old has become one of the most trending players with an uptick in value this season. His Prizm base rookie sells for $10 and his silver refractor version sells for over $200. 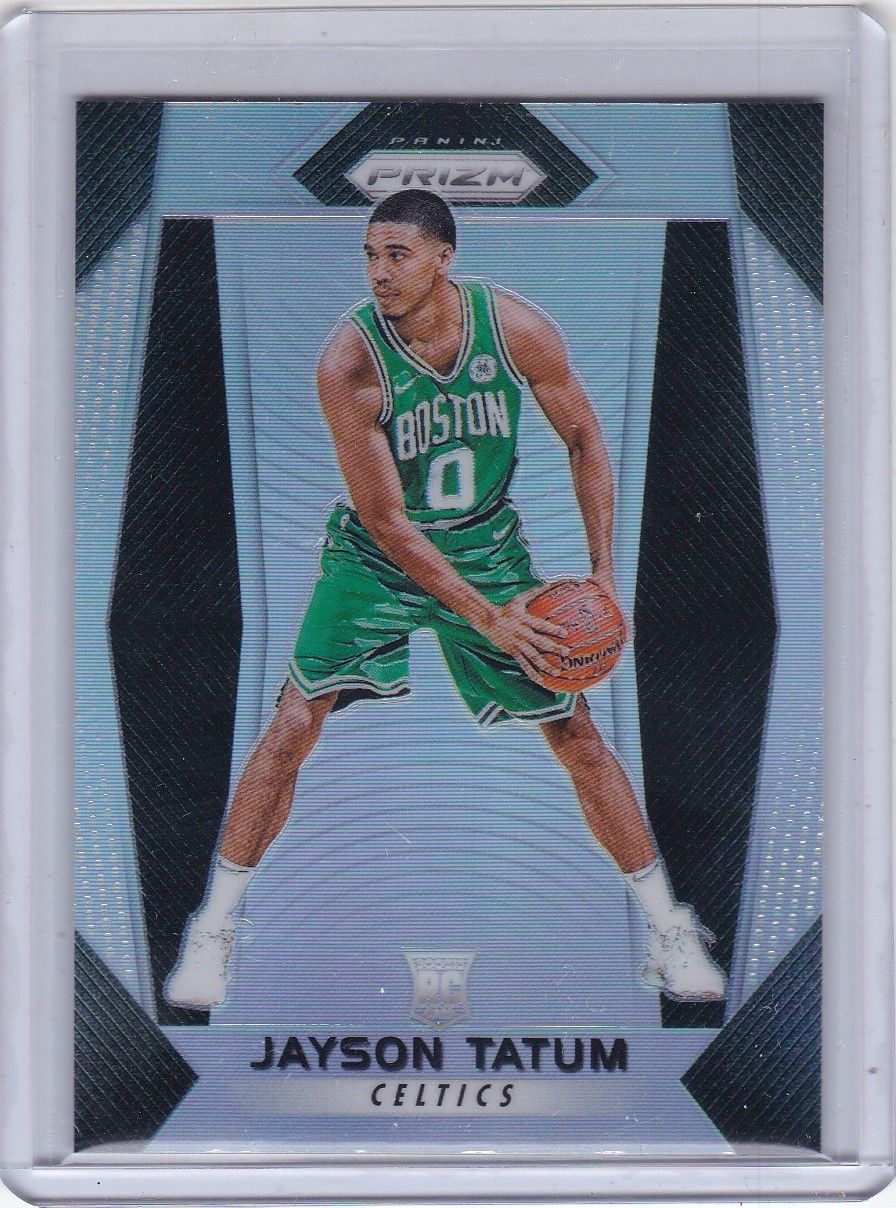 Tatum was the #3 overall pick of the 2017 NBA has fit in nicely with the Celtics. Scoring nearly 14 PPG, he is one of the best young rookies in the NBA this season. Tatum has a well-rounded game and is shooting a very high percentage from the three-point line. Collectors have already begun investing in this bright young star. His base Prizm rookie from 2017 Prizm sells for $10 and his silver refractor version sells for $375. 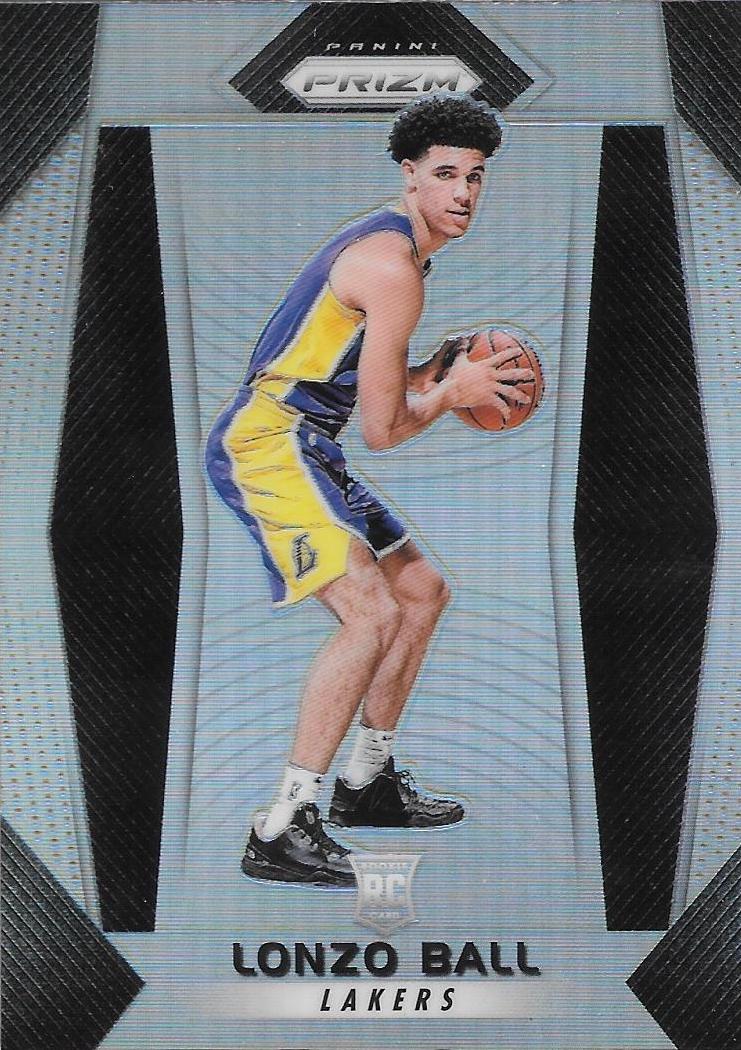 Ball was arguably the most hyped prospect from this year’s rookie class. He’s averaging just under 9 points per game and nearly 7 assists and 7 rebounds. He has shown flashes of being a great player this season showing off incredible passing ability and great rebounding for being a guard. His inconsistent shooting has some collectors still wondering if he’s the real deal or not. His base 2017 Prizm rookie ranges from $5-10 ungraded and silver refractor version sells for $175 at eBay auction.