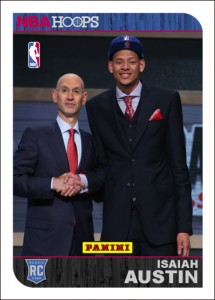 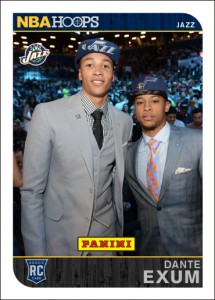 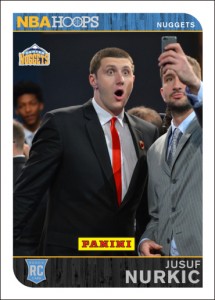 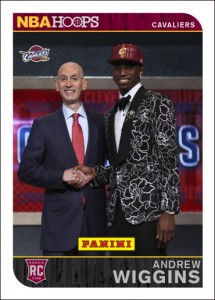 The first cards of next season’s freshman class will hit store shelves with the release of 2014-15 NBA Hoops in October and one of the product’s designs was previewed in virtual trading cards revealed recently over the course of the 2014 NBA Draft via their Twitter feed.

Panini America’s Hobby Marketing Manager, Tracy Hackler, recently spoke with Beckett Basketball regarding what spurred the company to undertake a project which required their design and marketing teams to produce something so quickly.

“We’ve done it in football during the past three seasons,” he said. “There’s a lot of hardcore fans engaged in the NBA Draft. It’s as exciting to us as it is for people to see them. It’s an authentic tie-in to what we do. Many of them will not even be printed cards, but it’s nice to get Panini out there in an authentic way.”

Collectors expecting to find these exact cards in packs may be surprised by the final result – especially with the NBA Rookie Photo Shoot coming up in August.

“Any card we plan on printing physically would need to be approved by the NBA,” Hackler explained. “I think the idea behind these was never to be authentic cards. It was a way for us to get in on the excitement of the NBA Draft. It’s akin to how newspapers or websites would cover it, just with our spin. If we can fuel this excitement and show collectors an almost instant look at what a rookie card might look like, that’s a win-win.”

The end result of this effort proved to be a positive one and generated reactions from both fans and players alike.

“People really seemed to like them,” said Hackler. “There were some unique shots that wouldn’t work in a traditional set like selfies and players hugging family members. I thought the one of Dante Exum with Trey Burke was really interesting since they are going to be teammates. It’s a cool photo that you wouldn’t necessarily associate with a draft night. There was a lot of engagement on social media and retweets from the players themselves.”

One of the virtual cards the company revealed at the time was of Isaiah Austin, who was made an honorary pick by the league. Sadly, he was diagnosed with Marfan syndrome just days before the draft and was forced to retire due to the genetic disorder. In a touching moment, NBA Commissioner Adam Silver called out his name and thanked him for his hard work and dedication.