With the NBA playoffs well underway, Panini America is letting collectors know the NBA isn’t over once the summer hits.

NBA Season Update is back this July with more than 1,000 on-card autographs, autograph rookies and memorabilia cards.

At $2.99 a pack, this product is affordable for all collectors. At that price range, fans still have a chance to pull some great cards including a Kevin Durant autograph.

See a gallery after the jump.

“Last year’s NBA Season Update was a solid building block that we would like to expand upon this season,” said Aik Tongtharadol, NBA Brand Manager for Panini America. ”The Rookie Challenge, Rookie Duals/Triples and updated Prestige and Rookies & Stars cards will return.

“Lakers Legacy and Christmas Cards will be swapped out this year with the Throwback Threads, All Stars and Green Week inserts taking their place. The latter two will feature materials that can be linked back to specific games — 2010 and 2011 All-Star Games and 2009-11 Green Weeks, respectively.”

“I’m always excited to give deserving players their due,” Tongtharadol said. ”Unfortunately, we can’t invite every rookie to the NBA Photo Shoot, but this set lets us feature some of the players that have emerged during the season, such as a Gary Neal or Landry Fields on an updated Prestige RC or Rookies and Stars Signed Patch RC, respectively.” 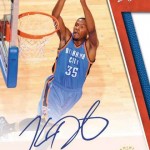 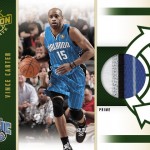 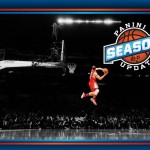 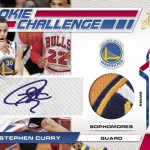 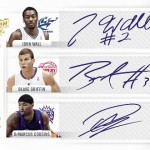