Dirk Nowitzki is an in-demand man these days — both off the court and on memorabilia.

Panini America knows that — after all, he is their hometown superstar — but all that demand for his time didn’t stop the world champion Dallas Mavericks forward and NBA Finals MVP from signing items for its recently launched Panini Authentic memorabilia line.

And that’s quite an accomplishment since, after all, he’s not a frequent signer, having inked just 112 different certified autograph cards for trading card manufacturers through his entire career.

“Adding Dirk Nowitzki to the superstar-laden roster of talent signing for Panini Authentic is a huge coup for us as it gives us the unparalleled ability to line Dirk up alongside Kobe Bryant and deliver exclusive memorabilia signed by the last two NBA Finals MVPs,” said Brian Bayne, Panini America’s Memorabilia Business Manager. “Hardcore hoops collectors recognize Dirk as a rare signer. We’re thrilled to have him.”

But what will collectors have a chance to have first?

The other three photos include “The Dagger as well as “The Moment” and an overhead dunk shot titled “Authority.”

The rest of the NBA signers who are part of the Panini Authentic lineup are the company’s exclusive spokesmen — Kobe Bryant, Blake Griffin, Kevin Durant and John Wall with autographed photos, shoes, basketballs, jerseys and game-used memorabilia among the present offerings.

Click on the image for a full view of the item. 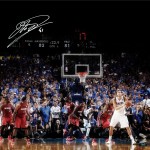 How a Punch line became an NHL ...