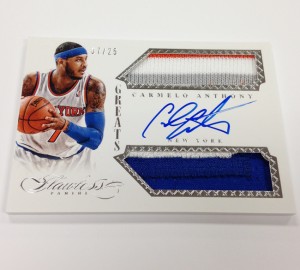 Trading card companies are always looking for a way to out-do themselves with each passing release and one tried-and-true method to capture the interest of hardcore collectors is to obtain autographs from the toughest of signers.

Panini America has definitely raised some eyebrows with some of their most recent signees as many of them have not had cards bearing their autograph appear in products for several years. The company recently announced that current stars Carmelo Anthony, Dwyane Wade and Manu Ginobili will all have hard-signed cards in late season releases such as 2013-14 Immaculate, 2013-14 National Treasures and 2013-14 Flawless. Wade and Ginobili are actually signing physical cards for the first time with the company and Anthony will be doing so for the first time since the 2010-11 season. 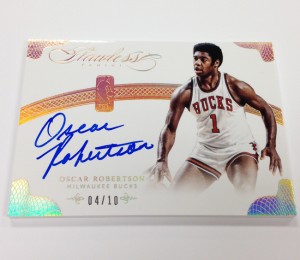 Three of the game’s greatest legends also agreed to deals with Panini and Allen Iverson will be found in all three releases. Chris Webber and Oscar Robertson will only appear in packs of Flawless this season. While Robertson did have some signatures in last year’s products, fans have waited a long time for certified autographs of Webber, which have not been available in packs since the 1999-00 campaign.