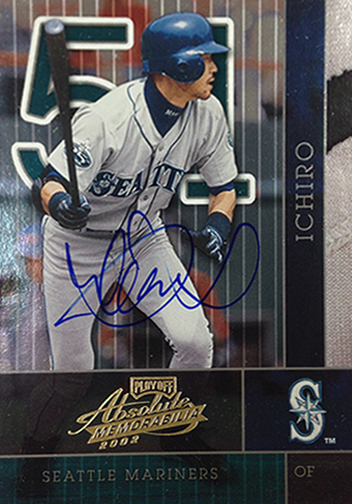 First it was Derek Jeter. Then it was Barry Bonds.

Now it’s Ichiro Suzuki‘s autograph that is back in packs.

Panini America officially detailed its plans for buyback autographs of the Japanese baseball legend on Thursday — his autographs are the first he’s ever signed for the company.

Like Jeter, the cards signed are buyback cards from the Donruss/Playoff portfolio of past releases that Panini America owns the rights to. The first buybacks for the Japanese star can be found in 2014 Classics — a selection of cards from 2002 to 2005.

The company said it will be including more autographs of the free agent, who last played for the New York Yankees after several successful years in Seattle, in upcoming products.

Suzuki appears on 9,893 cards in the Beckett database valued at more than $219,000 excluding rarities. Of those, only 324 are certified autographs.

How much did this Willie Mays rookie ...