This time around, we focus on the famed “Rated Rookie” subset and its humble beginnings.

Recent NBA and NFL products have brought the Rated Rookie logo back into the spotlight, but its origins can be traced back to Junk Wax Era baseball.

The concept was first introduced in the 1984 Donruss set, with Bill Madden of the New York Daily News tasked with selecting 20 promising rookies for the upcoming season. Those players were indicated with a ribbon of text above their name. The following year, the now legendary blue logo was used for the first time, and that’s where we’ll begin this week’s collection.

From the 1985 release through the 1993 release, the blue Rated Rookie logo was a prominent part of each Donruss set. In honor of that, we’ve selected one Rated Rookie from each of those nine sets to show the progression of the subset leading up to the team’s pivot to premium in 1994.

As the No. 1 overall pick in the 1982 draft, there was plenty of hype surrounding Shawon Dunston when he first popped up in 1985 products. He never quite developed into a star, but he did make two All-Star teams over the course of a productive 18-year career. 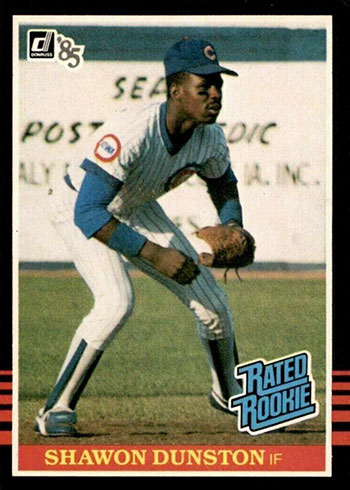 One of the defining cards of the Junk Wax Era, the 1986 Donruss Jose Canseco card still carries value today. His only other rookie card came in the 1986 Fleer set and he shared it with Eric Plunk, which helps explain the card’s popularity.

The 1986 Donruss set also has one of two Fred McGriff Rookie Cards. The other? 1986 Leaf (aka Canadian Donruss), which is pretty much exactly the same in appearance. 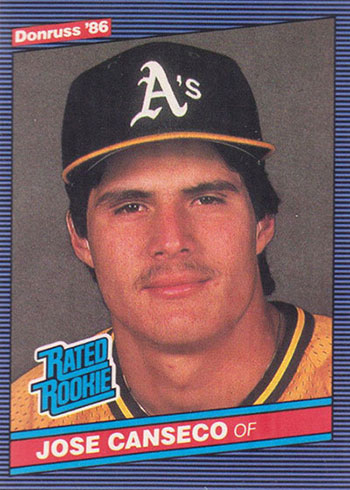 The Greg Maddux rookie may be the most valuable among the 1987 Rated Rookie class, but there is little question Bo Jackson is the most recognizable card in the set.

A fourth-round pick in the 1986 draft, Jackson made his MLB debut the same year and he broke camp as the starting left fielder to begin the 1987 season. 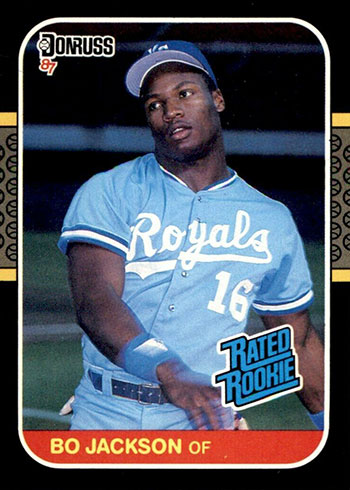 The 1988 Donruss set is peak Junk Wax and holds little value today, but there are a handful of notable rookies in the set, including Hall of Famer Roberto Alomar and longtime Chicago Cubs first baseman Mark Grace among the Rated Rookie selections.

Tom Glavine also has a Rookie Card in the set, but he was not given the Rated Rookie distinction. 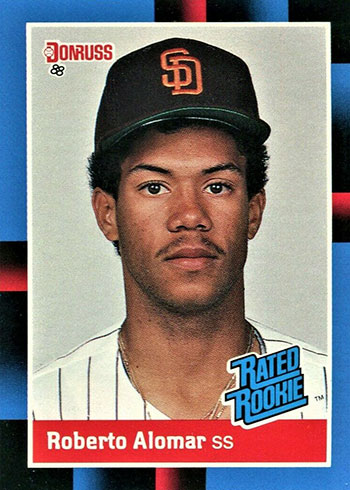 It may be mass-produced, and it may be hard to find in mint condition, but the 1989 Donruss Ken Griffey Jr. card still holds a special place in any Junk Wax Era collection. 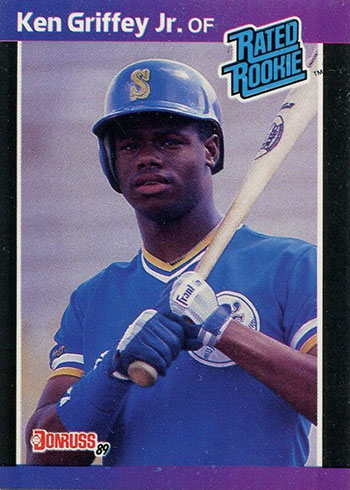 The reverse negative Juan Gonzalez rookie card is one of the most recognizable error cards of the 1990s, with the right-handed hitting slugger clearly misrepresented as a lefty hitter with the backward “19” on his jersey giving it away.

Donruss eventually corrected the error and neither card is worth much today, but it’s a fitting representation of a largely forgettable set. 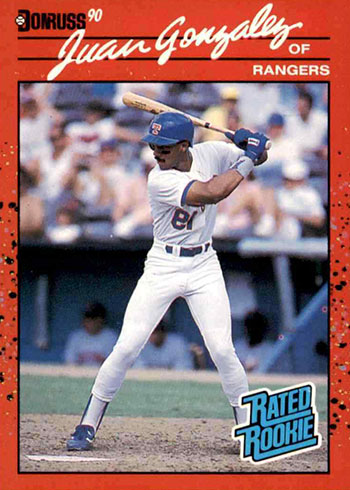 Aside from some longshot Elite Series inserts and an even longer shot Ryne Sandberg autograph, the 1991 Donruss set doesn’t have much going for it.

Mo Vaughn is the most recognizable face from the Rated Rookie selection, so he gets the nod even though his actual rookie card is found in 1990 products. 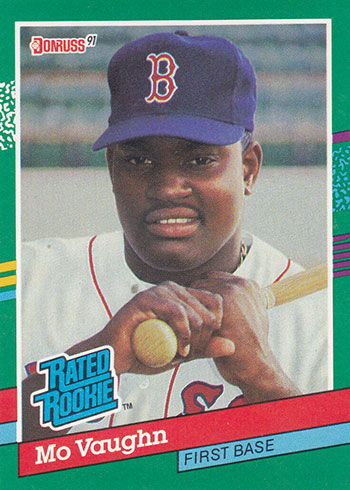 This card serves as a fun reminder that Jim Thome started his career as a third baseman. In fact, he was the team’s everyday starter at the hot corner during the 100-win season in 1995.

Both Jim Thome and Kenny Lofton have their actual rookie cards in 1991 Bowman and 1991 Upper Deck Final Edition releases, but they were the best of the Rated Rookie bunch the following year. 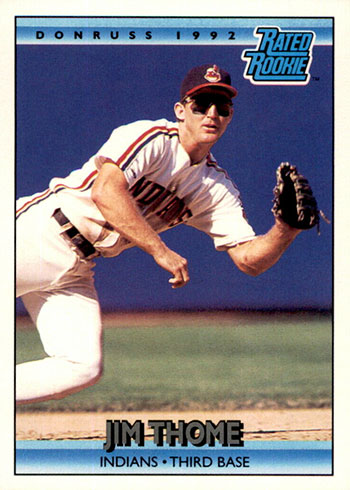 Unlike many of the Rated Rookie picks, Chipper Jones had not yet made his MLB debut when he was included in the 1993 Donruss set. The No. 1 overall pick in the 1990 draft was first included in 1991 products, but this was his first Donruss card. 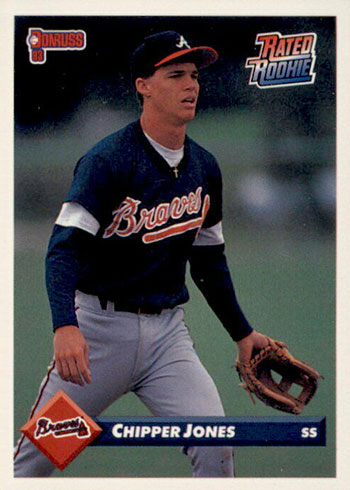 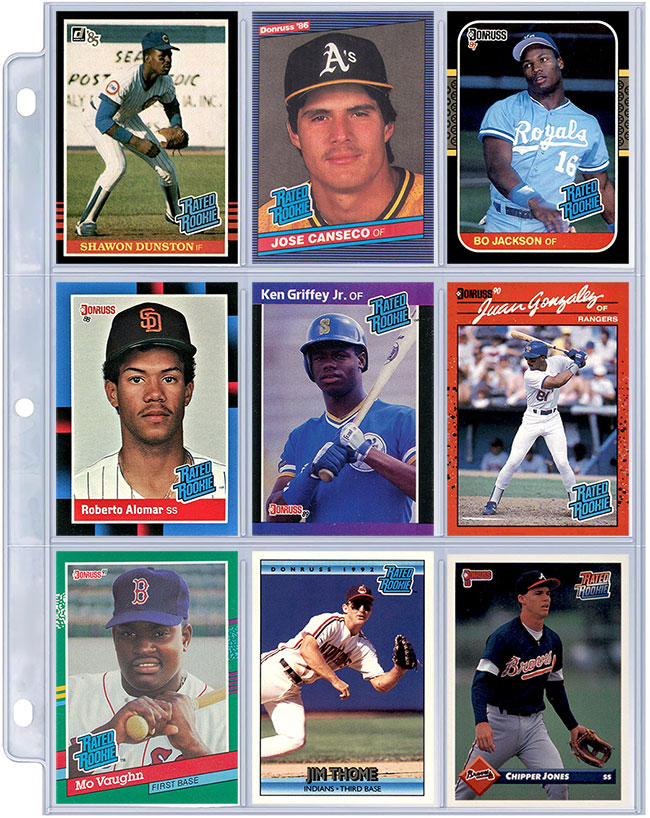