This time around, we turn our attention to this year’s Hall of Fame ballot, specifically the newcomers who are eligible for the first time.

Curt Schilling (70.0%), Roger Clemens (61.0%), Barry Bonds (60.7%) and Omar Vizquel (52.6%) were the leading vote-getters among 14 players who fell short of the requisite 75 percent needed for enshrinement while receiving the necessary five percent to stay on the ballot last year.

They will now be joined by a new wave of players five years removed from retirement. It’s far from a star-studded group with no slam-dunk Hall of Famer, but there are still some notable names and we’ve chosen rookie cards for the top nine to make up this week’s collection.

One of the biggest draft steals in MLB history, Buehrle was a 38th-round pick in the 1998 draft out of Jefferson College in Missouri.

The soft-tossing lefty was the definition of a workhorse, tallying at least 198 innings pitched in each of his 15 full MLB seasons. He was a five-time All-Star, four-time Gold Glove winner and he pitched a no-hitter and a perfect game. 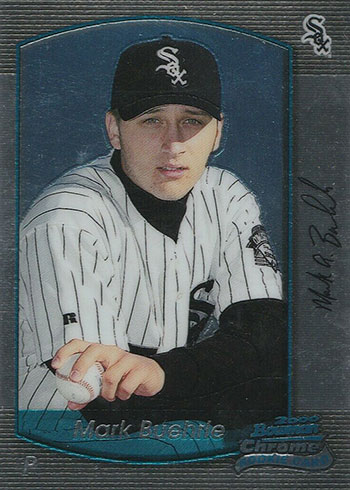 A five-time All-Star and nine-time Gold Glove winner, Hunter was one of the best center fielders in recent memory, consistently impacting the game with his glove and his bat.

Considering his first-round pedigree, it’s a bit surprising that his only other Rookie Cards are in the 1994 Pinnacle and Score releases. 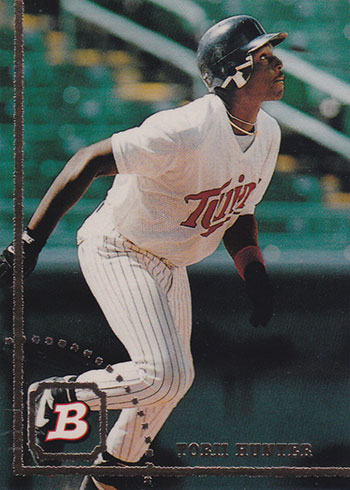 The Oakland Athletics selected Tim Hudson in the sixth round of the 1997 draft and he made his MLB debut two years later, going 11-2 with a 3.23 ERA in 21 starts to finish fifth in 1999 AL Rookie of the Year voting.

His other Rookie Cards options include 1999 Bowman, Fleer Tradition Update, Pacific Omega and a short-printed Upper Deck Ultimate Victory card that ranks as his most valuable RC. 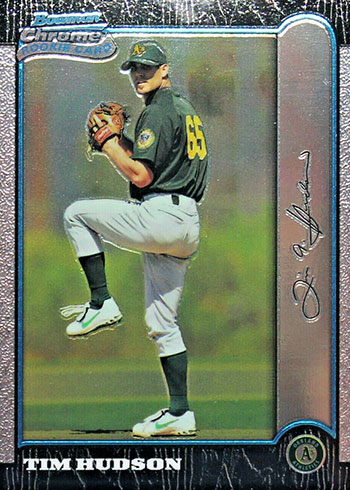 Ramirez put together a 34-homer, 112 RBI season at the age of 23 with the Pittsburgh Pirates, but that didn’t stop them from trading him two years later to the Chicago Cubs.

He went on to hit 239 long balls in nine seasons with the North Siders before inking a four-year, $50 million contract with the Milwaukee Brewers that took him to the end of his career. He finished with 386 home runs, 1,417 RBI and a 115 OPS+.

The 1997 Bowman and Bowman Chrome products contain his only Rookie Cards. 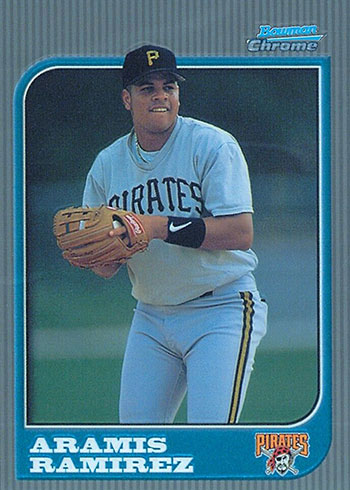 Originally drafted by the Cardinals, Haren was traded to the Oakland Athletics in the blockbuster deal that sent Mark Mulder to St. Louis. 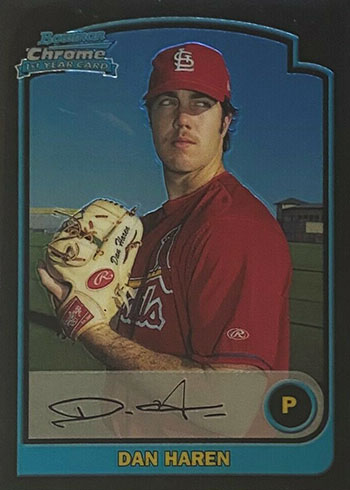 Armed with a wicked curveball, Zito was part of Oakland’s “Big Three” along with Tim Hudson and Mark Mulder during the 2000s. 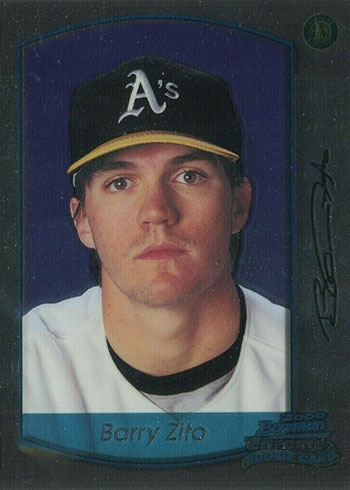 Shane Victorino played 36 games with the San Diego Padres in 2003, then spent the entire 2004 season in the minors before he was selected by the Philadelphia Phillies in the Rule 5 draft.

He has a wide array of 19 different Rookie Cards, including autographs in 2003 Hot Prospects and Leaf Certified Materials. 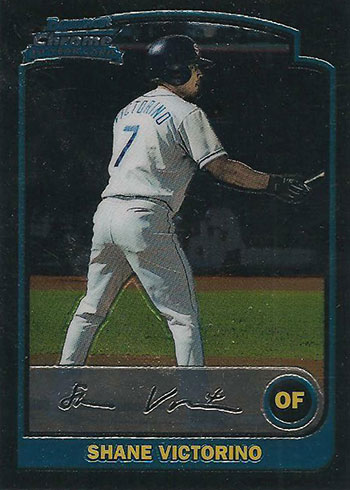 The Florida Marlins acquired Burnett from the New York Mets prior to the 1998 season when Al Leiter was shipped out as part of the massive fire sale following the 1997 World Series title.

He has 17 different Rookie Cards, with the most valuable of the bunch being a Fleer Mystique release that was numbered to 2,999. 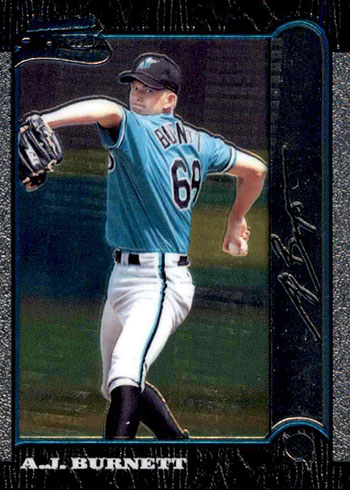 A dynamic power-speed threat early in his career, Sizemore averaged 6.2 WAR during the four-year stretch from 2005 to 2008, capping off that run with a 30/30 season.

Unfortunately, injuries derailed his career from there, and he never played more than 112 games in a season after his age-25 campaign. He’ll go down as one of the biggest “what-ifs” in baseball history.

A third-round pick in 2000, he was included in the Bowman Draft release that same year for his only Rookie Card. 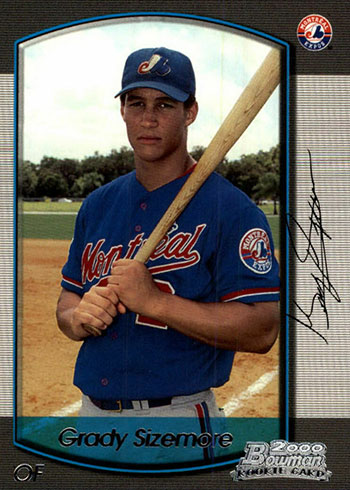 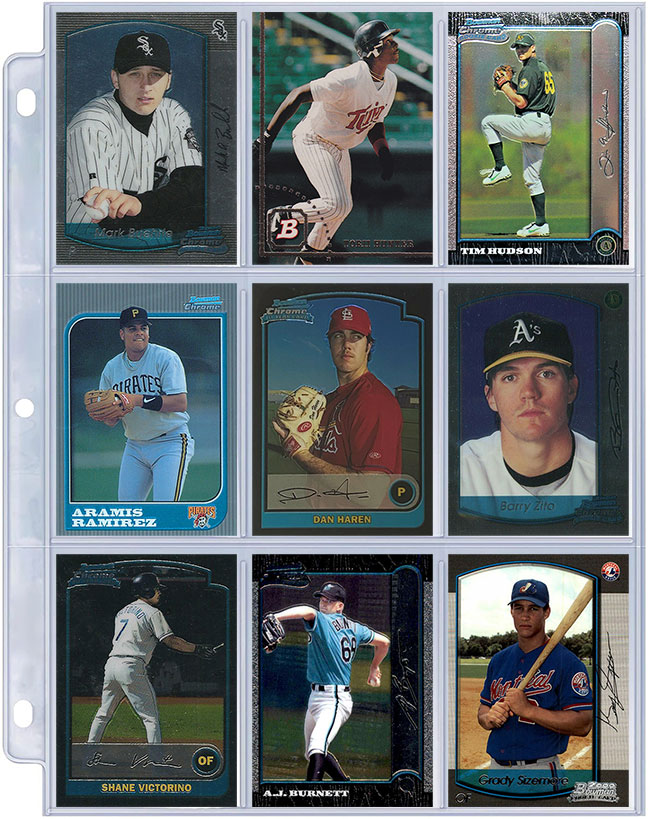