When it comes to Rookie Cards, 2019 started off a little slow for baseball. What a difference a couple of hot starts and early-season debuts make. In Nick Senzel, the Cincinnati Reds appear to have found both. Drafted second overall in 2016 behind Mickey Moniak, Senzel began his pro career with high expectations. Now that he’s made his MLB debut, collectors can expect the first Nick Senzel Rookie Card in the not-too-distant future.

But like most players, there are lots of Nick Senzel cards to choose from already. Here’s a look at some of his top cards to arrive before his first pack-inserted RC.

This list looks at some of the best and notable Nick Senzel cards primarily covering prospect and minor league issues as well as autograph inserts. This is meant to offer some main highlights. A full checklist of Nick Senzel cards can be found in the Beckett database.

Nick Senzel’s pro career started with the Billings Mustangs, Cincinnati’s Rookie affiliate from the Pioneer League. It’s also where he got his first minor league card. With distribution largely centered around the local market, you’ll probably have to look to minor league card dealers to find one (unless you know an avid baseball fan in Billings, Montana). 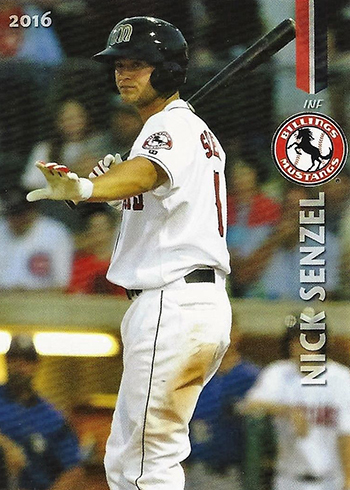 Although many of Nick Senzel’s biggest Bowman cards came out in 2017, they weren’t his first. A tough box topper insert in 2016 Bowman Draft has the distinction of being Senzel’s first MLB-licensed card. Without a signature, though, it’s somewhat overlooked. That said, with just 99 copies of the base version and not a lot of parallels, there aren’t many to give it mass appeal to begin with. 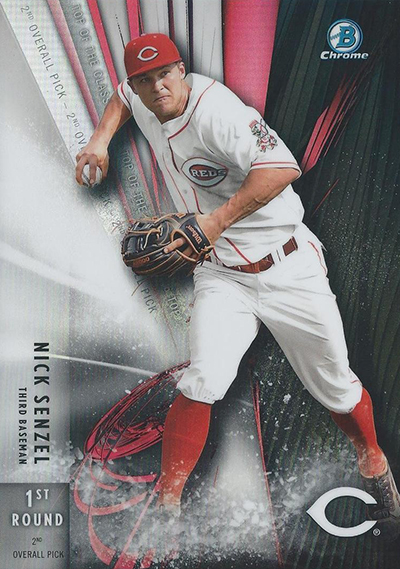 2016 Elite Extra Edition was the first set to include Nick Senzel autographs. His main signature in the set takes on a similar design to the foil base set as well as an extensive list of parallels. The regular 2016 EEE Senzel card is serial numbered while the autograph is not. 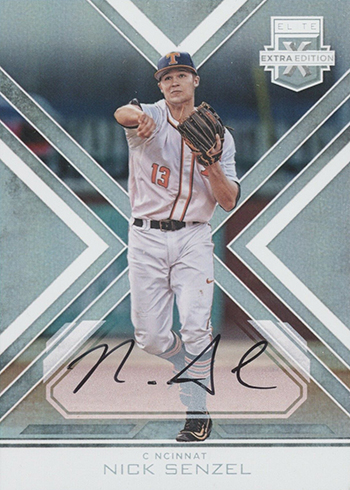 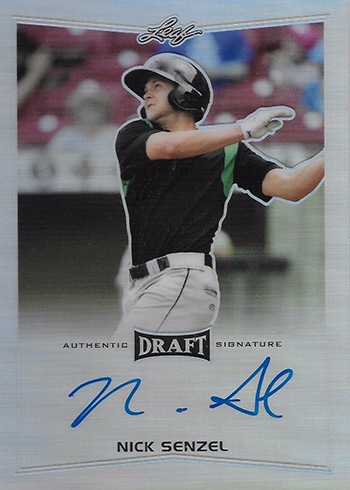 2016 Leaf Trinity Baseball has three types of cards and Senzel is present in all three. The first, Trinity Autographs, have a lot of white space. That’s intentional as many players — including Senzel — include inscriptions. 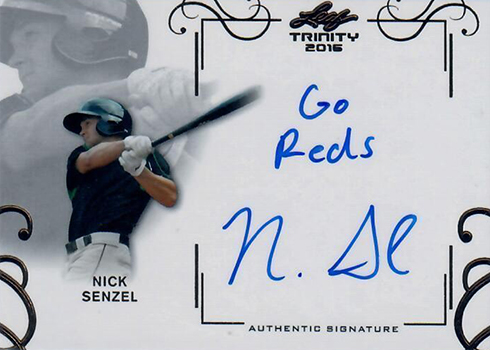 Clear Autographs get their name from the plastic-like stock they’re printed on. And with it comes plenty of contrast to help give the signature a little bit of extra pop. 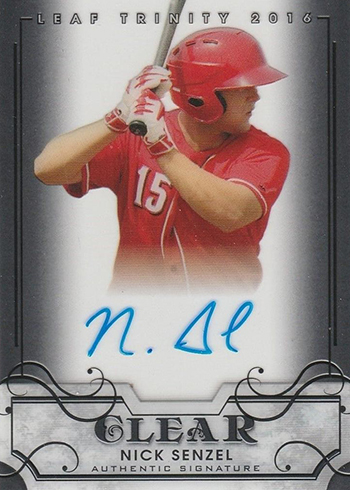 The layout for this one is similar to the main Trinity Autograph. However, there’s a big difference in the center. While the autograph is still there, the inscription has been replaced by a jumbo patch swatch from a Senzel-worn jersey. The memorabilia isn’t game-used but most of the pieces include some aesthetically pleasing colors and patterns. 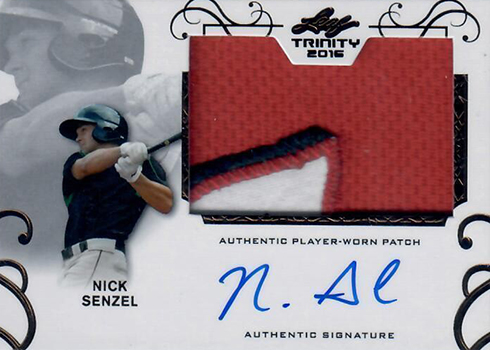 Found in packs of 2016 Elite Extra Edition, this insert brings the popular Contenders Ticket theme (along with several of the parallels found in football and basketball). 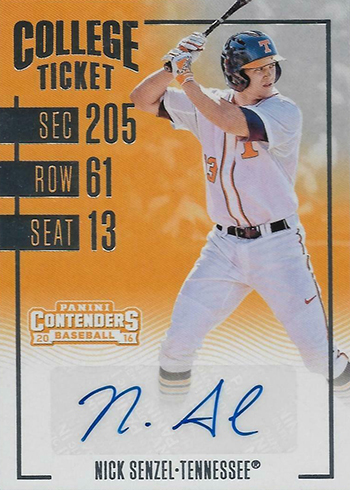 The 2017 Bowman Mega Box caused quite a stir for a couple of reasons. As a Target-exclusive, finding them was tricky for some. They also disappeared from store shelves before returning a few months later. And there’s also the fact that it was the first place to have English Shohei Ohtani cards. Now that the hype has settled, it’s time to see that there’s more to the configuration including this autograph. It’s on a sticker but it stands out for it’s background pattern, sometimes referred to as a “Mojo Refractor.” 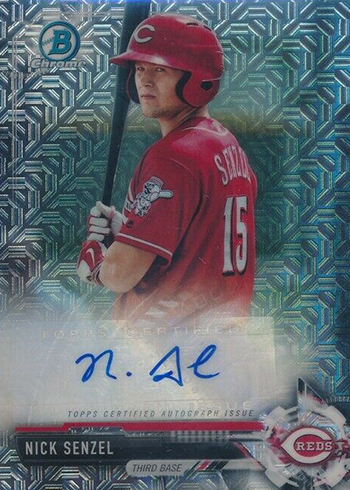 This 2017 Bowman Chrome Prime Chrome card gets an upgrade of sorts over most of Nick Senzel’s other autograph cards. In addition to the customary “N. Sl” there’s an inscription to go with it. Included in packs of 2017 Bowman Chrome Baseball as a redemption, it appears as though the base version has his Twitter handle while parallels say, “Go Reds.” 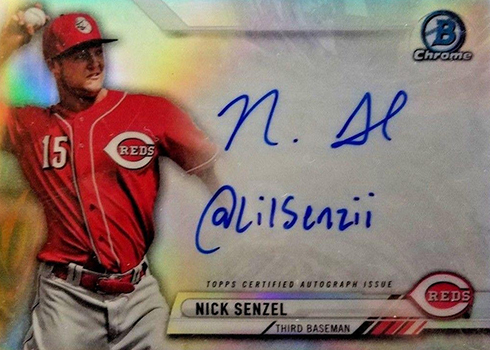 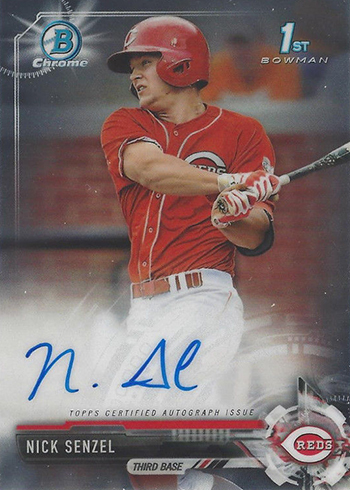 Autographs are great, but they’re not for everyone. Nick Senzel has no shortage of unsigned cards from his days as a prospect, but like it’s signature counterpart, there’s something about Chrome. Besides costing relatively little, there’s the chase of more than a dozen Refractors for those who so choose. 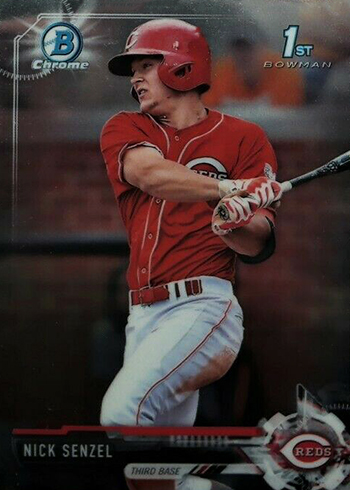 2017 Bowman High Tek expands out of the main Topps Tek line with some big designs and clear acetate stock. For this particular release, it also meant a lot of autographs. Included in packs as a redemption, the signature comes on-card. This is another one of many more affordable Chrome alternatives. 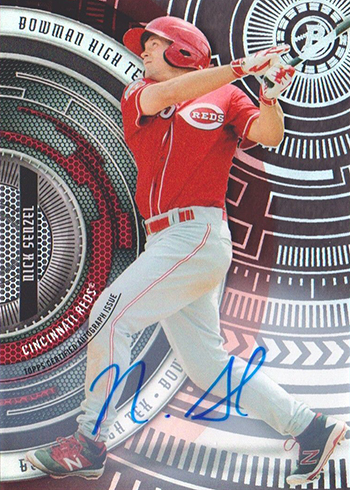 2017 Bowman Platinum Baseball released as a Walmart-exclusive. Initially, it was driven by the first Cody Bellinger Rookie Card and the mania surrounding Aaron Judge. But there’s more to the checklist than just those two standouts. Like a lot of 2017 Bowman sets, there’s a Nick Senzel autograph. Actually, he has a couple of additional rarities beyond the main Top Prospects Autograph.

That said, it does appear as though the base Nick Senzel Top Prospects Autograph doesn’t have a huge supply. Although it’s not confirmed by Topps, it doesn’t appear that Senzel has the Purple (/150) and Green (/75) parallels a lot of the other cards in the set have. 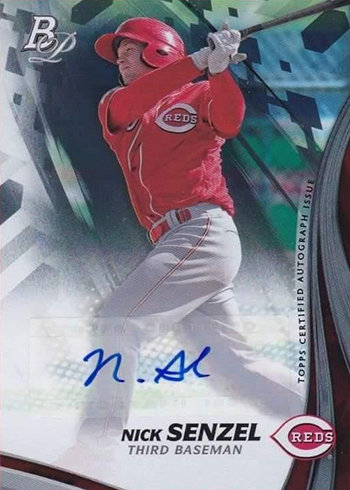 Typically, when you put them alongside Chrome, regular Bowman (or “Paper”) Prospect Autographs are like going from a Porsche to a Kia. Both get the job done, but there’s an undeniable prestige that comes with Chrome. Regular Bowman autographs like this use stickers instead of on-card signatures. They’re exclusive to retail packs. And, let’s be honest, shiny is much nicer to look at.

But here’s the thing — search for a 2017 Bowman Chrome Nick Senzel autograph and you’ll find lots of options. Wicked stepsister regular Bowman might not be as attractive, but it’s also significantly tougher to find on the secondary market. 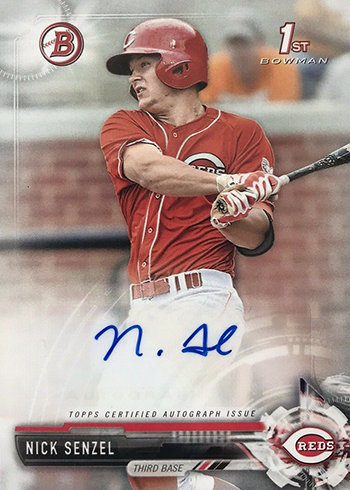 When you compare Bowman Chrome and Bowman’s Best autographs from the same year, one is priced much higher than the other. For marquee players, Bowman Chrome autographs can get out of reach for a lot of collectors in a hurry. Bowman’s Best, on the other hand, are noticeably cheaper. They still come with on-card signatures and showcase players in their MLB threads. 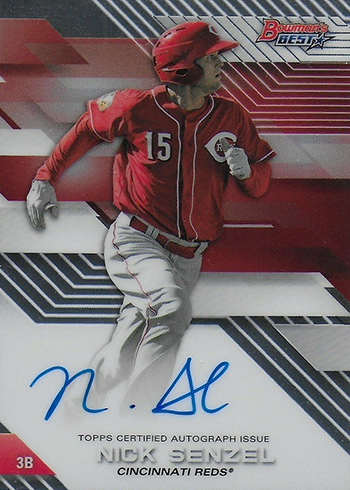 If it has Heritage and an autograph, the card is likely to be popular. This Nick Senzel card was originally issued as a redemption. The final card racks up some strong prices that are higher than some of his 2017 Bowman-branded autographs. It appears as though all of the autographs were done with a thick silver marker. 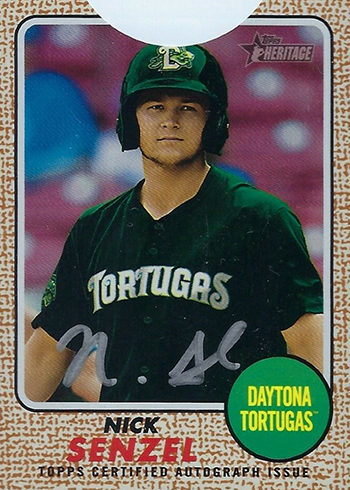 The 2017 Topps Pro Debut Autographs Nick Senzel is another minor league signature. Unlike Heritage Minors, this one uses a sticker. From the looks of it, this is one of the set’s toughest cards. It doesn’t appear as though there’s a base version of Green (/99) and Orange (/25) parallels. If this is the case, Red (/10) and Black (1/1) are the lone copies.

One thing to watch for is that minor league sets like this are popular with through-the-mail and in-person autograph collectors. Pack-inserted Topps autographs include a note to differentiate them from signed base cards. For this particular card, there’s also the fact that it uses a sticker. 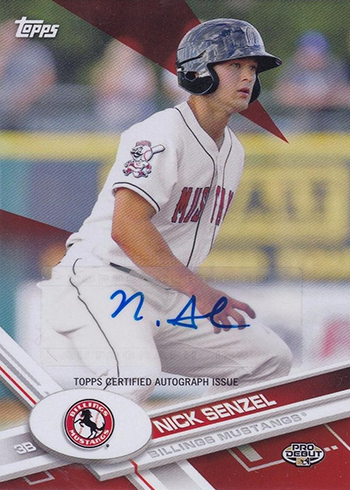 Like a lot of players in the past couple of years, Senzel’s first baseball card as a major leaguer is from Topps Now. The print-on-demand card was available for 24 hours and sold 2,217 copies. It commemorates both his debut game and first MLB hit. Senzel has multiple cards in 2019 Topps Now Baseball. This includes one from the following day for his first home run, which sold 1,271 copies. 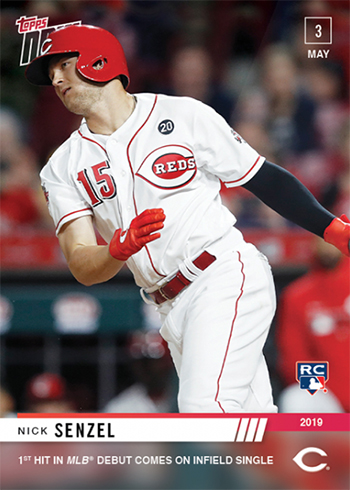