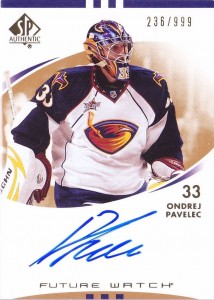 (Please note that moving forward the NHL Hobby Stars weekly post will be moved to Tuesday’s).

It’s Wednesday, and that means we run down the three Hobby Stars of the Week and let collectors know why they should examine their cards.

Ondrej Pavelec, G, Winnipeg Jets
Pavelec, apparently the NHL’s biggest Bruce Springsteen fan, was 3-0-0 last week with a 0.97 goals against average, and a save percentage of .970 as he helped the Jets cling to the final playoff spot in the West. Pavelec and the Jets played host to San Jose to open the week defeating the Sharks 5-2 behind the net minding skills of Pavelec who made 38 saves. The Blues then came calling but Pavelec denied them entry as he turned away 32 of the shots he faced as the Jets won 2-1 in shootout. The Jets closed the week hosting the Caps as Pavelec recorded his second shutout this season winning the game 3-0. This season he has spilt time with rookie standout Michael Hutchinson in net but at the playoffs approach the veteran will play a key role in the Jets success. If he continues his solid goaltending then the results could be seen on the secondary market as well. Pavelec only has 13 Rookie Cards listed in the Beckett database all of which are affordable at present time but a strong push in the post season could see those prices rise.

Oh, he also really seems to like “The Boss”, I mean just check out that mask. 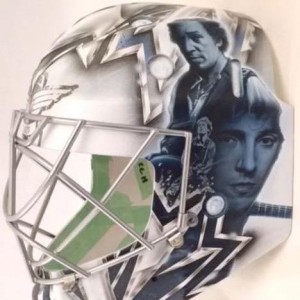 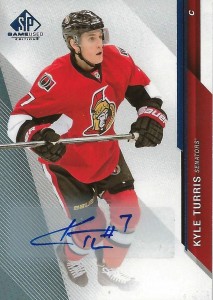 Kyle Turris, C, Ottawa Senators
Turris led the league last week with four goals and shared first place with six points (4-2-6) as the Senators pushed their way to within a point of the final playoff spot in the East. The week opened for the Sens in Carolina where Turris dished the biscuit to Mark Stone as he scored in overtime resulting in a 2-1 victory for Ottawa. Turris notched his second multi-goal game (2-1-3) of the season as Ottawa defended the Canadian Tire Center against the visiting Bruins winning 6-4. Turris did much of the same when Toronto came calling netting two more goals (2-0-0) as the Sens downed the Leafs 5-3. Turris was the third over all pick in the 2007 NHL Entry Draft by the then Phoenix Coyotes but Ottawa has been where he as showed his potential. Ottawa’s playoff push has been surged by the  the outstanding goaltending of Andrew Hammond and great play by a core group of key young players that includes Turris. The Beckett database reflects that he has 21 Rookie Cards and 128 autographs. Investing now would not be a bad idea for the collector. 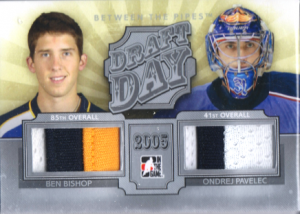 Ben Bishop, G, Tampa Bay Lightning
Bishop recorded a .935 save percentage, a 2.00 goals against average, and a 3-0-0 record last week as Tampa Bay picked up wins against divisional foes. Bishop recorded 32 saves to open the week as the Lightning downed the Canadiens 4-2. Mid week found the Red Wings in town, and Bishop stopped 30 shots as Tampa Bay won 3-1. Bishop closed the week with 25 saves as the Lightning outlasted the visiting Bruins in a 5-3 victory. Currently Bishop ranks third in wins this season with 36 of them. Last season Bishop got hurt as the Lightning made their playoff push and things quickly went down heel from there. This season he is healthy and Tampa bay is firmly holding on to the second spot in the Atlantic Division. With his strong play his 12 Rookie cards and 20 autographs could see a boost on the secondary market as well. 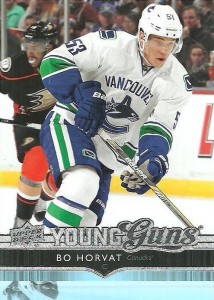