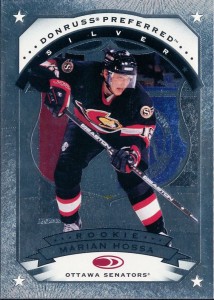 Marian Hossa, F, Chicago Blackhawks
The Blackhawks forward led the league with five goals last week and was tied for second with six points. Early in the week Hossa netted two goals each in a shootout loss to the Coyotes and in an overtime loss to the Canucks. Later in the week he posted another multi-point game against the Devils where he had an assist and put one in the back of the net as well (1-1-2) as the Blackhawks cruised to a 3-1 victory in New Jersey. On the collecting front it’s interesting to note that he only has six Rookie Cards in the Beckett database and 313 autographs, and given that he has been in the NHL since the 97-98 season that seems surprising. He does however have a following on the secondary market and can be had at a reasonable price point. 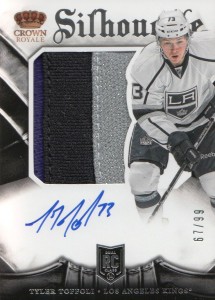 Tyler Toffoli, F, Los Angeles Kings
Toffoli shared the lead with Marian Hossa last week with six points (4-2-6) as he help move the Kings closer to a Wild Card spot in the West. He scored against the Blue Jackets as the Kings won 4-3 early in the week.  In his next outing three nights later he posted his first career hat trick (3-1-4) in a 5-3 victory over the Flames, then ended the week with a an assist as the Kings toppled the Capitals 3-1. Toffoli is only in his second season and in that short time has given collectors reason to invest in him. His play suggests that he has a bright future in the NHL. His rookie cards sale for around mid-book on the secondary market but his high end offerings can demand a premium from collectors. If you haven’t already, now would be a good time to jump on the Toffoli boat. 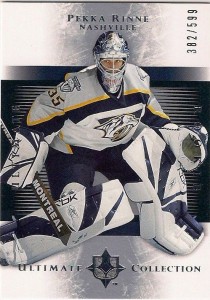 Pekka Rinne, G, Nashville Predators
As goalies go, Rinne led the pack last week as he went 3-0-0 with a 1.30 GAA and a .954 save percentage. He stopped 30 pucks in a 3-2 overtime win against the Lightning to open the week, and then upped his saves to 32 two nights later as the Predators downed the Jets 3-1. Rinne then finished the week with 21 saves against the Devils in another 3-1 victory. Nashville is setting in first place and it’s no wonder with play like this from their goal tender. He has been arguably the best in the NHL this season and has collectors taking notice of what’s happening in the Music City. He has 10 Rookie Cards and 165 autographs in the Beckett database, all of which can be had for reasonable prices on the secondary markets. 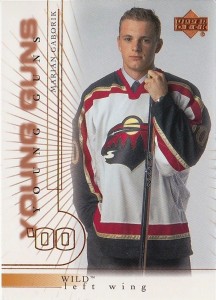