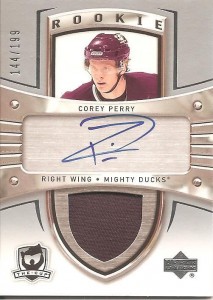 Corey Perry, RW, Anaheim Ducks
Perry was stellar on the ice last week as he shared the lead in scoring with four goals and six points as the Ducks gained five of the possible eight points available in the standings. He reached the 20-goal mark on the season with his performance in Carolina early in the week, tying Paul Kariya for second place in franchise history with seven such seasons. The rest of the week saw Perry netting goals against the Predators and Capitals and closing with an assist in a 5-3 loss to the Lightning. In the Beckett database collectors will find that Perry has 17 rookies and 296 autographs, all of which are still affordable on the secondary market.  For a guy in the middle of solid career his cards are priced right were they should be. 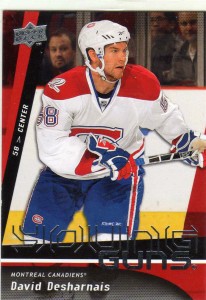 David Desharnais, C, Montreal Canadiens
Desharnais was in top form last week as he showed off his passing skills racking up the points with five assist and +6 rating. In the weeks opening tally the Canadiens fell to the Sabres  3-2 but Desharnais put one in the back of the net and had a helper as well. He then tied a career mark with thee assists in a 6-2 win over the Devils and ended the week with an assist against the Bruins as the Canadiens swept the season series against Boston. From a hobby standpoint, Desharnais only has 144 cards in which includes two Rookie Cards and two autographs. Canadiens collectors will be pleased to find that his cards are affordable as well. 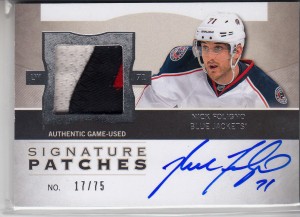 Nick Foligno, LW, Columbus Blue Jackets
Foligno stood out in the league last week posting three goals and one assist (3-1-4) as the Blue Jackets are fighting for a playoff spot. He was held off the boards against the Coyotes as the Blue Jackets fell in the desert 4-1. However when the puck dropped against the Blues three nights later, he came up big as he scored on his career high 19th and 20th goals and adding an assist helping Columbus route the Blues in a 7-1 victory, snapping a seven-game losing streak.  The next night in Ottawa he scored the winning goal against his former team rounding out a solid performance for the week. Collectors have caught on to Foligno this season but he is still affordable and could prove to be a great investment.  He has 408 cards in the Beckett database, including 19 Rookie Cards and 114 autographs, and his stock is rising. 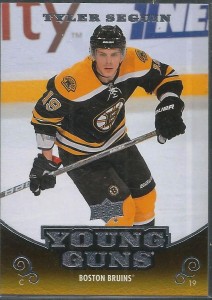