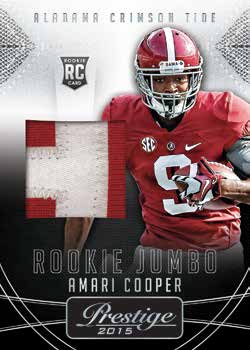 Will your top NFL rookie be among those with event-used memorabilia cards and autographs when the first 2015 NFL products arrive?

Now’s the day you can find out.

The NFL Players Association released the list of  more than 40 top rookies who will be in attendance at the signing session and photo shoot known as the NFLPA Rookie Premiere First held back in 1994, it’s the annual event where players gather to sign autographs for future products and be captured in their pro uniforms for the first time. This year’s event begins Thursday in Los Angeles and Topps and Panini America will be there.

“NFLPA Rookie Premiere is the best opportunity for our partners to engage early on with the next wave of the NFL’s marketing stars,” said Ahmad Nassar, President, NFL Players Inc., in a  prepared release. “Beyond providing a platform to learn about the business of football and benefits of their union as they game plan for their new careers, Rookie Premiere gives players a chance to showcase their personalities so that the NFLPA team can use that insight to connect the right players with the right brands to tell their story.”

See the full list of attendees … after the jump.