With another day at the 2014 National Sports Collectors Convention drawing to a close, the thousands of collectors coming through the doors are undoubtedly relaxing and taking a good look at the amazing items they purchased today.

Once again, Beckett Media has taken to the show floor to look out for some unique collectibles and share them with readers. While many dealers are carrying a large amount of baseball and football-related items, there are some compelling hockey and basketball pieces that could be found with a little bit of digging.

Before the 1976-77 season began, the NHL’s California Golden Seals headed east to become the Cleveland Barons. The hard-luck club only lasted two seasons in nearby Richfield before folding and being merged with the Minnesota North Stars in 1978.

Many promising talents suited up for the Barons during their two years in the league including Dennis Maruk, Al MacAdam, Charlie Simmer and Gilles Meloche. The team name has also seen some use at the American Hockey League level in the past. 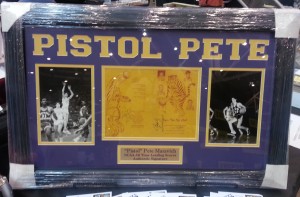 “Pistol Pete” autographs are sometimes a challenge to find, but any fan or collector of his memorabilia would certainly love to have a nicely presented framed piece like this. While the autograph itself is not the clearest or cleanest, its rariety trumps such concerns. For many years, his signature was quite difficult to obtain, but he softened his stance on giving autographs during the last few years of his life.

For many collectors on the floor, our first knowledge of the hobby’s history came from the early work of hobby pioneer Dr. James Beckett.

These books evoke memories of a simpler time and laid the foundation for the magazine and the website you are reading today. Seeing such a wide selection is a rare treat and there are several others that can be spotted at the Beckett Media booth during the show as well.

While it had been technically sold already, this phenomenal piece of NBA history was still on display at the Heritage Auctions booth today. The jersey and shorts worn by Bird at the beginning of his Hall of Fame career will certainly make some collector happy and are a true hobby treasure. 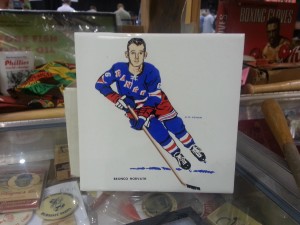 According to some researchers, these somewhat obscure ceramic tiles bearing the likeness of an NHL star were never officially released by Cowan Screenart. While these tiles likely never made it into home improvement projects since many were reportedly destroyed, they have developed a small collector following over the years. They are quite scarce today and command attention when put up for sale.

Corporate Exhibitors Making Their Mark at the ...

At the National: Busting packs with Jobu ...