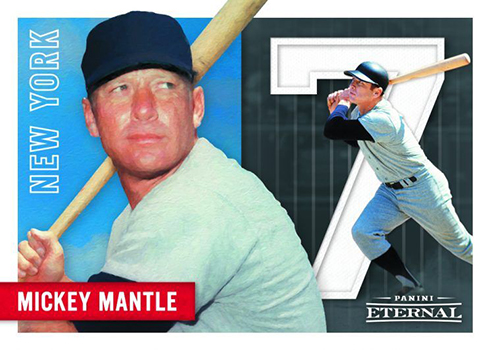 It has been a while since Mickey Mantle’s face was on a new baseball card. But that’s changing as Panini America has reached a multi-year agreement with the Hall of Famer’s estate.

The deal covers not only Mickey Mantle baseball cards but autographs and memorabilia as well. This allows Panini to acquire cut signatures and pieces directly from his family. Mantle will be included in up to six products each year. He’ll also be on packaging for a pair of products.

“Panini America has treated us like family from the beginning and blew us away with the amount of passion and respect their people have for our father and his legacy,” said Danny Mantle, Mickey’s son.

The first Panini Mickey Mantle cards won’t be included in packs will be released through the online Panini Eternal program starting April 3 under the Mickey Mantle Collection name.

Pack-inserted Panini Mickey Mantle cards are slated for 2017 Immaculate Baseball, which is currently scheduled for August. They will continue to appear in new products from that point on.

“We believe trading card collectors will be excited about what we will be creating in terms of product content and promotions by utilizing arguably the most collectible player in baseball history,” said Jim Stefano, Panini America Senior Director of Product Development.  “We plan to work closely with the Mantle family on The Mick’s triumphant and long-overdue return to the trading card marketplace.”

Although various companies have held exclusive deals with Mantle and his estate over the years, Topps was the last to do so. Their deal expired following the 2012 season and no new cards bearing his likeness have been produced since.