Floyd Mayweather vs. Conor McGregor: The Tale of the Cards 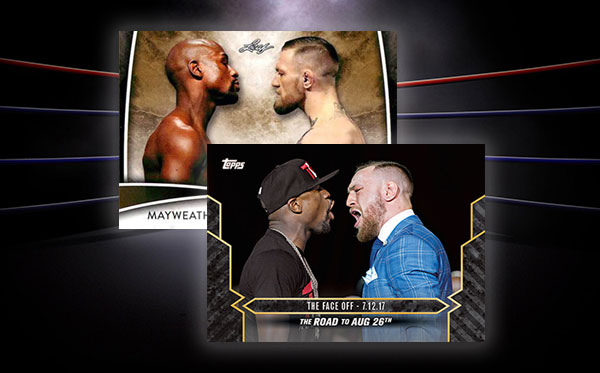 Floyd Mayweather versus Conor McGregor is the biggest fight in years. It pits two of the biggest names in sports. Not only that, but they’re also two of the most charismatic people around. Put it all together and the hype is real.

But what Mayweather-McGregor mean when it comes to cards and collecting? Probably not much as the fight is more spectacle than anything else. Both are bigger names because of the fight. But both also come from areas where cards are more niche collecting than mainstream.

You’ve probably come across countless breakdowns and bits of analysis of what to expect when the bell rings. So, here’s a look at what the cards hold for both men. It won’t help you sway your wager but it might offer you something to collect. 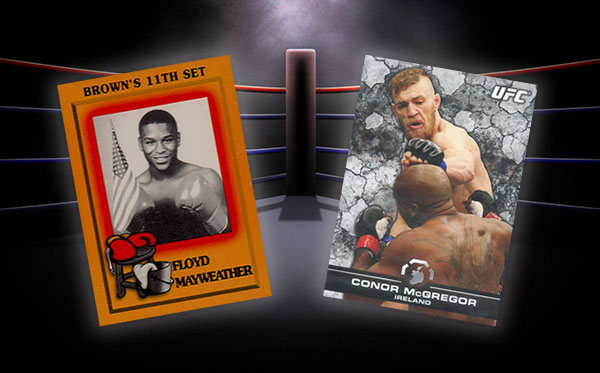 The first Floyd Mayweather card isn’t going to win any awards for its look, but that doesn’t mean much as far as value. It’s not one that you come across often. The 1997 Brown’s Floyd Mayweather was part of a set sold directly by the manufacturer. It’s believed to have a small print run as well given its old-school approach to distribution in an already small corner of the hobby.

The 2013 Topps UFC Bloodlines Conor McGregor takes a more traditional approach. Found in packs, albeit high-end ones, it has broken out in the years since its release. But for UFC cards, autographs and high-end memorabilia are king. So even a good Rookie Card in the traditional sense is bound to be overshadowed by something signed. And that’s the case with 2013 Bloodlines and Conor McGregor.

That said, the winner here is clearly the 1997 Brown’s Floyd Mayweather Rookie Card. It’s not pretty, but that’s boxing. Top-graded copies are now topping $1,000+ (someone is asking $250,000 for a BGS 10 copy, which is extreme no matter how you look at it). Meanwhile, the 2013 Topps UFC Bloodlines Conor McGregor can be purchased for under $100 raw and closer to $250 on the high-end of the graded scale. 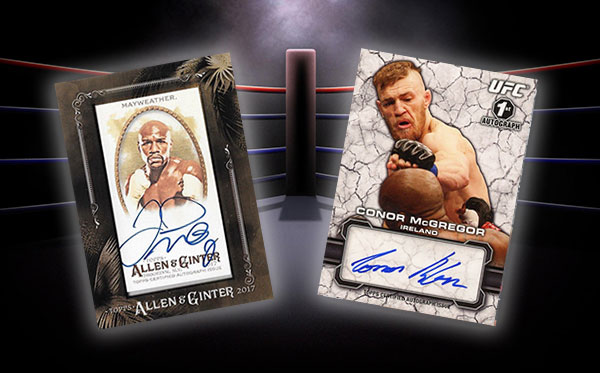 We’ve only recently gotten the first Floyd Mayweather autograph cards via 2017 Topps Allen & Ginter. And while it’s still a massive hit in the product, it’s probably not as high as it may have been if it were released ten years earlier.

As for the top Conor McGregor autograph card, it’s a lot like his Rookie Card. Also inserted in 2013 Topps UFC Bloodlines, it’s part of the Fighter Autograph inserts. It has a “1st Autograph” stamp noting that it’s his debut signature card. This is not only the best Connor McGregor autograph, but it’s his most important card, period.

In case you don’t want to choose, Leaf produced five dual autographs with both fighters. These were given away at the 2107 National Sports Collectors Convention in Chicago. 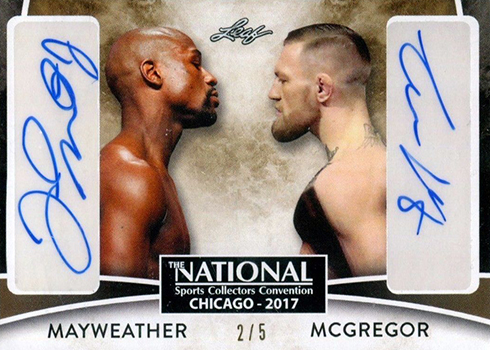 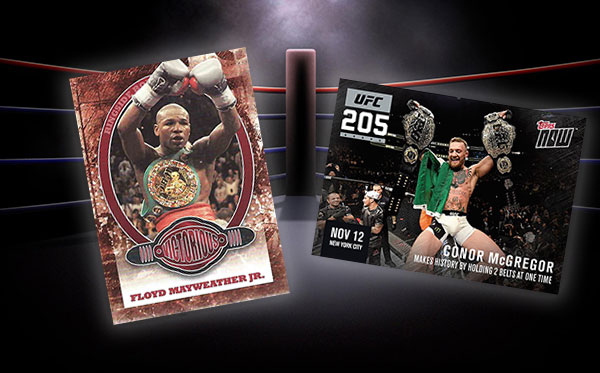 This is a tough thing to compare. Boxing doesn’t have a major card license and hasn’t had anything consistent for years, even decades. That puts a major limit on Mayweather’s spot in the hobby. Outside of a handful of key cards, there isn’t much out there. More are on the way, including some high-end autographs from Leaf. But that doesn’t change how things are now. 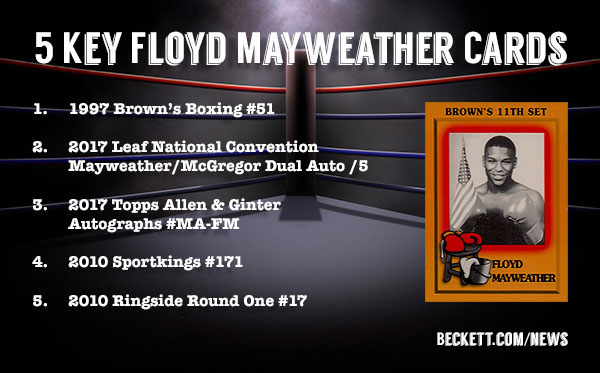 On the flip side, you have UFC where there has been a steady stream of products for years thanks to their deal with Topps. McGregor’s rise has come in recent years, but he has been a focal point in several products including autographs and some major memorabilia pieces. With this, he has made a name for himself in the hobby. It might not be on the same level as the Mike Trouts or Tom Bradys of the collecting world, but he does have a lot of cards that fetch a lot of interest and money. 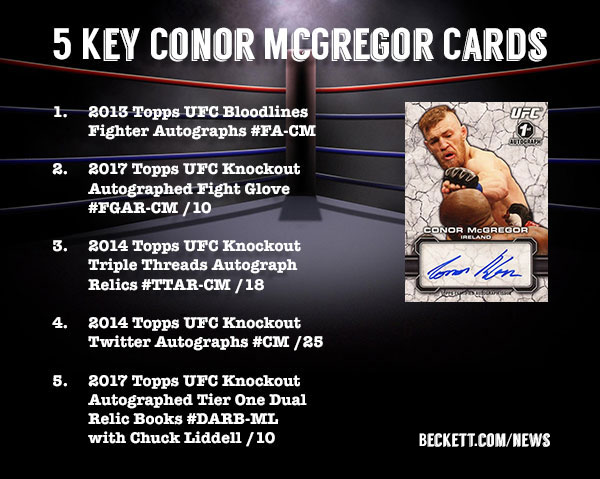 If the hobby landscape were a little different and boxing more established in the modern collecting world, things might be different. But the way things are now, Conor McGregor cards are king in this match-up.