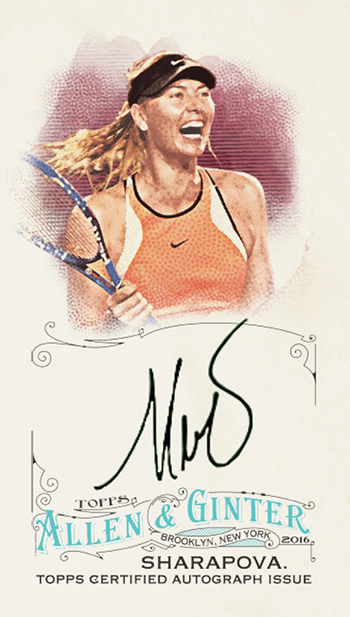 It might be called 2016 Topps Allen and Ginter Baseball, but it’s not all about baseball. It starts with the base set and trickles throughout the release. That includes autographs. And while the product is still six months away, Topps is starting to confirm some of the non-baseball signers for 2016 Allen and Ginter. The initial autographs checklist is highlighted by one of the biggest names in tennis, Maria Sharapova.

Sharapova is a former top-ranked player on the WTA circuit. A winner of five Grand Slams so far, she has also branched out into the candy market with her Sugarpova line of sweets. Maria Sharapova autograph cards date back as far as 2005 with Ace Authentic. More recently, she has a couple of signed cards in 2015 Epoch International Premier Tennis.

Joining Sharapova on the initial 2016 Topps Allen and Ginter Baseball autographs checklist are some other athletes. The recently retired Steve Spurrier helped guide the Florida Gators to the 1997 National Championship. He had a distinguished college football career as well as stints in both the USFL and NFL. As a player, Spurrier won the 1966 Heisman Trophy.

Boxing hasn’t had a full mainstream set of trading cards for several years. That makes it understandable that Gennady Gennadyevich Golovkin doesn’t have any cards yet. This is despite the fact that he’s currently the unified Middleweight Champion, holding the WBA, WBC, IBF and IBO belts. As a pro, Golovkin is currently undefeated with a 34-0 record. His next fight is scheduled for April 23 against American Dominic Wade who is also unbeaten (18-0). 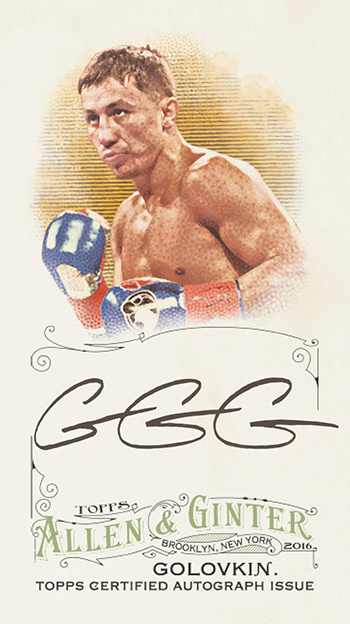 Rounding out the initial list of names is young swimmer Missy Franklin who won five medals at the 2012 Olympics in London including four gold.