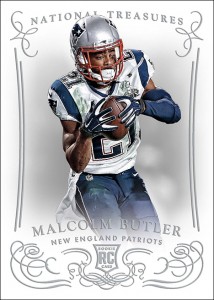 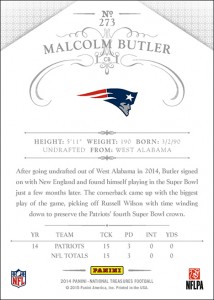 Patriots rookie defensive back Malcolm Butler will get his first Rookie Card in 2014 National Treasures.

The unlikely hero of Super Bowl XLIX made the game-saving interception at his own goal line with seconds remaining to give the Patriots its fourth Super Bowl title. The play will certainly go down as one of the most memorable moments in Super Bowl history. Butler is an undrafted rookie and has no NFL cards to date. After the Super Bowl, Panini America’s product development team reworked the checklist for 2014 National Treasures – which will be the company’s final release of the 2014 NFL product season — to make room for Butler. He will be card No. 273 on the National Treasures base set checklist.