The Chicago White Sox have had a parade of promising prospects in recent years. With Luis Robert, the best might have just arrived. How good? Enough so that Topps and Panini got permission to start the Luis Robert Rookie Card offerings before his official MLB debut.

The Cuban-born outfielder comes with quite the toolbox of skills: power, average, speed, defense. If he continues to put it all together, the South Side has a superstar in the making. Playing alongside Eloy Jimenez and Yoan Moncada, the trio make a formidable foundation for the Chicago lineup.

Robert originally signed with the White Sox in 2017 after defecting from Cuba. After spending the next couple of seasons progressing through the minors, Chicago locked Robert down with a $50 million, six-year contract. With a deal like that, it’s safe to expect that the young slugger will make the Opening Day roster when baseball returns. 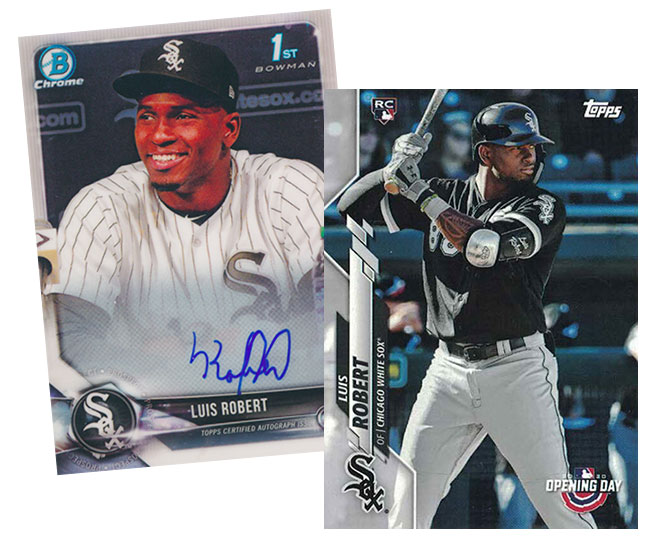 Within a few months of signing with the team, the first Luis Robert prospect cards appeared courtesy of Panini and their late 2017 sets. Topps followed in 2018 with Robert’s first MLB prospect cards. Hot since their release, a steady flow continued over the next couple of years.

With the first Luis Robert Rookie Cards already here, collectors can expect them to appear in products throughout the year. The end result should be a sizeable lineup of RCs, autographs and other inserts.

Here’s a breakdown of the various Luis Robert Rookie Cards. The list includes only base cards with the RC tag in the Beckett database. It does not include inserts. The list will be updated throughout the year as new sets come out. Cards are listed in alphabetical order.

With Chrome Prospect Autographs and Refractors being the major draw for 2020 Bowman, this is one of the more overlooked Luis Robert Rookie Cards. Oddly, Robert is part of the Prospects portion of the set as well with both a Bowman and Bowman Chrome card with a different photo (not to mention number). This could create some added confusion. The Rookie Card is the base card with the RC logo on the front. 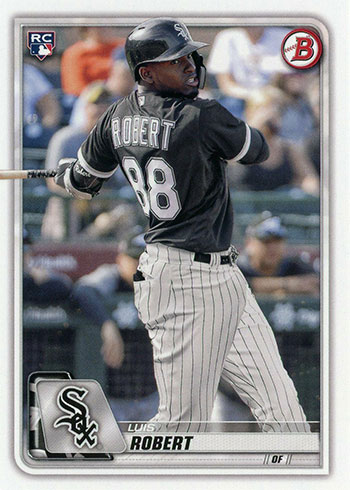 It might not be the Diamond Kings of 1980s Donruss, but the art theme is still there. The design brings color and some modern flair while the canvas-style stock gives it a bit of a texture. For an affordable option, it’s one of the most distinct. 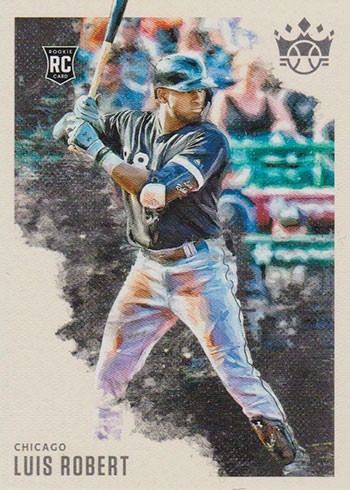 2020 Donruss gives Luis Robert the Rated Rookie treatment. Found at the end of the checklist, far removed from the other Rated Rookies near the start of the set, he was likely a late inclusion. This does not appear to be a short print. 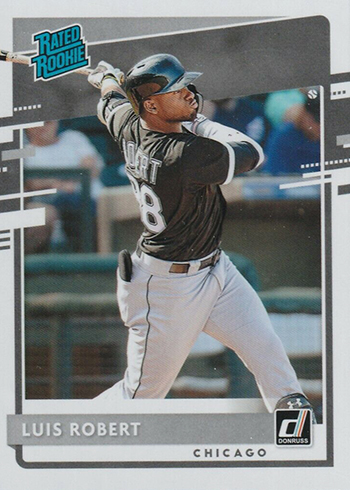 Chrome is an entire sub-category of the modern hobby landscape with several sets each year. With all emphasizing colorful parallels and often autographs, Finest stands out with its bold designs. While the Refractors certainly add to the rainbow, the 2020 Finest Luis Robert Rookie Card doesn’t need them for color. There’s plenty of that with its base version along with all sorts of modern lines and design elements. 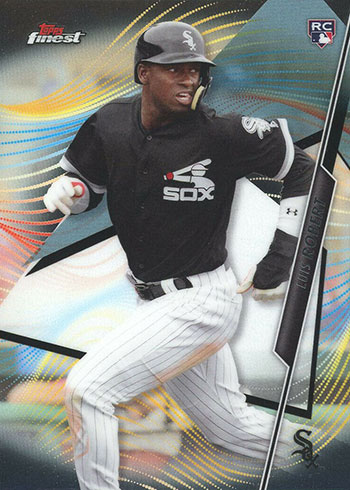 The 2020 Finest Flashbacks Luis Robert Rookie Card comes from an online-exclusive that quickly sold out to the general public. Another chromium option, this one is designed to look like 1993 Finest Baseball. The print run on this set is quite limited and prices for Robert’s RC quickly spiked right out of the gate. 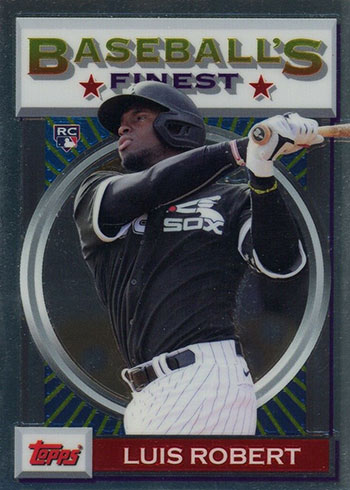 Robert’s RC in 2020 Absolute — or at least the final version once the redemptions are in — is part of the Rookie Baseball Material Signature subset. That means that it’s an autograph that’s done on a piece of baseball material. The look is similar to Sweet Spot’s cornerstone autographs from years ago or more recently in 2019’s Panini Leather and Lumber. The base version of this card has just 149 copies. However, there are several parallels as well, which when combined, are more plentiful. 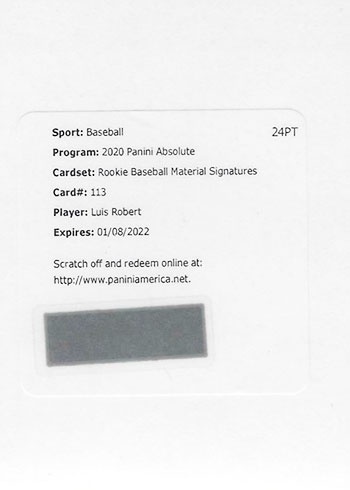 Another chromium release, this one comes from Panini. The 2020 Select base set has a tiered structure with cards getting progressively more tough. Robert’s RC is part of the Premier Level subset, which is part of the middle grouping. That makes it somewhat tougher to pull than the first 100 cards but not exceptionally rare. 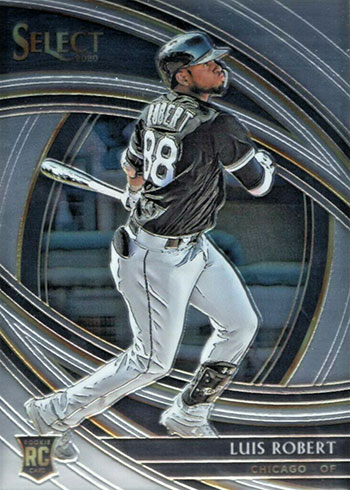 Found in packs of 2020 Topps Series 2 Baseball, this Luis Robert Rookie Card has the advantage of being part of the flagship line. So even though it’s nowhere close to being among his rarest RCs, tradition and recognition make up for it. It’s a benchmark card. Besides the regular version and its many parallels, there are three different variation short prints plus one with the same number that has Robert, Bo Bichette and Yordan Alvarez. 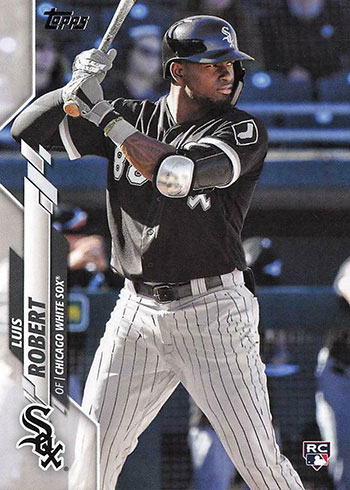 Hailing from one of the more affordable product of the year, the 2020 Topps Big League Robert card has a classy design that would fit in well in the ’70s. It doesn’t have much gloss, but the matte-style finish gives the colors a surprising amount of pop. It’s an example of using simplicity to its advantage. 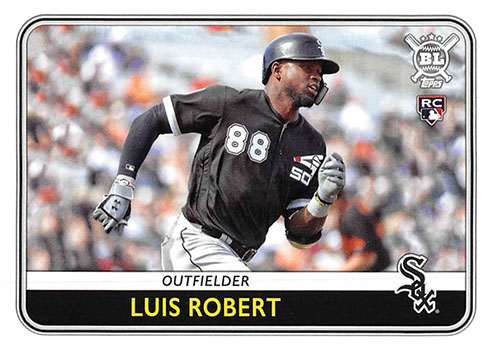 One of the most expensive products of the season, 2020 Topps Diamond Icons is the first set to include a Luis Robert Rookie Card with an autograph. The print run of just 25 copies will ensure its rarity. Even once you factor in the three parallels, there are only 41 total copies. Robert does have other autographs in the luxury-level product as well. 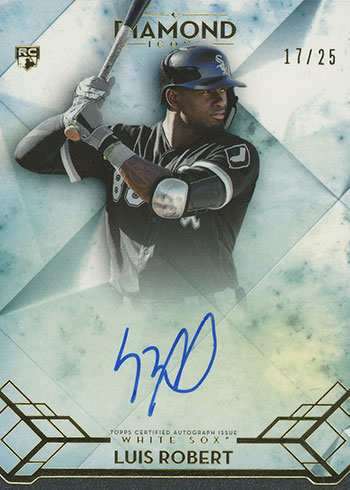 One of the earliest releases in the Luis Robert Rookie Card lineup, Gypsy Queen is a line that draws its inspiration from the days of tobacco cards. A fairly widely available set at both hobby and retail, it features a couple of parallels that go beyond basic colors like the Logo Swap and Bazooka Back, which has an old-fashioned ad on the back. 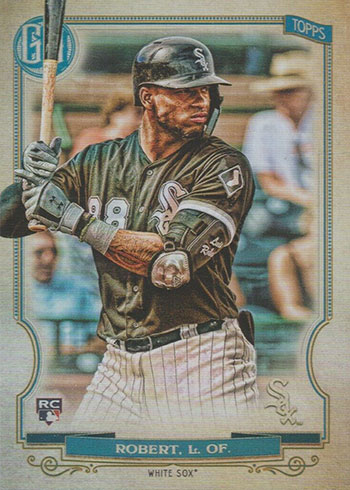 The first Luis Robert Rookie Card in a MLB base set is a short print. Normally, Opening Day offers up one of a player’s most affordable RCs. This likely won’t be the case here based simply on the fact it’s going to be difficult to find. That said, because 2020 Topps Opening Day is a plentiful and affordable release, it’s probably not too scarce. Early reports indicate they’re about 1:10 boxes. 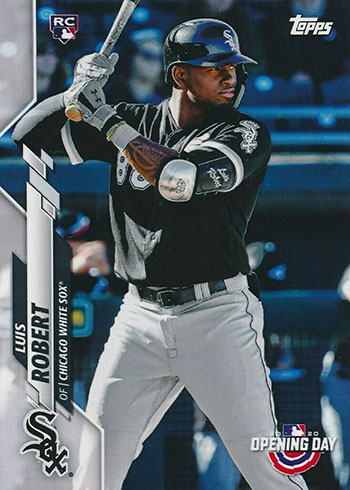 By the time his first Rookie Card arrived, Luis Robert already had several cards on the market. They’re either inserts in mainstream products or come from prospect-driven releases. Here are some of the highlights.

As is the case with virtually every player in the last 15 years or so, Robert’s first Bowman Chrome autograph ranks as his cornerstone card. It’s likely to outpace virtually all of his RCs in both value and recognition. However, it’s already out of reach for many collectors due to its high price. Base versions fetch hundreds while some of the Refractor parallels can go for much more. The one-of-one Luis Robert Superfractor autograph sold for $50,400 in August, 2019 through Goldin Auctions.

Distributed in 2018 Bowman Baseball, it’s actually a redemption. The expiry date for the card is March 31, 2020. 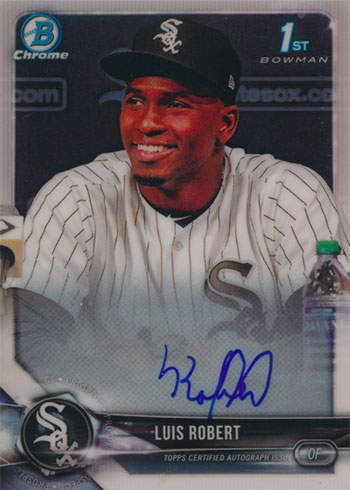 2018 Bowman Chrome might have the biggest Luis Robert autograph but it’s not the first. Panini included him in a couple of their late-season 2017 releases including Elite Extra Edition. His main autograph carries a similar design as the base set. The autograph is on a sticker, which makes it easy to tell apart from cards that may have been signed in-person. 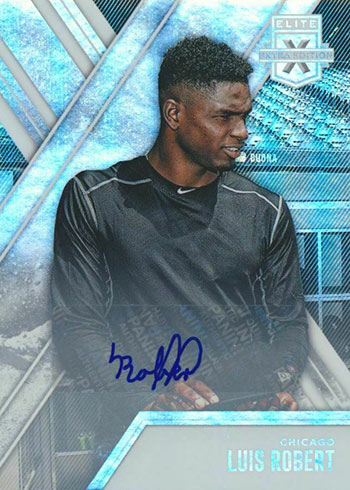 2017 Elite Extra Edition Baseball also has an autographed memorabilia card of the outfielder. The Future Threads card is done with a Silhouettes design, leaving room for a bigger swatch and more dynamic layout. There’s also versions of the card that don’t have the signature. 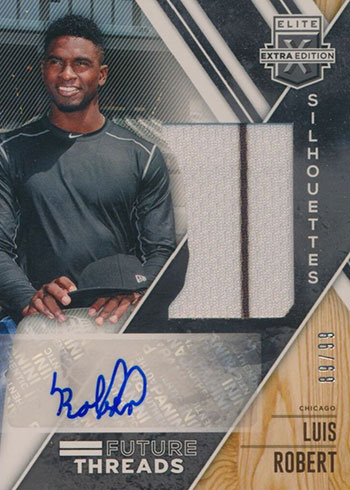 Boasting the familiar ticket motif that Contenders is known for, this was Panini’s first set to include both Luis Robert and his autograph. Releasing in October, 2017, it beat Elite Extra Edition by a couple of months. This particular card is from the International Ticket inserts, showcasing key signees from around the world. 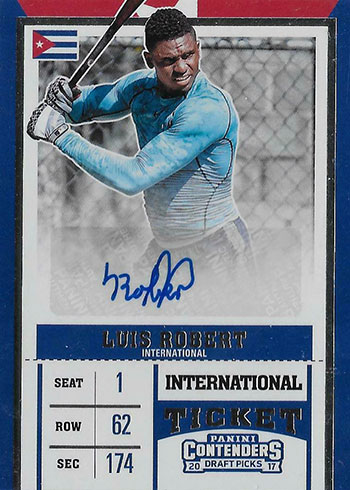 Not everyone is looking for autographs and high-end Luis Robert cards. Here are some more basic key early options that don’t fall under the hits category.

While much of the spotlight from the set is on the autographs, 2017 Elite Extra Edition has a regular Luis Robert card as well. Understandably, it’s a more affordable option. However, it does come serial numbered to 999 copies, giving it a little extra pop. Speaking of pop, the bright and colorful parallels bring more of that as well. 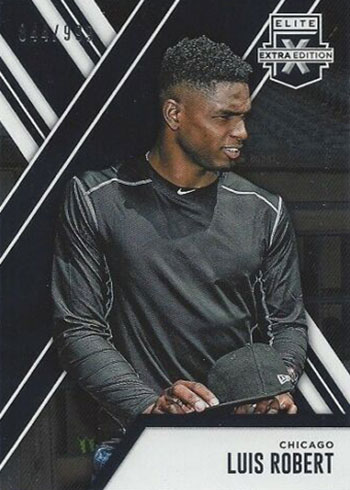 It might not have the same level of prestige as the autograph, but the 2018 Bowman Chrome Prospects Luis Robert certainly holds its own. His first MLB card, prices rose steadily in anticipation of his White Sox debut. If you’ve got a forgotten stash of 2018 Bowman sitting in a box, this might be an excuse to dig them out and go digging for. 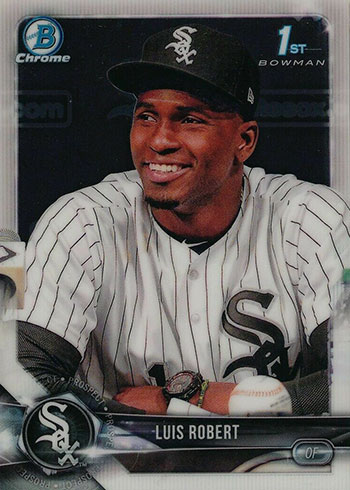 A traditional minor league issue, the 2018 Winston-Salem Dash Choice Luis Robert is one of his tougher early issues. Primarily available through the team, there weren’t a ton to begin with. But it’s also seldom seen out in the wild. 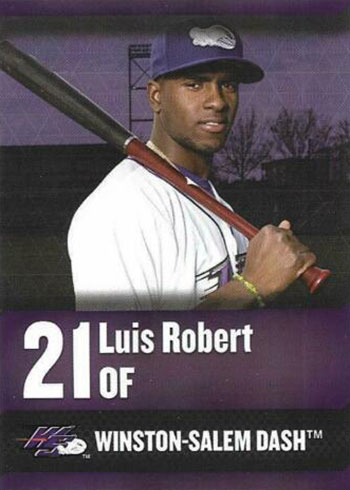 The swirling combination of black, blue and pink help make a modern backdrop. The foil stock, sticker signature and retail distribution help keep the price down compared to Robert’s Bowman Chrome autograph. 2018 Bowman Platinum was a Walmart exclusive. While not particularly rare, boxes and packs could be tough to find in some areas. 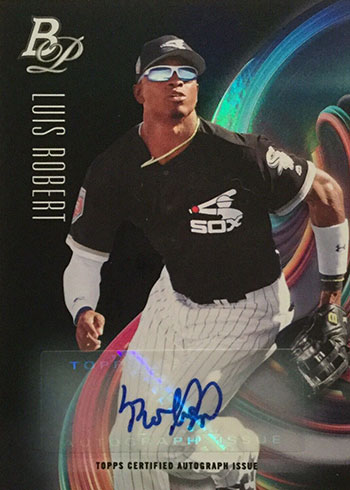 Topps tried High Tek out with Bowman for a couple of years. Despite some big designs and acetate stock, it didn’t translate well to the prospect side of the hobby. Still, when it comes to early Luis Robert autographs, there aren’t any others that have a look close to the same as this one. 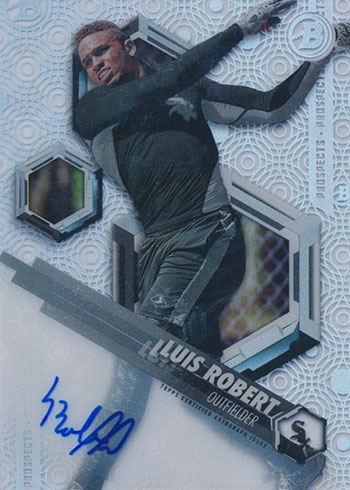 If the Bowman Chrome autograph is out of reach but you’re a fan of chrome, the 2018 Bowman’s Best Luis Robert might be where to look instead. Not nearly as expensive, it still has chromium stock, MLB marks, Refractors and an on-card signature. 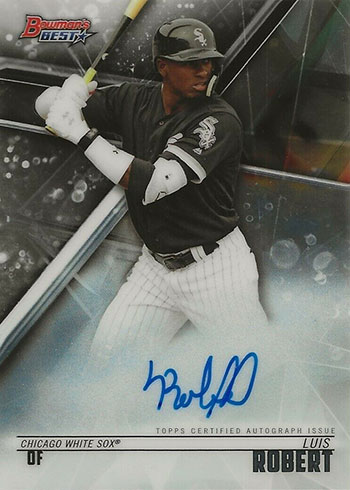 Most of the 2018 Immaculate Collection Baseball checklist revolves around major leaguers past and present. However, there are pockets of prospects like this Luis Robert. It’s more premium in nature compared to his 2017 autographs from Panini and it’s one of Robert’s few early cards to include a jersey swatch. 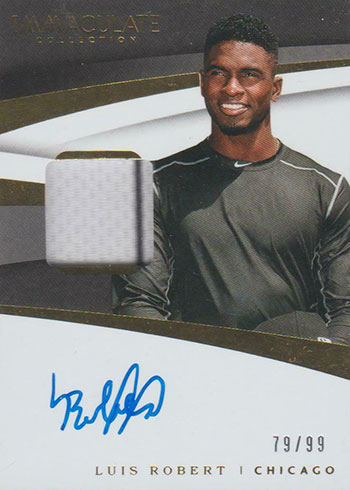 Chrome designs are pretty standard, especially when it comes to early autographs. Leaf Flash has the stock, but the speckled backgrounds make for a completely different aesthetic. Like Bowman Chrome, it has an on-card autograph but the significantly lower price tag and presumed smaller print run make it an attractive alternative to some. 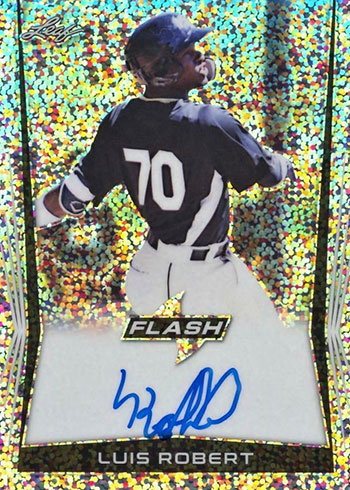