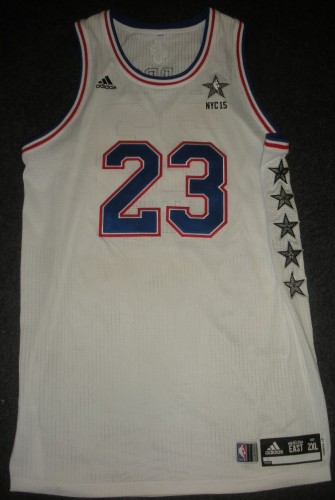 In the wake of the 2015 NBA All-Star Weekend, fans were able to bid on game-worn and event-worn jerseys from the biggest names in the sport and some of the prices for them soared to impressive heights.

With eight different items reaching final bids of over $10,000 over the past few weeks, collectors and fans were willing to place high bids for a piece of history and the most expensive turned out to be the white Eastern Conference jersey worn by Cleveland’s LeBron James during the first half of the 2015 NBA All-Star Game hit $35,620 after 27 bids. Even King James’ warm-up jacket was a hot commodity as it garnered a bid of $10,095 before the gavel dropped and his shorts went for $6,125. 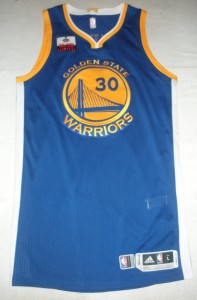 The next-closest piece of memorabilia from this annual event was Kevin Durant‘s Western Conference jersey that drew a $18,720 bid while Dirk Nowitzki‘s was not far behind with a final total of $17,220. The only other Eastern Conference jersey to go for five figures was that of Carmelo Anthony ($15,160). Stephen Curry was a big draw as well, as his game jersey ($13,060) was outdistanced by his event-worn Golden State Warriors shirt that he donned while winning the Three-Point Contest.

Even after Russell Westbrook’s record-setting performance where he established a new All-Star standard for most points in one half, his Western Conference jersey only pulled in $11,131. Perhaps an even bigger surprise was Penny Hardaway‘s Orlando Magic jersey worn during the Shooting Stars Competition as bidding was fast and furious before it ended at $6,520.