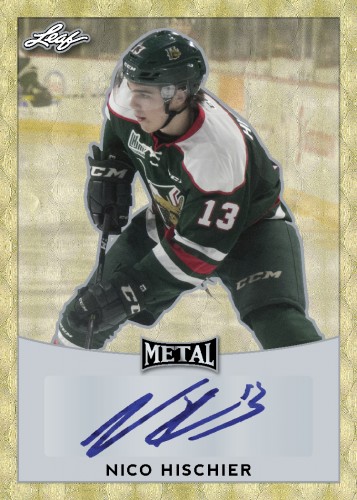 Another salvo has been fired by Leaf Trading Cards as the company has just announced an exclusive multi-year autographed trading card pact with prospect Nico Hischier, who is regarded as the potential second overall pick in the 2017 NHL Entry Draft.

The Halifax Mooseheads star had a phenomenal 2016-17 season as he led all QMJHL rookie performers in goals (38), assists (48), and points. He captained a side at the 2017 CHL/NHL Top Prospects Game and was named his league’s Rookie of the Year and Best Professional Prospect. 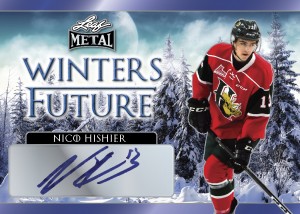 “Working with Nico, along with Allain and Jordan from RSG Hockey has been an exciting and rewarding process,” said Leaf CEO Brian Gray in a press release. “To see an agency thinking outside the box and aggressively marketing their athletes is refreshing in a traditional sport like hockey. Nico is now part of that new movement in the hockey world.”

This deal will certainly have an impact on future NHL and NHLPA-licensed products from Upper Deck as Hischier’s autographs will not be part of them until his contract with Leaf expires.

Where this deal also becomes interesting is due to the fact that Leaf will not be producing trading cards licensed by the Canadian Hockey League next season. The company has existing exclusive deals with young players like Buffalo Sabres star Jack Eichel, potential first overall pick Nolan Patrick, and top 2018 prospect Joe Veleno. 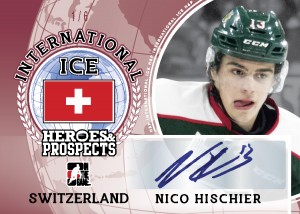 While terms of the deal were not released, Gray offered some additional personal thoughts in the press release.

“We are excited that we could reward Nico’s once in a generation talent with this near record setting deal! This deal will allow the company to exclusively market signatures of the future star for the foreseeable future. This gives Leaf the top two players entering the 2017 NHL Draft with Nolan Patrick already added to our stable of exclusive athletes!”